You are here: Home / Eureka Green / Mongolian Bankhar, The Savior Of The Livestock And Steppes

Nomadic lifestyle has been a culture for Mongolian people since ancient times. Herder families usually go nomadic since it would be easier for them to feed the livestock by moving from one place to another, since the steppes can supply them infinite amount of animal food.

However, apparently the herders and their herds are not the only ones that roam around the country for resources. Natural predators like gray wolves, lynx, and snow leopards are also exploring the vast steppes of the country to find something to fill their tummies.

That’s why, sometimes the predators and the herders have to encounter each other in a bloody battle (literally there will be blood in the battle). Although many herders, and maybe the predators too, feel that it is what they are meant to do to survive in the wild, however it may risk one’s future.

The Guns And Vehicles 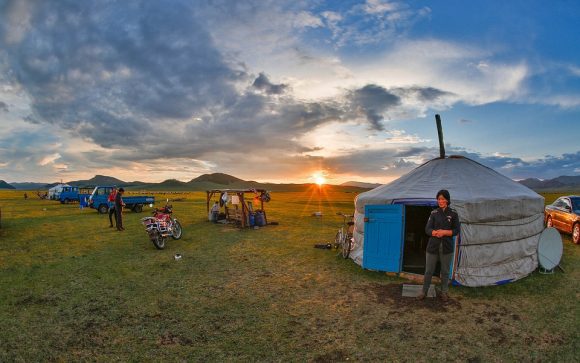 Livestock predation to the herder’s animals can ruin the life of the owner, mentally and economically. A pack of wolf can kill tens of horses and much more livestock in just an attack. That’s why, one way to prevent it is by hunting the predators first before they hunt for the herd.

The wolves, lynxes, and snow leopards are born with their own natural weapon, sharp claws and fangs. However, the only weapon human kinds are born with is their intelligence. In real one-on-one combat, the predators might seem to have the benefit, that’s why human are not really into physical combat with them.

Humans are more likely to ‘cheat’ on the combat by using tools to fight the predators. And in this modern era, the tools we use are greatly improved from what it used to be. Instead of holding swords and riding horses, nowadays humans are equipped with high-powered guns and fast vehicles to outrun the predators.

We can say that we have increased our capabilities to fight those predators away from the herd, but is this a ‘healthy’ upgrade? Probably not, since we know more about our power upgrade but not about our limit in this fight.

For example, since the combatant upgrade that the herders got, the population of snow leopards in Mongolia has declined steeply. Nowadays, it is predicted that there are only about 500-1000 of them left in the Mongolian wilderness. And if this predator ‘predation’ keeps on going, extinction might be the final result.

As said before, if this predator ‘predation’ keeps on going, the already endangered animals in Mongolian steppes might go extinct in the end of the war. That’s why, we need to fix this problem, both for the herders and the predators.

Actually, since the ancient time, the solution has been provided and some Mongolian herders have actually owned it. The solution also has been the part of those people’s nomadic lifestyle, although not many of them realized it.

The answer for this problem is Mongolian Bankhar guardian dogs, a kind of dog that has long been a part of Mongolian nomadic people as pets. Widely known as Tibetan Mastiff, Bankhar dogs are already treated as the guardian for livestock in Tibet.

The guard of the dog can be the solution for both avoiding livestock predation and retribution hunting. In Tibet, this kind of dog has been used to get large predators off the livestock, not only wolves and leopards, but also bears. 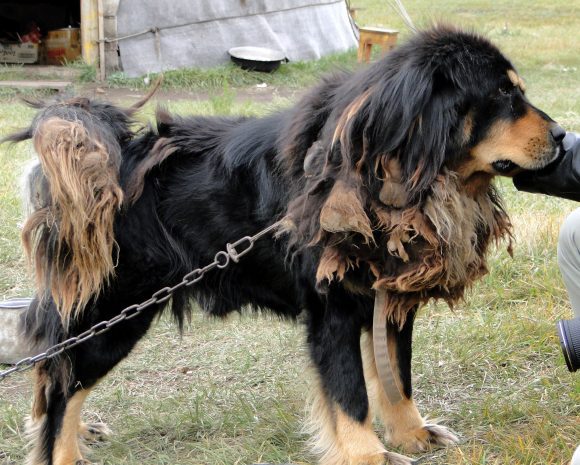 The methods of using Bankhar dogs as a way to eliminate livestock predation is both ancient and new in Mongolia. How can this possible? The reason is because once the dogs were culled in 1960s because of misinformation telling that the animal might spread plague.

Because of the misunderstanding in the mid-20th century, the tradition of using Bankhar dogs as guardian dogs was slowly forgotten. Delgeriin Tserenkhand, a Mongolian resident who once saved a puppy of Bankhar from the street said that he never knew what the greater good he actually did.

“Saving the dogs means saving Mongolian culture,” he said to AFP. “Bankhars are very special. They’re comfortable around humans and livestock, but have a strong protective instinct when approached by predators,” said the man who now is a Bankhar breeder.

Bankhars, being native to Mongolia, and the breeds such as Great Pyreness or Anatolian Sheperd have proven its use to prevent lethal control to predators. Data showed that introduction of guardian dogs may result in elimination of livestock predation by more than 80%.

It shows that reintroducing the dog into herders is the more effective way to save the livestock than shooting the predators in the first place. Not to mention that they are good company too for human in daily lives.

Savior Of The Soul

Actually, not every single Bankhar was eliminated during the culling in 1960s, but most of the guardian dogs were treated merely as pets since then. Taking them out of the house was too dangerous for the Bankhars since they would either be the culling target or ‘causing the plague to spread to the livestock’.

And reintroducing the dogs as the guardian of livestock was the right thing to do. By doing it, the herders can maximize the real ability of the dogs, as the fighter of predators and the savior of steppes wildlife from gunshots.

“Bankhars can run quite fast, are heavier than Mongolian wolves and quite violent when it comes to another dog or snow leopard coming into its territory,” said Elfstrom. He told a story where the presence of the dog could give huge benefit to the herder and the nature.

The story was about a 68 years old herder who used to only let his livestock to graze at some safe points where he can watch the whole herd to prevent predator attacks. It made him have less choice of place to herd, and the steppes more prone to overgrazing.

However, after he adopted a Bankhar, he got more choice of places to let the livestock graze that allow the grasslands flourishing. He can also do other chores while leaving the livestock under the guard of the dog. Based on this story, we can see how much of the dog can give benefits to the herders.

“He fell in love with the dog, and the dog’s interest in the sheep caused him to change how he was herding. This one dog got him feeling the old pride and tenderness of how he used to tend to stuff with his grandfather,” Elfstrom said. So, we can say that Bankhar is not only the savior of the steppes, the predators, but also the human souls.