You are here: Home / Eureka Green / You Should Welcome Jackfruit, The Savior, To Your Tables

Commonly grown in tropical area, jackfruit can now be found anywhere in the world nowadays. Originated in India, this plant has widespread throughout Asia, South America, and Australia in last few decades.

The reason why many countries are eager to adopt this plant is because this plant was said to be the savior of the world. No, it is not about saving the world by becoming alive and fight the aliens, but by providing the nutrition we need to survive.

This plant can provide hundreds of fruits at once, assuring that it can feed many people in just one fruit season. Not only the fruit, the trees are also huge enough to provide a lot of woods. People even compare the size of the trees into majestic eastern oak of United States of America.

But jackfruit is more than that, and in this article we are going to talk about this future ‘savior’ of humanity. 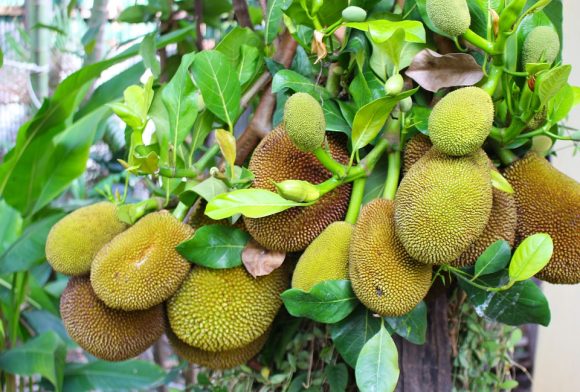 As mentioned before, in a single fruit season, a single jackfruit tree can give us hundreds of fruits at once. If you have never seen any jackfruit tree, you might think about small-sized fruits hanging on the trees, but if you have seen one, you should know how wonderful it is.

The average weight of a jackfruit is about 10-15 kilograms, with the record stated that the biggest jackfruit ever discovered weigh about 45 kilograms. The fruit itself can reach 1 meter long, thus if you see its tree when it is fruiting, you will see a huge group giant fruits hanging on the height.

The size of the fruit comes with the amount of flesh to be consumed. About 80% of the fruit’s weigh comes from the edible part of it, whether it is the fruit flesh or the seeds. Yes, you can also eat the seeds after cooking it.

Imagine buying a whole jackfruit weighting about 3 kilograms and able to eat about 2.4 kilograms of it. Pretty sure you will get swamped just eating one. Remember that there are tens of it in just one tree, so by planting just a single jackfruit tree you can simply feed many people.

According to National Public Radio, jackfruit is “high in protein, potassium and vitamin B”. A cup of it also contains about 3 grams of fiber, 2.8 grams of protein, 739 milligrams of potassium, 37 percent of a day’s worth of vitamin C, and 1 gram of fat.

However, you might not want to eat a whole jackfruit in one sitting, because you will get full by eating just 10 or 12 bulbs. While a single fruit can contain about 50 to 500 bulbs. See how many people can be fed, healthily, with just one jackfruit.

“It’s a miracle. It can provide so many nutrients and calories, everything. If you just eat 10 or 12 bulbs of this fruit, you don’t need food for another half a day,” Shyamala Reddy, a researcher at University of Agriculture Sciences in Bangalore, India.

So, the size of a single jackfruit is enough to fill many people’s tummies. Not only that, it can provide that much amount of nutrition to those people. Pretty much like the answer for fighting world hunger, isn’t it?

It seems like a good idea to fight world hunger with this fruit. “It is easy to grow. It survives pests and diseases and high temperatures. It is drought-resistant. It achieves what farmers need in food production when facing a lot of challenges under climate change,” said Danielle Nierenberg, president of Food Tank.

It adds another reason for us to start cultivating this fruit. But how can we have just heard about it recently? Apparently, we should start spreading the idea from now. The reason is, this fruit has not gained the fame it deserves, even in India which is where the fruit’s originated.

“I think it could play a much more important role in diets than it currently does and be a staple,” said Nyree Zerega, a researcher at the Chicago Botanic Garden. Zerega has studied about this fruit in Bangladesh for years and discovered that in recent days this fruit is not as important as it was decades ago.

In India, about 40 to 50 years ago, this fruit was indeed considered as important staple. But nowadays, this is considered as a ‘poor man’ food. Nowadays, there are only two commercial-scale plantations in India which are still actively operating.

“In the country of origin, it is just not understood. There is an inferiority attached to jackfruit. Any farmer would happily carry an imported apple in his hand rather than jackfruit,” said Shree Padre, a farmer to The Guardian.

What Can We Do 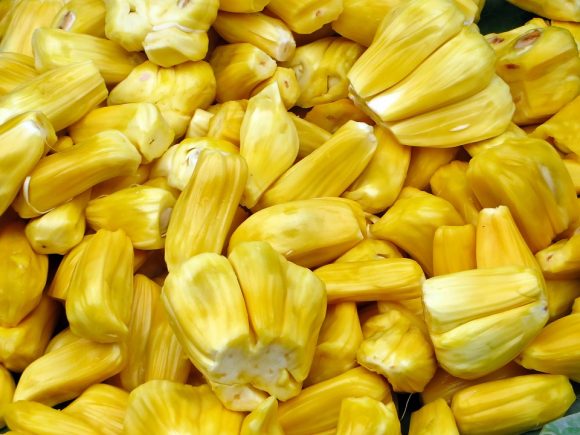 Finding it is hard to promote jackfruit from only just its nutritional content? Then you should know that this fruit is more than that. The seeds can be consumed too, but you need to cook it first to make it edible.

“In addition to consuming cooked young jackfruit, ripe jackfruit, and jackfruit seeds, there are also many food products with longer shelf life that can be made from jackfruit,” said Zerega. One of the most famous food made of this fruit is Gudeg, an Indonesian cuisine coming from Yogyakarta.

The timber from the trees also has its own characters, making it usable for furniture, construction works, even making musical instruments. However, not many people are willing to utilize it. “It is just not being utilized,” said Zerega.

It is an all-in-one plant, and there are many reasons for us to start planting it to fight many of our problems nowadays, including world’s hunger. “We just don’t have a choice. We are going to have to explore some of these alternative to make sure we are going to be able to nourish people,” said Dr Jim Yong Kim from The World Bank.