12 Creepy Crawlies that are Actually Harmless or Beneficial

You are here: Home / The Species / 12 Creepy Crawlies that are Actually Harmless or Beneficial

Some to most of us avoid insects unless they’re pretty like butterflies or dragonflies. Some of us are straight up scared of them and are so ready to swat or kill them the moment we see them. But did you know that some of those creepy crawlies are actually harmless and/or beneficial? Here are the list.

This bug has a lot of names like armadillo bug, woodlouse, or pill bug. When you were younger, you might find them in your garden and even play with them. Even though you might be a bit grossed out or scared of this bug, you shouldn’t. Roly polies aren’t precisely a bug either, since they’re more closely related to lobsters (like an isopod). In fact, they have gills!

If you’ve ever been stung by a wasp, you absolutely don’t want to see one or get near one ever again in your entire life. But you should let this one go, because it’ll benefit your garden.

The adult female of this species inject eggs into their host like caterpillars, moths, beetle larvae, and aphids. The larvae will feed inside their hosts and the host dies once they’ve grown.

Sounds horrid, I know. But if you’re growing a garden where unwanted insects could potentially destroy your plants, you’ll want these wasps even though you might not like it. To bring these wasps over, plant dill, parsley, wild carrot, and yarrow.

So, the next time you see a hornworm covered in small eggs or pupae, don’t kill it with fire. You’ll be somewhat grossed out or scared, but leave it alone. An army of wasps are going to surround your garden, but they will benefit you.

The larvae of tachinid flies burrow their way into garden pests like caterpillars from the inside. Therefore, you won’t have to worry about cutworms, which are moth caterpillars that feed on plants below ground. To invite adult flies to your garden, plant sweet clover and other herbs.

Read also: Researchers Are Trying To Feed Us Cockroach Milk, Why?

An insect species in the Nabidae family, these bugs are predatory. They feed on other insects like aphids, small caterpillars, leafhoppers, thrips, and other unwanted garden pests. You can collect them from alfalfa fields using a sweep net and release them around your garden.

Be careful, though. Even though they’re beneficial, they’re predators after all. Damsel bugs can bite you, and the bite is painful. But medically speaking, it’s not harmful. Best to leave them alone and let them live their lives. 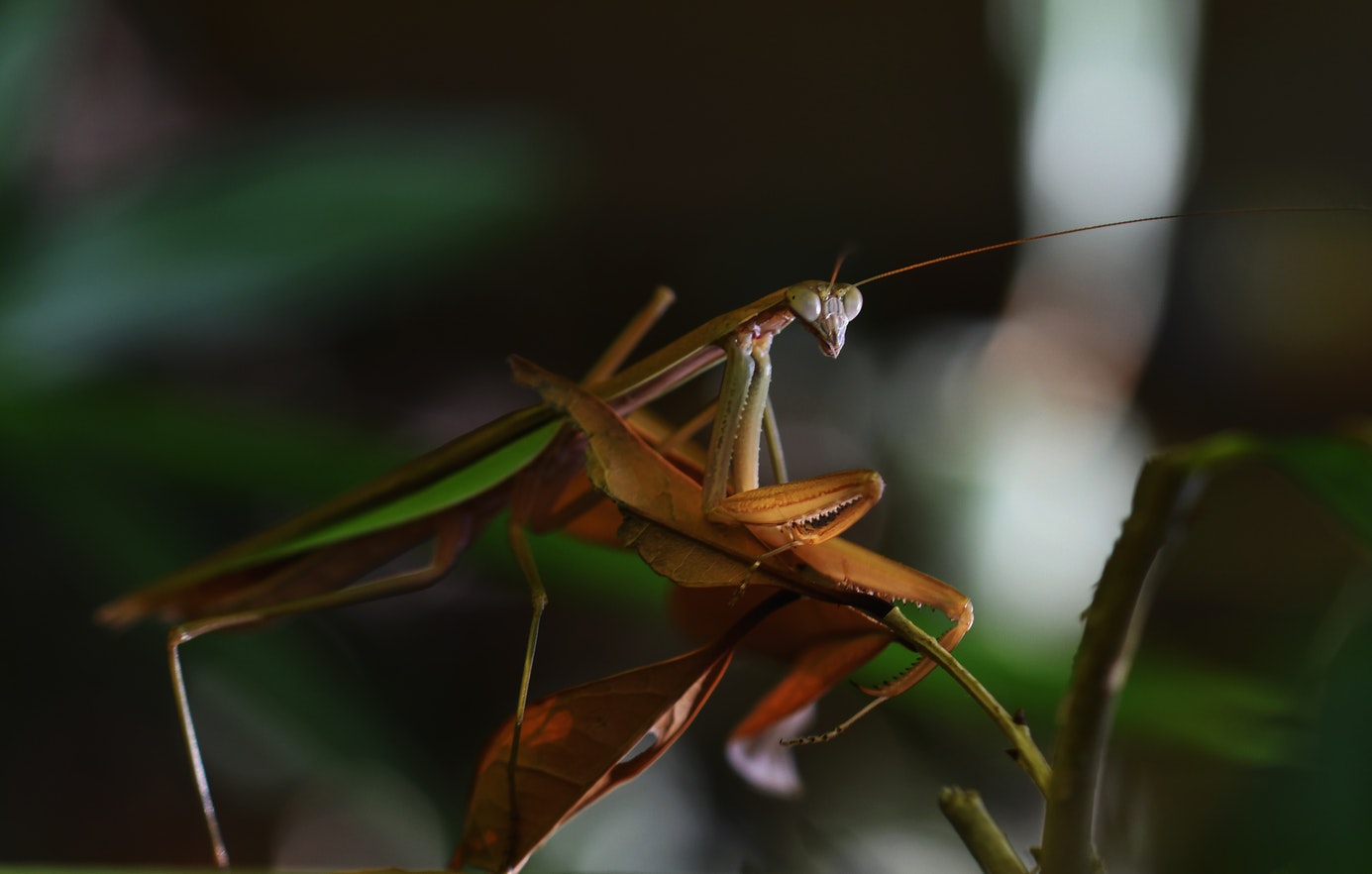 Many believe that mantises are endangered, but the common garden species are not. And they’re not protected by law. It is hard to find them in cities, though. I once found one just hanging out on a supermarket door handle. So finding one is some kind of a treat, but I digress.

Mantises are also predatory insects and they eat a lot of other insects. While they play a role in protecting your plants, they can kill your other beneficial bugs. Eating any insects, including their own, when they’re hungry is the downside of having mantises in your garden.

Have you got snails, cutworms, slugs, cabbage maggots, and all that pests? Ground beetles got your back. These beetles will devour any pests that live in the soil of your garden. And don’t question the effectiveness. Despite their rather small size, one beetle larva alone can eat more than 50 caterpillars!

Ground beetles usually hunt at night because they’re naturally nocturnal. They don’t usually find their way to your house, so you shouldn’t worry about finding one indoors. They also can bite, so you should just let them do their “jobs”.

Read also: 10 Invasive Species (Animals and Plants) That You Might Not Know Yet

Like mantises, soldier beetles can help you get rid of aphids and caterpillars, but the harmless and beneficial insects are also included in their diet, so make sure they don’t overpopulate in your garden. But the good thing about these beetles are that they also pollinate plants. Two birds, one stone.

Don’t splat or shoo these bugs when you see them because you think they’re stink bugs. The main difference is that these ones are smaller and they have some kind of a nose extension from the bug’s head. If you see a “third” antenna in between, then it’s spined soldier bugs.

Spined soldier bugs prey upon gypsy moth caterpillars and beetle larvae. To invite them to your garden, plant permanent beds of perennials so that these tiny predators could have a shelter. Oh, and unlike predatory bugs in this list, these ones are not harmful to humans (all stink bugs don’t bite or sting).

These bugs can be beneficial and not to your garden, depending on prey availability. This predatory insect will devour your garden pests when they’re available. However, when food source is scarce, the bugs will sip nectar and plant juice instead so probably you don’t want too many of them.

To get them to your garden, you can plant daisies, yarrow, goldenrods, and alfalfa. Minute pirate bugs bite humans as well. But the reaction only ranges from nothing at all to a similar reaction of a mosquito bite.

Read also: 5 Tricky Plants And How They Deceit The Insects For Pollination

I realize that stink bugs look alike, and it’s impossible to know each kind since there are 260 species of them in US and Canada alone. And it’s very true that some stink bugs like brown marmorated stink bugs are a pain in the neck, because they’re pests and an invasive species. But rough stink bugs are different.

And although the name is different, these bugs and spined soldier bugs are actually related. Similarly, this species hunt soft-bodied aphids, caterpillar, and beetle larvae. Unlike its other relatives, this species is actually a gardener’s friend. If you don’t know the difference yet, check it out here.

This is probably one of the only creepy crawlies that you like or at least tolerate. Don’t let the cute color and shape fool you. These bugs are actually predators that will help the plants in your garden. Because once aphids attack a plant, they will basically kill it.

The larvae, especially when they’re hungry, will do more damage to pests. Get angelica, coreopsis, dill, fennel, and yarrow to get these cuties.

Probably this is the prettiest creepy crawly kind in the list (though the larva isn’t). Adult and larvae lacewings eat caterpillars, mealybugs, thrips, and whiteflies. When you look at the transparent wings of this insect, you’ll think this species is only pretty. But like ladybugs, they actually have big appetite for slow-moving pets and they hunt them at night.

LIke predatory bugs mentioned before, lacewings can bite although rarely and the bites are harmless to humans. Therefore, you can admire their ferociousness or beauty from up close. Just don’t disturb them.

To lure these lacewings to your garden, plant coneflower, coreopsis, yarrow, angelica, cosmos, and sweet alyssum.

So which one is your least favorite? I used to hate stink bugs so much because I thought they were just as intimidating as cockroaches and they were just so flat and it was pointless killing them because of the odor (they always appear in my bathroom, I don’t know why, and this makes me uneasy). But now I know more about them and I’ll just shoo them next time I see ’em.

So what’s yours? Tell us in the comments below.