You are here: Home / Hello Earth / The Beauty, The Mistery, And The Facts About Kudzu

We know that beauty is relative, including the beauty of the nature. How can we say that? Take a look at this case. If you have ever visited or taken a road trip through Georgia or Alabama, you might have noticed something attractive.

You might have noticed that there are fields covered with green plants, making it looks surreal. That’s a beauty to be remembered, of course. However, that’s not always the case for environmentalists, because that’s something eerie for them.

We are talking about kudzu, a species of plant native to much of eastern Asia, Southeast Asia, and Pacific. This plant is an invasive plant, and with the appearance we already know how aggressive they are to surrounding environment.

Do we need to do something about it? Here in this article we are going to talk about kudzu, and the story behind it. 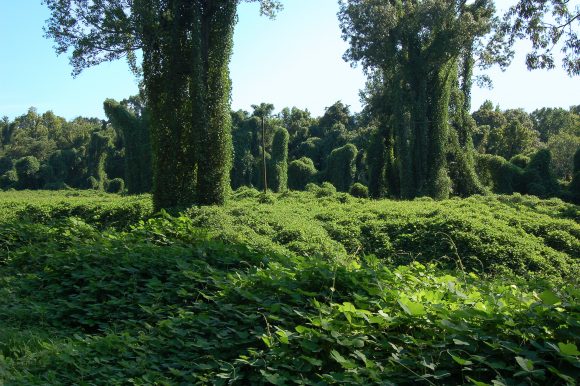 Kudzu, or some people call it Japanese arrowroot, is categorized as a member of genus Pueraria. The name is derived from its native Japanese name “Kuzu”. This plant is America’s most infamous weed nowadays, because of its nature.

The plant grows by climbing, coiling, and trailing its vines to almost everything around them, even trees and rocks. They grow fast and aggressive, and this is the reason why this plant always looks like covering the whole field everywhere they grow.

Kudzu can spread itself in several ways. One is by vegetative reproduction via stolons that root at its nodes, and the other is by rhizomes. Even though it is rare, but this plant can also spread by seeds contained in its pods.

During its growing state, kudzu requires much sunlight. That’s why, they are always trying to reach higher places, like trees or rocks, which result in its infamous cover. For the plant, reaching higher place is a matter of life and death, because they cannot tolerate long periods of shade. 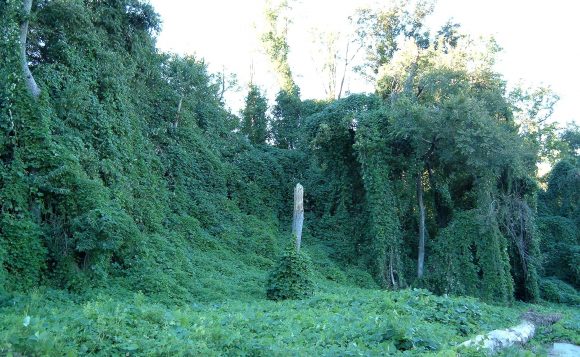 When they cover rocks and trees, it will result in a monster-like forms that most children fear. Even we can still see the shapes that look like creatures from another world. But don’t you know that those monsters, instead of eating us, can be eaten instead?

However, not many people like to eat kudzu. That’s why, this plant is let grow in the fields and become invasive. In many cases, people prevent the spread of this invasive plant by spraying herbicides. But this method doesn’t act as long-time solution.

Kudzu has covered hundreds of thousands of acres, and it keeps growing. The thing is, this plant grows best in areas where native plants have already been cleared. And once it takes root, the area will keep growing to the surroundings.

In its native place, kudzu’s growth is controlled by animal grazing and human consumption. In example, Japanese people are using kudzu as animal fodder and eat this plant themselves, since they know that it is highly nutritious.

But in United States, not many are fond to eat this plant. In areas where they grow, there are only a little herbivore to graze it or to give it as fodder. This is why in United States kudzu is considered as invasive plant, because simply there is no effective control for its growth.

Letting the plant to grow ‘well’ might be pretty risky. And as explained above, on non-native land, it can be an invasive plant that simply will eat everything. It might be the best if people in United States know the benefits of kudzu.

But still, it is sad that some people only consider it as a weed, even though the benefits are plenty. In New Zealand, this plant has been declared as an ‘unwanted species’. While in Australia, this plant is considered a problem for the nature.

Kudzu’s invasive nature is indeed scary. With its growth, it can cover the whole field in relatively short period. And because of its cover, it prevents basically two most basic needs of a plant to grow well: sunlight and moisture.

Some also consider that kudzu is involved in climate change. Changes in leaf results in changes of decomposition process and reduction in soil carbon. Native plant might also be at risk after this process, giving the presence of kudzu in non-native land a double threat.

Knowing kudzu has two contradictory natures, beneficial and invasive, so what nature is actually affecting us more? People in its native land might see it from positive point of view. But for those living in other side of the planet, this plant is not a good thing.

One example of the benefits is it can be used for soil improvement. Kudzu can control erosion and enhance the soil by its symbiotic relationship with nitrogen-fixing bacteria. This benefit has been recognized in Amazon basin in Brazil.

The fiber of the plant, known as ko-hemp, is also useful. It can be used for fiber art and basketry. Even traditionally it has been used to make clothing and paper. Not only that, some people in Southern United States have started to use it to make soaps, lotions, and compost.

And as mentioned above, people in East Asia and Vietnam have used it as food and beverages. People in Japan also use it for the replacement of corn starch. While in Vietnam, the starch is mixed with pomelo oil to make summer beverage.

If only those people who consider this plant a bad thing know that kudzu is highly beneficial, maybe we can have a better world. We know that fiber and corn starch are two of the most consumed resources nowadays, and kudzu can provide both.