You are here: Home / The Species / Underrated Animals: 7 Facts About Octopuses You Didn’t Know Before

Most of the times, you spot this tentacled animal in wildlife TV shows, YouTube, or on your plates. They’re master of camouflage, they eat crabs, they squirt black ink when threatened, those are usually the things when we try to explain about octopuses.

I personally also didn’t know much about them. But then I saw a short video showing a giant Pacific octopus reaching out to its keeper (it lives in a marine park) and sticking itself on him in a loving way. Then someone in the video said that octopuses are intelligent. They recognize different people and they have different personalities too.

That moment I thought to myself, so there’s more to them than meets the eye. If we’re to name intelligent animals, we’ll say dolphins, elephants, chimpanzees, dogs, but rarely (almost never) octopuses. And that is why I’m giving you some facts about this underrated animal.

1. This species and its family is so old but still rocking. 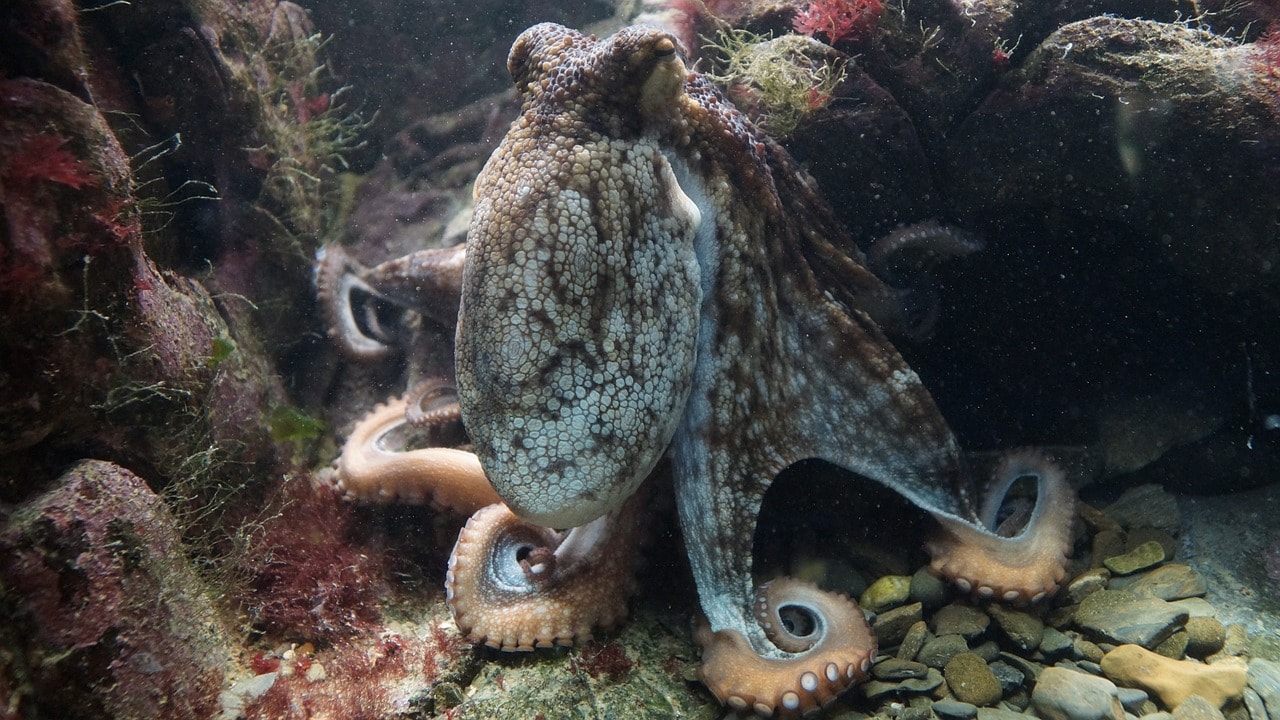 Cephalopods (squid, octopus, cuttlefish, nautilus) have existed since Carboniferous period, which is roughly 296 million years ago. There’s a discovered ancient octopus fossil called Pohlsepia that lived around that time. It’s now on display at the Field Museum in Chicago.

When you first see it, or if you just walk by it, it’s going to look like nothing more than a piece of rock. The fossil is ‘barely there’, but when you really look at it up close, you can see eight arms, two eyes, and a body (or rather, the head?) with a possible ink sack there (researchers aren’t sure about this yet).

The look of this fossil isn’t special compared to other fossils. However, this gives us an evidence that this tentacled species existed long before before there was life on land and way before dinosaurs. And what’s cool is, they’ve established and maintained their shape for a long, long time.

2. An octopus has three hearts. 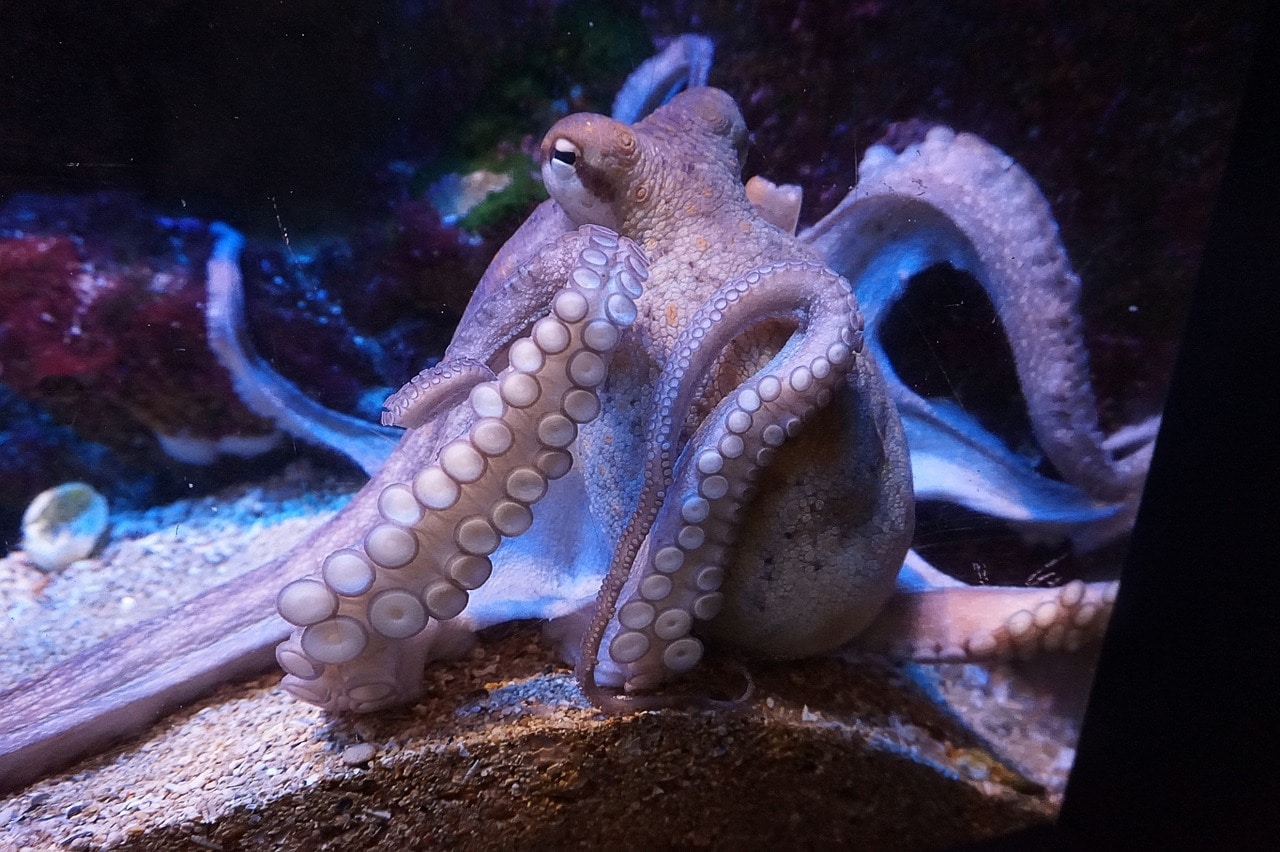 Is this probably why they continue to exist until now? Probably. But anyways, each octopus has one large heart and two smaller ones. The small hearts are located close to the gills in order to pack its blood with oxygen before transferring it to the large one. The large heart pumps this oxygenated blood to the rest of its organs and body.

Interestingly, the heart stops beating when an octopus swims, and it can be exhausting for octopuses to keep swimming. So, they prefer crawling (more like walking, I should say) along the seafloor. So they use their four arms for walking and the front four to be their “hands”. In this video below, the octopus even uses only two arms like a human and it’s so funny.

Now, walking makes them vulnerable to predators. To protect themselves, some octopuses carry protection around with them like coconut shells. Should danger arrives, they can quickly hide inside the shells.

3. Their arms have a mind of their own. 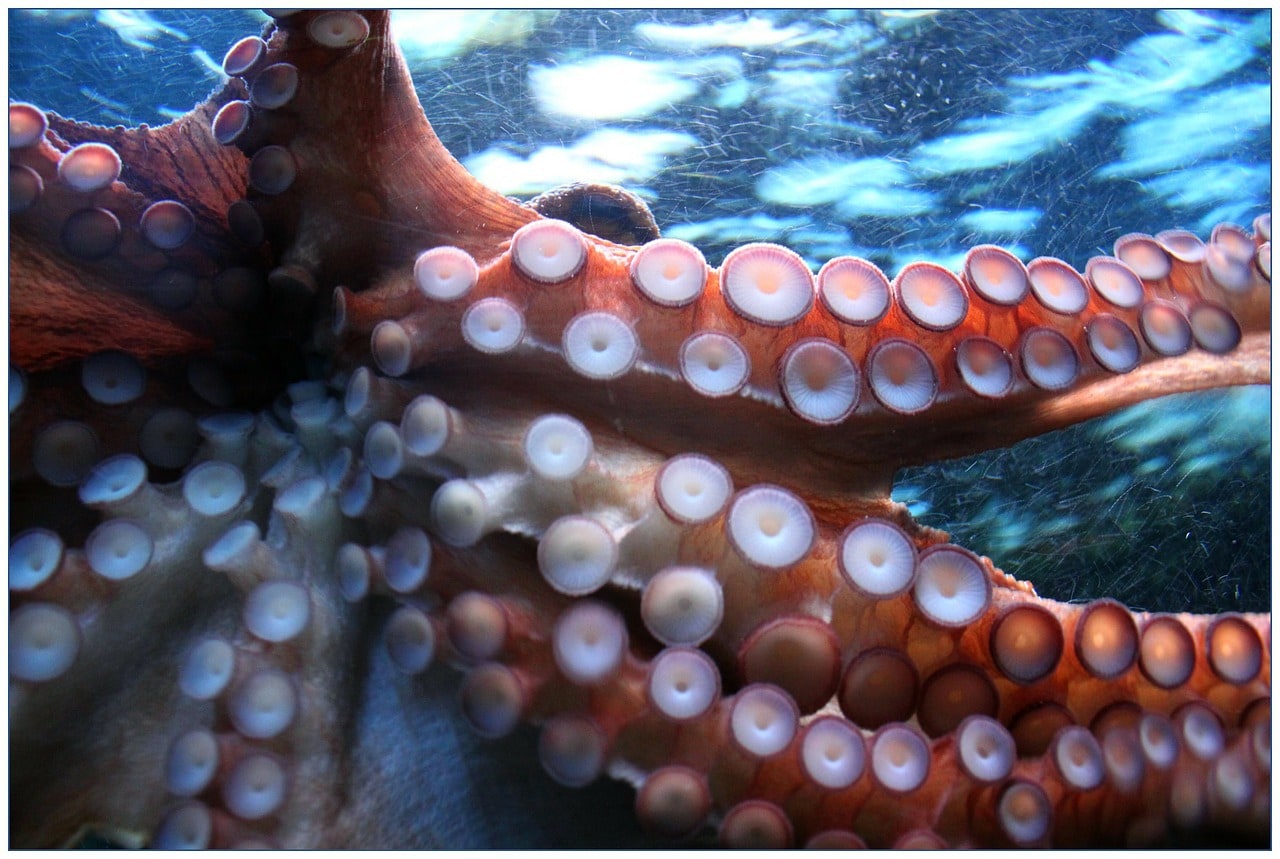 You might think that these creatures must have big brains. But their brains are around the same size as birds. Despite that fact, octopus is in the Earth’s most intelligent animals list. In the wild, they frequently use tools to open some shellfish, they can solve problems through observations, and they can hide themselves like I’ve mentioned.

Okay, back to brains. Octopuses’ brains are small, but that’s not all. The brain doesn’t do all the thinking for the animal. You can find about two-thirds of octopus’ brain cells in each of octopus’ arms. This makes them a great multitasker.

Like my example above, an octopus can walk while carrying two coconut shells (possibly searching for goodies at the same time). They can also try opening a shellfish while checking out a cave for more food. Because of the neurons, a detached octopus arm still reacts to pain. When researchers pinched a severed arm, it jolted away in pain. 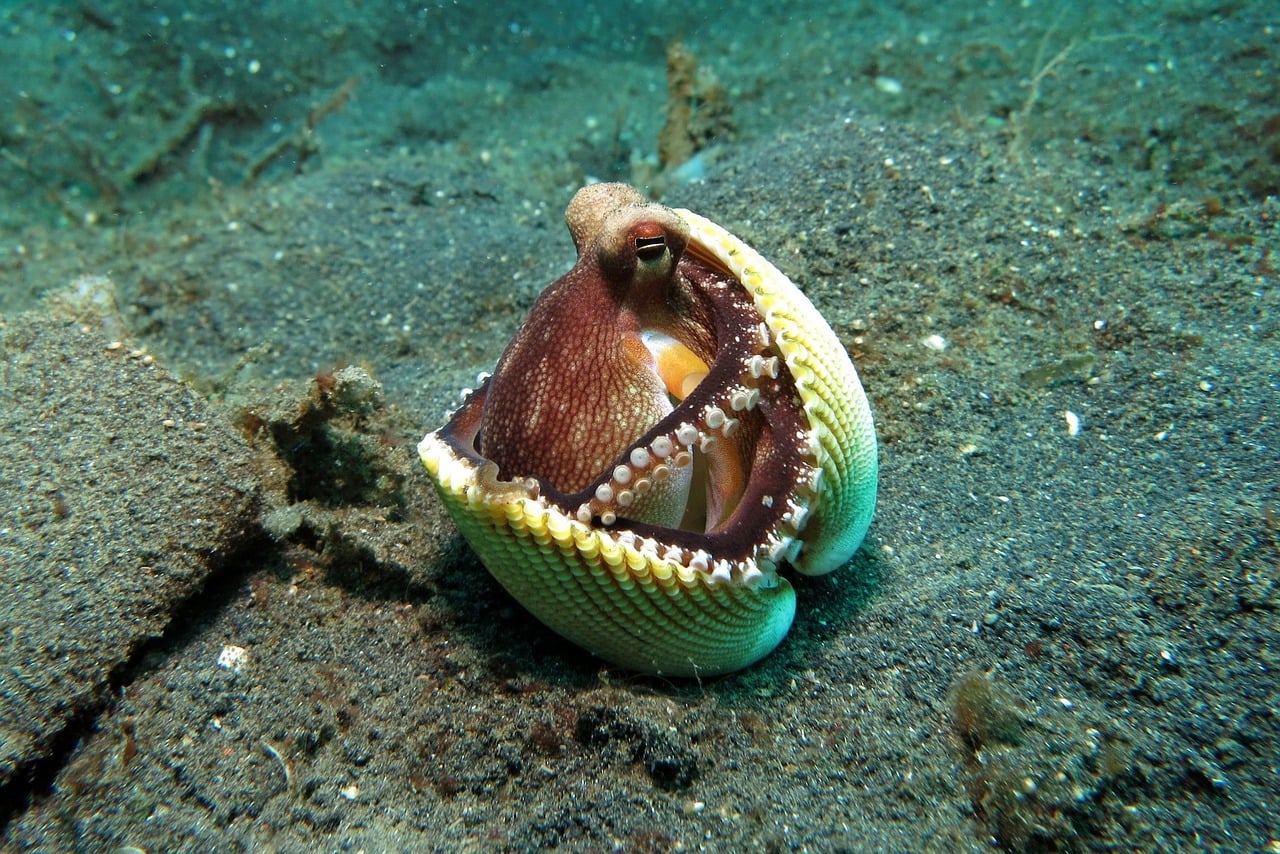 Octopus are very curious, playful, and in need of good stimulation. A scientist concluded that they can engage in activities we humans call “play”. The scientist said that one specimen continuously pushed a plastic bottle over at a stream of water that flew into its tank. It was almost like it was bouncing a ball underwater. Some were found playing with toys too.

Octopuses are active animals, and without proper stimulation, they can get extremely bored and stressed. In one experiment, some octopuses were put in tank full of interesting decor like shells and flowerpots, while the rest lived in plain tanks. The ones in plain tanks were so bored that they ate their own arms.

However, the “self-mutilating” ones stopped eating their own arms when they were moved in tanks with hiding spots and decoratives. So similar to human, don’t you think?

5. Some of them are not at all intimidating or scary 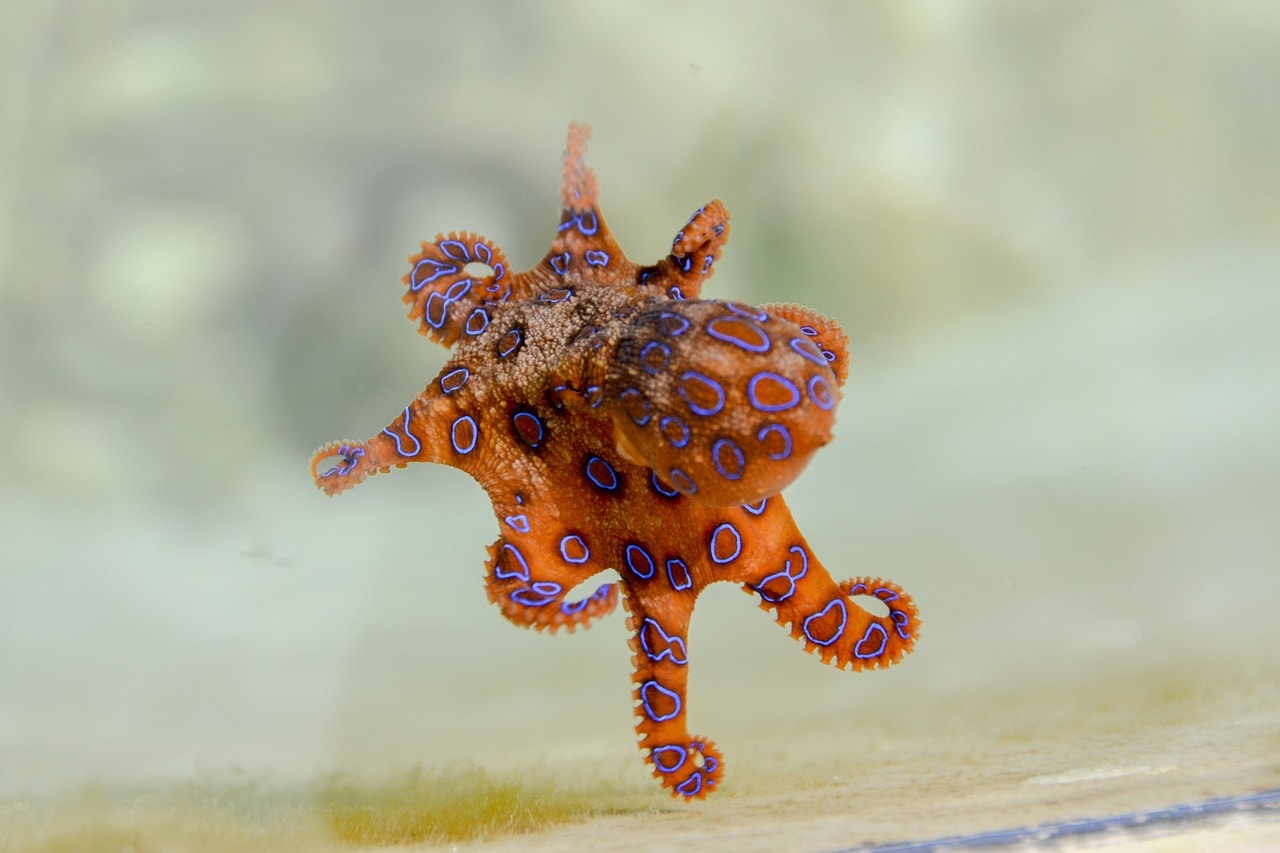 Gargantuan octopus or squid is frequently put in depictions about sea monsters like the Kraken for example. This creates such a fear to them, but there are some species that are incredibly cute and adorable, like dumbo octopus and this googly-eyed squid.

Dumbo octopus got its name from Disney’s flying elephant cartoon. It has two fins on the sides that resemble ears, and when the fins move, they’re like ears flapping/flying. This species is small and “flies” around the ocean floor. Its small tentacles are webbed, so when they spread out, it looks like an opened umbrella.

If it doesn’t sound adorable, then you might want to check out this shy dumbo octopus that tries to hide in its own tentacles. 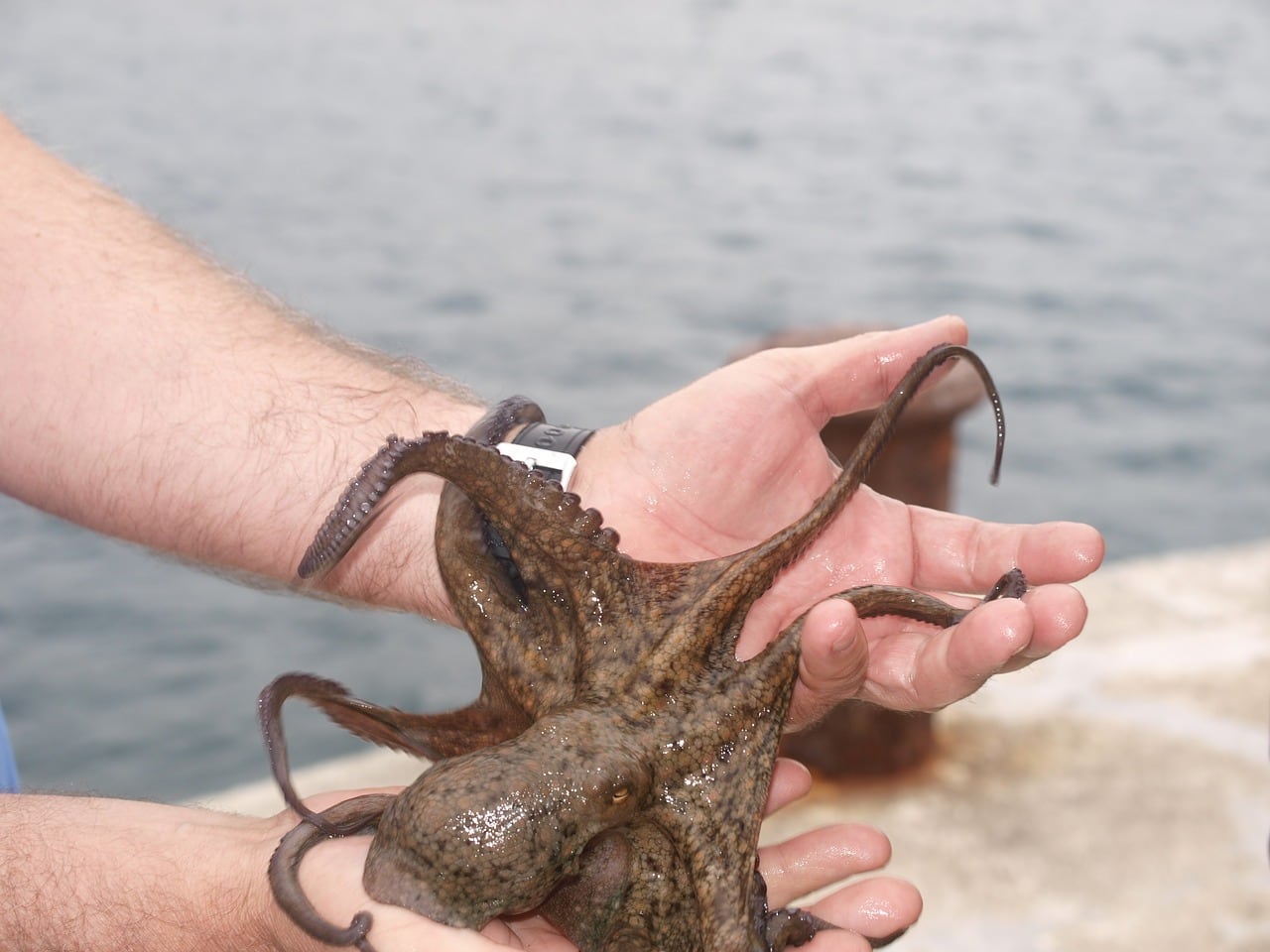 As I said in the beginning, octopuses are (surprisingly) intelligent and they can distinguish one person from another. Here’s a story to prove that.

There’s a guard at Seattle Aquarium that frequently shined her flashlight into some of the darkened spots. A giant Pacific octopus which resided there didn’t like it. As a result, every time that guard walked by, the octopus squirted water on the guard to show that it’s irritated.

Octopuses can adeptly use or experiment with tools. One video shows an octopus escaping from being shut inside a screw-cap jar by using its tentacles and turning it around. A scientist discovered one specimen unscrewing child-proof caps (the one you need to push down first).

Scientists believe that these animals have individual personalities. Each one has different responses and temperaments. In this National Geographic Article, one octopus can be outgoing, playful, and friendly to humans from the beginning while the other needs a bit more time and more reserved in nature. 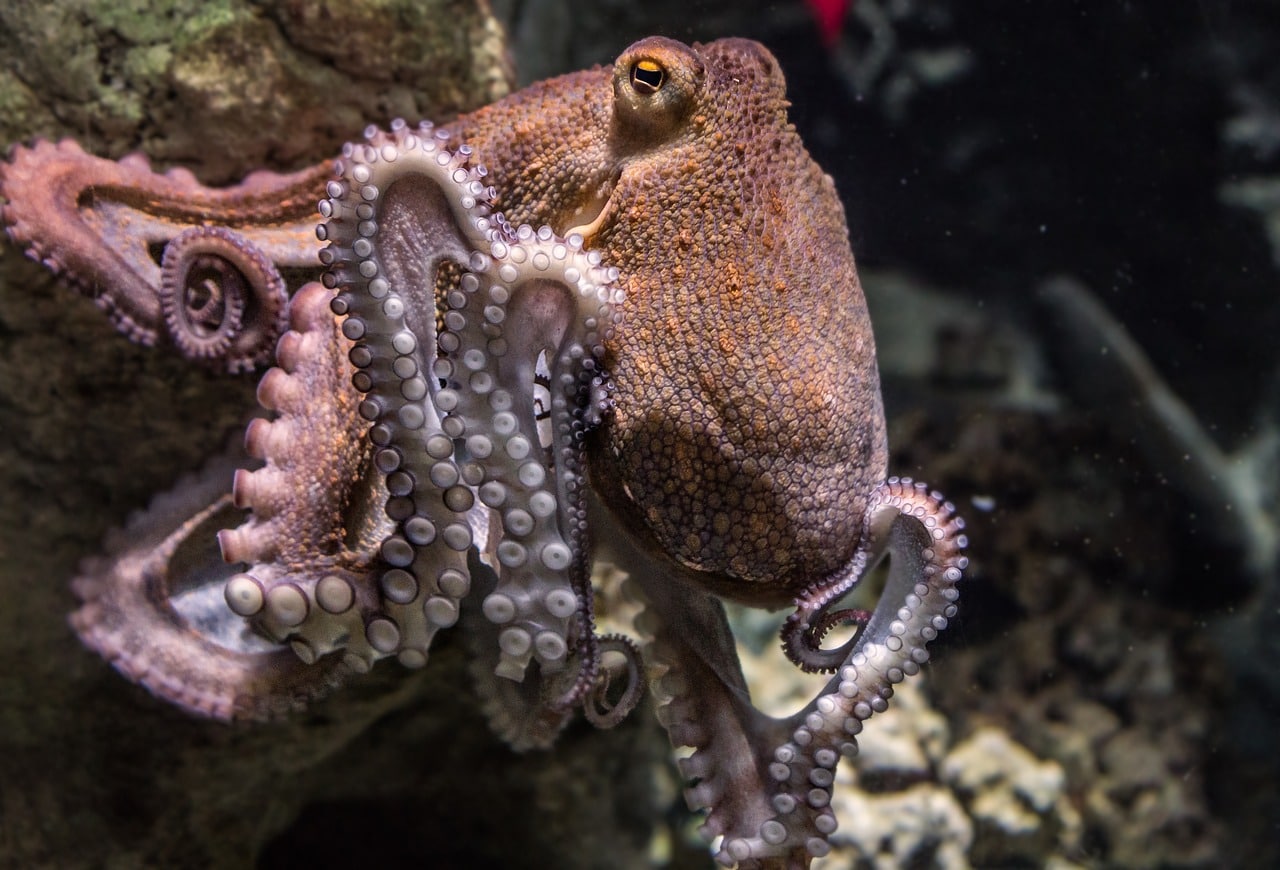 Did you know that octopuses have a knack and penchant to decorate their homes? Octopuses live in small homes like natural rock or corners in sunken ships, and there are some stones and shiny objects around it. Octopuses like the blings!

Researchers discovered that octopuses in captivity likes shiny objects. In the wild, they’re willing to travel across the ocean floor to pick up shiny items and other decoratives like crustacean shells. When they get back, they arrange them to build a “garden”.

This probably explains why Squidward is smarter than other characters and he likes to keep his house neat and pretty. Probably also explains why Ursula is so obsessed with Triton’s trident.

But anyways, those are some facts that you might not know about octopuses. At first I was just neutral about them but when I learned interesting things about them, I can’t help but make them one of my underrated favorite animals. I hope that you feel the same too after reading this.

So do you think octopuses are underrated? Or do you have some other animals that you think are way more underrated than octopuses? Have you ever had an interesting encounter with octopuses (other than being on your plate)? Don’t hesitate to tell us what you think and/or your experience in the comment below.

15 Interesting Facts about the Octopus You Need to Know!