You are here: Home / The Species / Pangolins: Even Their Armor Cannot Protect Them From Extinction Threat

Many of us might still don’t know about the existence of this animal, but somehow this animal is one of the most famous creatures on earth. Meet Pangolin, or some call it as scaly anteaters, the only mammal in the world to have protective scales covering its skin.

One of the proves that this animal has gained popularity is when Dota 2, a globally recognized online game, chose to feature Pangolier the Pangolin as one of their playable ‘heroes’. The hero is considered as one of the strongest and deadliest hero in the game.

However, in real life this animal is far from the image of strong and deadly. Instead it shows gentle and a little bit shy (or cowardly) nature. When this animal is threatened, instead of fighting like a hero (like what it is depicted in the game), it choose to defend itself by rolling into a small scaly ball.

Well, enough introduction of this animal, let’s learn more about it before it rolls up because of feeling shy and threatened by our attention.

They Don’t Know Armadillo And Anteaters 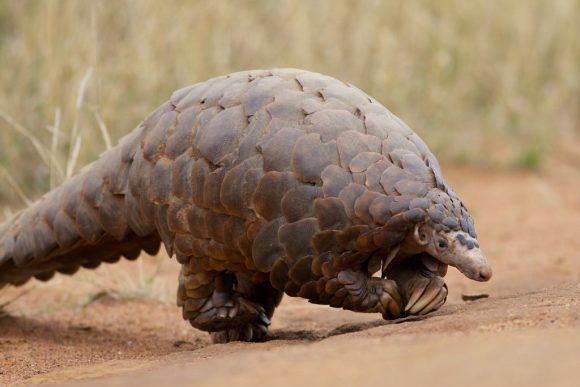 With an appearance like a living pine cone, pangolins are actually easily distinguishable from other animals alike. The species range in size, starting from 30 centimeters to 1 meter long. Pangolin’s diets consist of various ants and termites.

This animal has extremely long tongue, which is pretty useful for them to lick those small insects, like what anteaters do to feed. Indeed many people mistaken this animal for armadillo and anteater, but actually the they are not related to each other.

In fact, armadillo is indeed related to the anteaters, and they also come from the same family as South American sloths. While pangolin’s closest relative are big carnivores that become their natural predators nowadays.

The animal has two kinds of defense mechanism to protect itself from its predatory cousins. The first one is by emitting noxious-smelling chemicals from glands near their anus to scare the predators away and if it doesn’t work they will curl up into a small scaly ball. 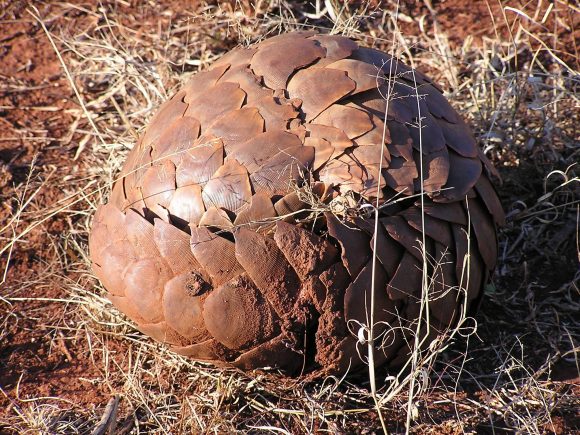 Like mentioned before, one of the most recognized physical feature of this animal is definitely the scales covering its skin. Every Pangolin is protected by about 120 pieces of scales lined up neatly to fully cover its body from head to tail.

The scales are made of keratin which is pretty similar to what our finger nails are made of. So, we can say that the entire body of this animal is covered with nails-like armor which make up about 20% of its body weight.

The armor is its main defense mechanism and they rely on it a lot. It can be seen on how anytime this animal is sensing danger it will curl up its body, showing a ball full of scales. And this defense mechanism is pretty much effective to get rid of their natural threats.

The scale is hard enough to protect the rest of its body. It needs extra hard work for predators like lions, tigers, and leopards to penetrate it using their claws and fangs. Most of the time, the predators will give up their prey before they can penetrate it.

An urban myth said that the scales of Pangolin is really hard, even shotgun bullets cannot get through it. The story said that a man who tried to shoot the animal ended up getting killed by its own ricocheting bullets. 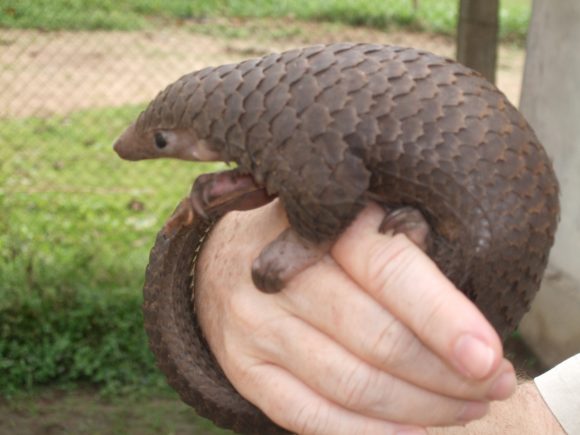 The scaly armor may be effective enough to protect this animal from its natural threats. However, their biggest threats might not come from the sharp claws and fangs of predators, but from human’s gentle touches.

Pangolins are currently listed as critically endangered animal, and you should know how can they come to this phase. It is because of us, human kind, who hunt down this animal for centuries that the population keeps on decreasing time by time.

Pangolins are hunted for their meat and scales which is said to have medical quantities. In many parts of the world, especially Africa and China, the demand for this animal is so high, making the price for one whole pangolin sold in black market sky high.

Just one piece of pangolin scale is worth up to $5! Multiply it by average number of scales an adult pangolin have, which is around 120, and the answer is about $600. Not only that, pangolin meat is also an expensive commodity in black market, worth about $300 per kilogram.

No wonder this animal is hunted down by human for its worth. Illegal poaching and trades of this animal has been their biggest threat. Like mentioned before, sharp claws and fangs of predators might not be able to penetrate the scales, but such defense mechanism doesn’t work for human since we can just take it away while it is still rolling. 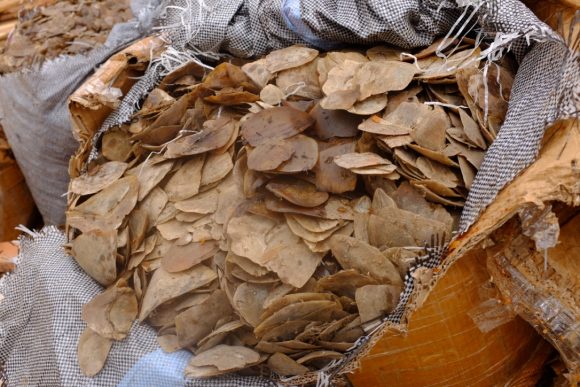 This animal is currently listed as critically endangered, meaning there are only a few individuals left in the nature. Yet the demand for it has not changed a little bit, people still want to hunt it down as much as possible.

In fact, pangolin is the most trafficked mammals in the world! Countries with the biggest pangolin consumption rate are China and Vietnam, since people in those countries consider this animal as a delicacy whose scales also work as traditional medicine for asthma, rheumatics, and arthritis.

However, still there is no medical prove about whether this animal has such medicinal quantities. That’s why international ban for pangolins trade has been issued. It means people in any country can no longer freely sell, buy, or serve foods made of pangolins and any of its body part.

But the ban still cannot control the black markets. In example, in 2013 about 11 tons of pangolin meat were seized in Philippines. Another example is taken from 2016 where Indonesian man was raided at his home where police found 650 frozen pangolins on his property.

Like we said earlier, this animal is one of the most famous animal in the world, but it apply mostly to those people in black market. It is time for us to bring the name of this animal to the light, so we can straightforwardly protect it from total extinction.