You are here: Home / Eureka Green / In The Future, Homes Might Be Powered By Concrete Structure

What if we tell you that someday our homes might be powered with concrete? Well if you think that this is just a joke, you might want to read about what Energy Vault is going to do. The Swiss company is planning to literally use concrete blocks to power up our homes.

The plan is not to gain energy from concrete blocks we usually use to build our homes, but rather to use it as energy saving batteries. The company is planning to use falling blocks assisted by gravity, a pure energy force, to power up our homes.

The project has started to take place since early 2020, and a prototype has been built in Switzerland. In the future, we might find towering concrete blocks like this all around the world as one of the greatest renewable energy batteries.

Want to know more about the project? Here in this article we are going to talk about it. 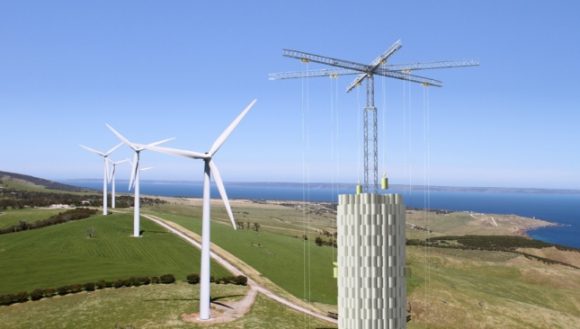 The idea to convert natural forces like the sun and wind to power up our homes might have existed since ancient times. In example, farmers in Indonesia have long used the power of river current to move the motor of watermills to help them with their activities in rice fields.

In this modern era, the plan to make use of renewable energy keeps on growing with rising demands from the public. More and more people realize that we cannot depend on non-renewable energy sources such as coal and oil.

And with rising demands, more and more countries have taken stance to be eco-friendlier. In example, big countries such as United Kingdom and Denmark have stated that they are going to cut down their fossil fuel consumption significantly.

However, there is one problem that we are still facing with the renewable energy generation. Most of it highly dependent on the presence of natural forces. Say for example, solar panels cannot generate good energy when the day is cloudy.

Even though they are working on making mega batteries for the renewable energies, the technology they use is unlike our modern battery. They don’t use chemicals to create the batteries, but rather make use of gravity force and kinetic power.

Kinetic power is the power or energy generated from moving objects, and wind turbines are the perfect example of it. Wind moves the turbines which then generate electricity, and the same process happens in water turbines or any other energy generators that use turbines.

Energy Vault is working on another method to move turbines without the presence of wind. What they use are huge concrete blocks that will fall down with the help of gravity. So, how can this be a battery thingy? The answer is by diverting energy generated from the generators.

Some part of energy generated by the generator will be used to pile up the concrete into towering structure. And when needed, “the blocks are returned to the ground and the kinetic energy generated from the falling brick is turned back into electricity,” according to the company’s website. 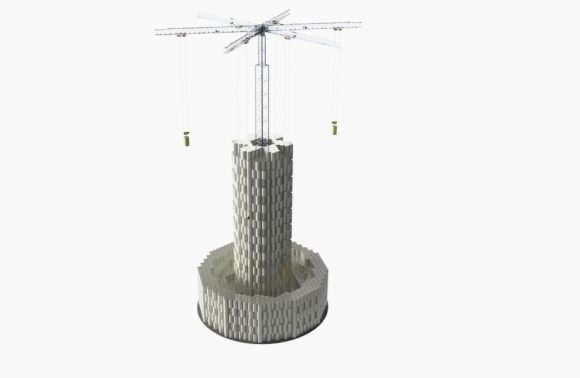 Talking further about the concrete battery, it can be used anytime we need sudden or emergency energy while there is no natural source to generate it from. And the amount of energy it can store varies, according to the company.

Energy Vault stated that that the structure can have the capacity of 20, 35, even up to 80 MWh, as well as 4 to 8 MW of continuous power discharge for 8 to 16 hours. The company said that the capacity, height, and design will follow the location’s needs.

And its efficiency level is so high, with the ability to restore 80% to 90% of energy stored. The ‘battery’ is said to last up to 30+ years, and would cost 40% cheaper than hydro plants.

What makes this structure greener is, the concretes are made of. They are made of concrete debris that would go to landfill in normal case.

The use of recycled debris will reduce the overall cost of the structure and it will also help us to tackle our waste problem. Further, even the company is planning to use various materials to make the concrete blocks to make it friendlier with different places all around the world. 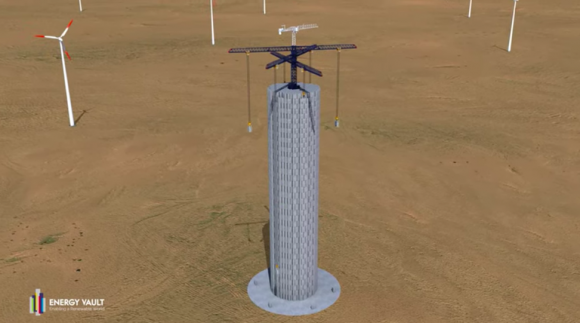 Currently, the project has been supported by Japanese multinational holding firm, Softbank. The firm has donated $110 million to develop the battery, and Energy Vault is planning to use the money to build two full-scale models in India.

“We at the Vision Fund want to come in when a technology is proven and it’s ready to scale. That’s what’s so exciting about this technology. It’s not a science problem. It’s fifth-grade physics,” said managing partner of SoftBank’s Vision Fund, Akshay Naheta.

For further missions, the company is opening up future investments so that their product can be built in every corner of the world. They say that there is no need to be hesitant to their innovation, because they use special software to keep the ‘battery’ keep working event during extreme weather condition.