You are here: Home / The Species / These Animals Are Considered Immortal By Researchers

Immortality is maybe just a myth that you find in the movies, but don’t you know that actually immortality may exist in real life? Yes, while death is inevitable, some creatures in the nature are able to cheat death.

Here are the animals who can cheat their death and maybe live forever.

While human’s strength and fertility are affected by their ages, but lobsters are not so. Researchers found out that all lobsters cannot be weaken by old age, instead they grow bigger and stronger as they age. Older lobsters are even more fertile than the younger ones.

The oldest lobster ever found was estimated to be 140 years old from off the coast of Newfoundland. This implies that although the average life span of the lobsters are 30-50 years, if they find supportive condition they can live much longer than the average.

There are three common threats known to be able to kill them: captivity, disease, and inability to molt. Among those three, the inability to molt is the only internal cause of their death. The others are external threats.

Inability to molt means the inability for older lobster to grow by molting, as we know lobsters don’t stop growing bigger. The bigger they are, the more energy needed to molt their shell, and if they run out of energy the process will result in damaged shell.

The damaged shell is more prone to diseases and infections from the environment, and that may kill the lobsters. However, as long as they can repeat the process perfectly as they grow, maybe they can live forever. 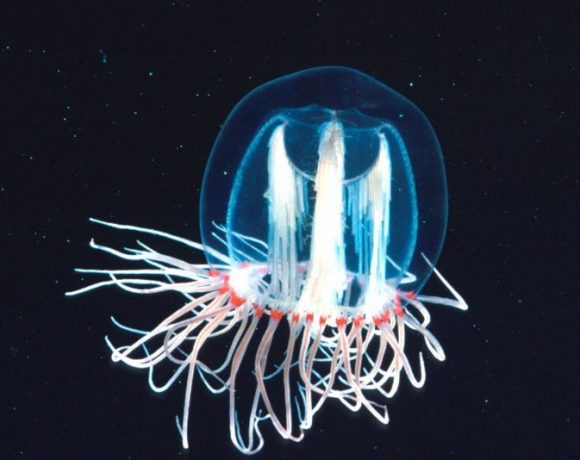 While you can say the age of a lobster by its size, the age of this creature is trickier to tell. The creature is Turritopsis doohmii, which is usually known as immortal jellyfish, and by its name you may get the idea that they can live forever.

This jellyfish has the ability to rebirth and reverse its aging process. This tiny variety of jellyfish can return to is polyp stage over a three days period whenever they are injured or get sick. By returning to the polyp stage, they are able to cure the disease and eliminate the injuries.

Looking on its incredible ability, researchers began to examine it to find a way that may be applied to human. But until nowadays, only Shin Kubota from Kyoto University who can manage to keep this species in the captivity.

Kubota is one researcher who tries to examine the rebirthing process of the jellyfish. He stated that in the span of two years, the colony he keeps in captivity are able to rebirth itself up to eleven times.

So, whenever they get deathly injury or incurable disease, they just simply turn back to their early stage and grow up naturally into adult stage. This process can be repeated indefinitely thus this jellyfish theoretically cannot die.

Immortal jellyfish can be found in Mediterranean Sea and around Japan. The diets of this jellyfish are other jellyfish species, but they are usually preyed by larger fishes.

Have you ever watched Dragon Ball? There is a character from the Planet Namec named Picollo who can regenerate itself whenever any part of his body is injured or detached. In this real world, such ability actually exists in small worms named planarian worms.

This worm regenerative ability is based on their highly proliferative adult stem cells. As the worm is known to reproduce both sexually and asexually, the asexual individuals reproduce by splitting itself into two. The stem cells help this process to grow another worm from the separated part.

In addition, if the worm ever hurt itself, it can detach the part where it hurts and replace it with healthier part. This worm can also replace aging cells by itself, making it can cheat death in two different ways.

However, the lifespan of this animal is the shortest among other animals listed. This animal may survive only until 15 years long.

Also known as water bear, this near microscopic animal is the toughest animal ever on earth. The title of the toughest is not a bluff because this animal has been proven to be able to survive in any of the most extreme condition on earth, making it unkillable.

There are over 1000 species of tardigrade and all of them have the ability to be called the toughest. They can range between 0.05 to 1.2 millimeter but usually they don’t grow bigger than 1 millimeter. They can be found anywhere on earth and prefer to live in sediment at the bottom of a lake.

The incredible thing is, in a study published online July 14, 2017, in the journal Scientific Reports, researchers stated that this animal may survive even after humanity is wiped out. Even after astronomical events like meteor impact or even supernova blast.

“To our surprise, we found that although nearby supernovas or large asteroid impacts would be catastrophic for people, tardigrades could be unaffected,” David Sloan, co-author of the new study and researcher at Oxford.

This animal can reproduce by sexual and asexual reproduction process. The female tardigrade will lay eggs, and whether the male fertilize them, the eggs will keep developing. This make the chance of wiping out this animal is smaller than wiping out humanity.

Can Lobster Feel The Pain Of Being Boiled Alive?