You are here: Home / The Species / Top 7 Amazing Glow in The Dark Mushroom – With Photo and Video

You’re not tripping — these mushrooms really do glow in the night . There are about 100,000 species of fungi, but only about 80 of them bioluminescent or glow in the dark

They produce light through chemical reaction . a compound generically known as luciferin is oxidised in the presence of an enzyme, luciferase, which produces light

Unlike other bioluminescent organisms, fungi emit a constant light, Some has speculated that they glow possibly to attract insects (beetles, flies, wasps, and ants like,). 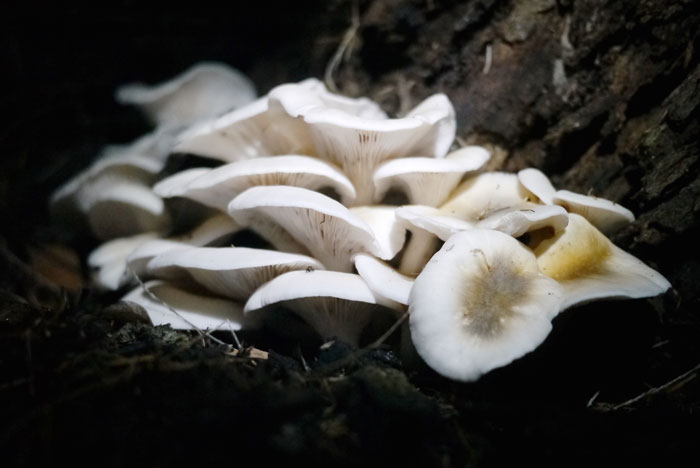 This oyster looking glowing mushroom is actually quite common throughout southern Australia. They are poisonous so don’t eat it ( Handling still ok )

The mushrooms often grew along the base of eucalypts, banksias and casuarinas. most often found on dead or diseased wood

Ghost mushrooms are both parasitic, feeding off living tree tissue, and saprotrophic, meaning they eat dead things, in this case rotting wood.

They were visible during the main fungi season of autumn to winter.

PS : They are poisonous so don’t eat it ( Handling still ok ) 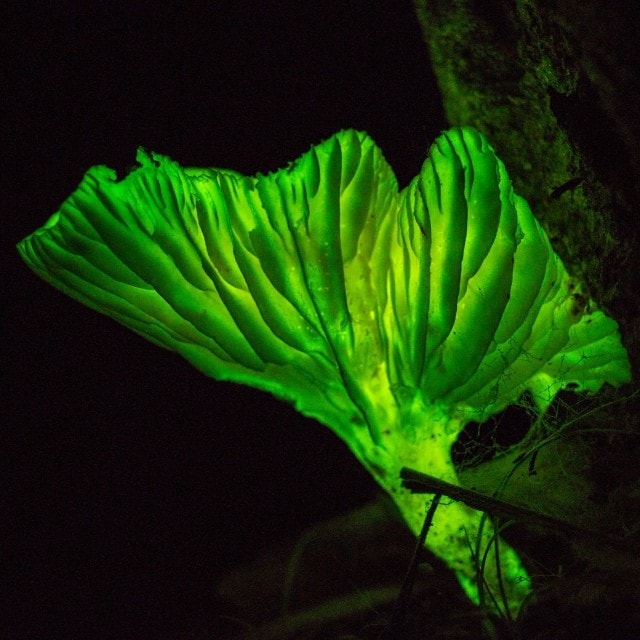 A Rare, bioluminescent mushroom that hasn’t seen seen since 1840 now has been rediscovered In the lush forests of Brazil on 2005. it lost for 165 years!

In nature, Panellus stipticus is found growing on logs and is shaped somewhat like a small leathery oyster mushroom.

This mushroom found in a variety of habitats all over the world. Those in North America have been found to be luminescent while those on other continents are non-luminescent

The light of P. stipticus is a greenish white color and emanates from the gills, cap, and mycelium

The cultures are sold as a novelty only and do not produce edible or internally medicinal mushrooms. There is little information regarding the toxicity of this mushroom when eaten but it was reportedly used at one time externally to staunch bleeding.

It has also been written that people in Scandinavia used to use the mushrooms to find their way in dark woods.

Modern research has probed the potential of P. stipticus as a tool in bioremediation, because of its ability to detoxify various environmental pollutants 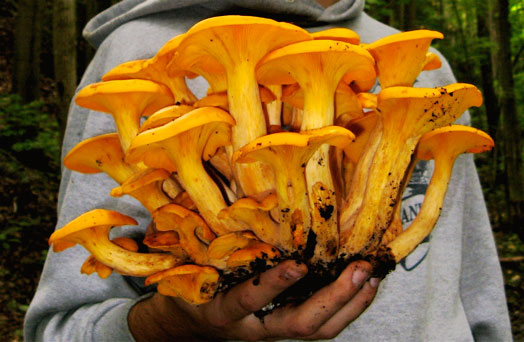 It is a large orange mushroom that is often found in clumps on decaying stumps, buried roots or at the base of hardwood trees in eastern North America.

When viewed in the dark, the mushroom’s orange gills emit an eerie bio-luminescent green glow

This mushroom is very poisonous, While eating this mushroom will not kill you, it may cause cramps, vomiting, and diarrhea when eaten raw or cooked

However, chanterelles rarely grow in dense clusters, and feature false gills, while the Jack O’Lantern is usually clustered and features true gills

The mushroom was discovered in a very limited area of the Atlantic rain forest of São Paulo, Brazil and is known to exist only at this location. It grows on decomposing twigs, rarely on dead leaves or undergrowth,

These mushrooms are tiny with each cap measuring less than 8 millimeters in diameter and their stems have a jelly-like texture. The species’ name was inspired by Mozart’s Requiem.

The oldest known glowing fungi, identified in the 1800s in Japan’s Bonin Islands

Mycena chlorophos are found in forests, where they grow in groups on woody debris such as fallen twigs, branches, and bark.

This bioluminescent mushroom is found in subtropical Asia, Australia, and Brazil. The caps and stems emit a glowing green light in the dark.

They glow brightest when they are about a day old 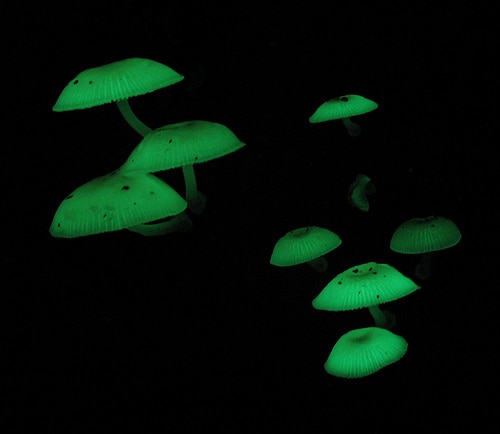 Honey mushroom can still be found throughout most of the world: Asia, North America and Europe

Armillaria mellea mushroom are considered good edibles, although some individuals have reported “allergic” reactions that result in stomach upsets. The mushrooms have a taste that has been described as slightly sweet and nutty, with a texture ranging from chewy to crunchy, depending on the method of preparation

This parasitic fungus can do immense damage to forests; it attacks  both coniferous and broad-leaf trees. By the time the fruitbodies are in evidence, the damage internally is usually so great that the tree is doomed.