Once working as a meteorologist, Christian Moullec must have been familiar with the cloud floating above. While he used to look up to see the cloud, now he decides to come closer to the floating cotton candy in the atmosphere.

Using his ultralight aviation, or some call it as microlight, he soars up to the sky. Often accompanied by his wife, his purpose is not to touch the cloud, his purpose is much more noble than fulfilling one childhood dream.

Rather than doing what he dreamed of as a child, his flight is a dedication to wildlife. He is flying to help migrating birds doing their journey safely. This is not a single flight story, but Moullec is doing it in almost daily basis.

Flying With His Children

The story of the French Birdman, that’s how people in his country call him, started back in 1995. In that year, Moullec first found out that lesser white-fronted geese were struggling with their migration. Although the route was ‘only’ from Germany to Sweden, he found that this struggle may lead to greater risks to the species.

Moullec thought that one reason why those geese were struggling was their migration route. “In 1995 I wanted to reintroduce lesser white-fronted geese into the wild in Lapland north of Sweden,” he said as quoted from National Geographic.

“At the beginning it was very difficult for me. The birds didn’t want to follow me,” said the French Birdman. Finding that his effort to just fly alongside the geese was unsuccessful, he tried another method by hand rearing the geese from birth and live with them.

He believed that by using the method called imprinting, the geese could regard him as their ‘mother’. Thus, he could make the geese to follow him everywhere he went, even when he was on the microlight guiding them to the safe point.

He said that this experience of guiding the geese he nurtured since birth to migrate was so touching. He said that letting go of his ‘children’ was hard, but he should let those geese follow their natural instinct. “I cry every day when I fly with my birds,” he said.

In the beginning he was only following the footsteps of Bill Lishman, from the movie Fly Away Home, and Austrian zoologist Konrad Lorenz. But after his experience of having the very first of many following flights, Moullec never regretted his decision to be fully committed to what he does today.

Feeling pleased to have been able to help the geese, Moullec decided to continue his work in guiding migrating birds. Since the beginning of his life as French Birdman, he has witnessed many cranes and geese like brent, barnacle, red-breasted, and graylag species.

While he was alone with his ‘children’ when taking the first flight, his wife started to show some support to his effort by accompanying him in the flights. Today, he and his wife have taken numerous flights and saved the lives of many more birds.

Moullec said that flying with the bird have given him the happiness he had never felt before. “It is an overwhelming spiritual experience. The most beautiful thing is to fly in the heavens with the angels that are the birds,” he said.

“My favorite was a big flight with 33 lesser white-fronted geese, from northern Sweden to southwestern Germany. My wife was on board with me and she was five months pregnant and expecting our first son. The trip lasted 5 weeks,” Moullec told National Geographic. 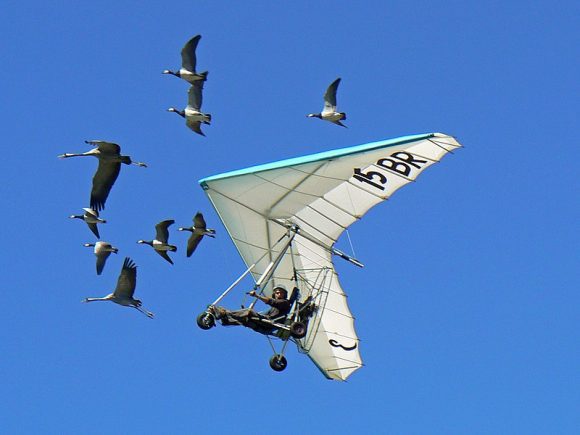 His strategy in conserving migrating birds is now a widely known story all around the world. “With my wife and some biologist friends, we hope to continue to make other migrations for the success of the reintroduction project of lesser white-fronted geese in the wild,” he said.

Nowadays, since his name has widely known by many people all around the world, many people are wondering about what it feels like being up above with the bird. Knowing that, Moullec saw it as a good opportunity to expand his conservation strategy.

Moullec wants to tell a message to the world about vulnerable birds’ conservation. “This is an opportunity for me to testify about the disappearance of migratory birds in Europe, because of the use of chemicals in agriculture,” he said.

Having a spare seat while his wife is not flying with him, he decides to take some tourist up with him to guide the migrating birds. Now, during bird migrating season from March to November, he opens the chance for tourists to fly with him.

By doing this, he opens up the opportunity for people from all around the world, especially Europeans to have this once in a lifetime experience. “The flight inspires in me a huge respect for nature and I can communicate this respect to my passengers. There are also people with disabilities and those who want to experience a great time in the sky with the birds before leaving this world,” he said.

According to Moullec, the view from above is priceless. So, he often takes pictures and video while flying with the birds. “We fly over beautiful valleys, near the largest ancient volcano in Europe. When there are clouds, we fly above them. I also like taking pictures of these flights,” he said.

Conveying the message of how vulnerable the migrating birds are, he also wants to share the beauty that he captured from above. Thus, people will not only get his message from written and oral news, but also from the silent yet appealing pictures.

He hopes that by telling and showing the message about migrating birds this way, people will stop their harmful activities which might bring harm to the birds. “A third of wild birds have disappeared from Europe during the last 30 years, because of man. It’s a disaster,” said Moullec.