You are here: Home / Eureka Green / We’ll Depend More on Drones to Reforest Our Planet Because It’s Faster

There are many negative impacts of deforestation. Aside of making human-caused climate change worse, there will be loss of habitat and eventually loss of biodiversity.

Humanity depends on dense forests in order to keep on living here on Earth. Forests contribute a lot in capturing carbon, and if we have less of them, there will be more and more carbon around, and that’s not good.

According to the International Panel on Climate Change, we’ve got only about 10 years or else there will be the most catastrophic effects of global warming and humanity will suffer.

There was 43 billion tons of CO2 released by humans in 2019. Offsetting that requires a hecking lot of trees. Simply put, we know that we need to reforest our planet as soon as possible, but us humans have limitations.

Now, we usually associate drones with videos/photos, delivery, and also disinfecting amidst the pandemic. Well, we can also use them for planting trees.

Flash Forest from Canada is one of the examples I’m going to showcase here. It’s a reforestation company that uses drone technology to reforest areas, especially the ones affected by wildfires, at a rapid pace.

Planting a lot of trees is not an easy task, and it’s kind of inefficient when humans do it. Drones accelerate the pace of reforestation by at least 10 times. Two people could direct 10 of these drones.

The drones used here aren’t the same as the ones we usually see. They’re heavy-lift, equipped with a pneumatic firing device that allows them to insert planting pods into the soil at an ideal depth.

Pre-germinated seeds mean that they’re already sprouted before being inserted into the ground. That gives us a higher chance of successful growth pattern and robust rooting system.

Once the team has done the planting, they will follow up the process with a spraying drone to provide nitrogen and other nutrients to the seedlings. They will also do an additional mapping in order to keep an eye on the plants’ growth.

And not just planting seeds, Flash Forest also plants a variety of species that are native to each location to maximize biodiversity. Their priority is to plant permanent, diverse forests.

With drones and their pilots, the company can plant about a thousand to two thousand trees per hectare.

Flash Forest works with corporation, NGOs, forestry companies, universities, and government agencies to maximize their efforts and reach more areas. They’re currently refining their technology across Canada, but they’re planning to expand internationally and bring their tech to six continents.

By 2028, the Canadian company wants to plant over a billion trees. Their short-term planning includes bringing the cost down to 55¢ per tree, about a quarter of the cost of most tree restoration efforts.

All the way to Southeast Asia, in the south of Yangon, Myanmar, drones have planted mangrove saplings which have all successfully grown. The company behind this is Biocarbon Engineering, a green startup cofounded by Irina Fedorenko (we’ve talked about her in this article).

“We now have a case confirmed of what species we can plant and in what conditions. We are now ready to scale up our planting and replicate this success,” she said.

Biocarbon Engineering have also planted trees and grasses at abandoned mines in Australia and on sites in other parts of the world. In Myanmar they worked with a nonprofit called Worldview International Foundation. The NGO has worked with villagers to plant trees by hand.

Villagers and the NGO have planted more than six million trees. While having reached that achievement, Worldview International Foundation realizes that humans can’t efficiently cover the amount of land that could potentially be restored.

In this case, some seeds don’t fit inside the pods, so human labor is still needed. Additionally, people living nearby also need a reason the keep the trees growing and standing.

“The project in Myanmar is all about community development and enabling people to care for trees, providing them with jobs, and making environmental restoration in a way that it’s profitable for people. The forest didn’t vanish by itself—the forest was cut down by local people,” said Fedorenko. 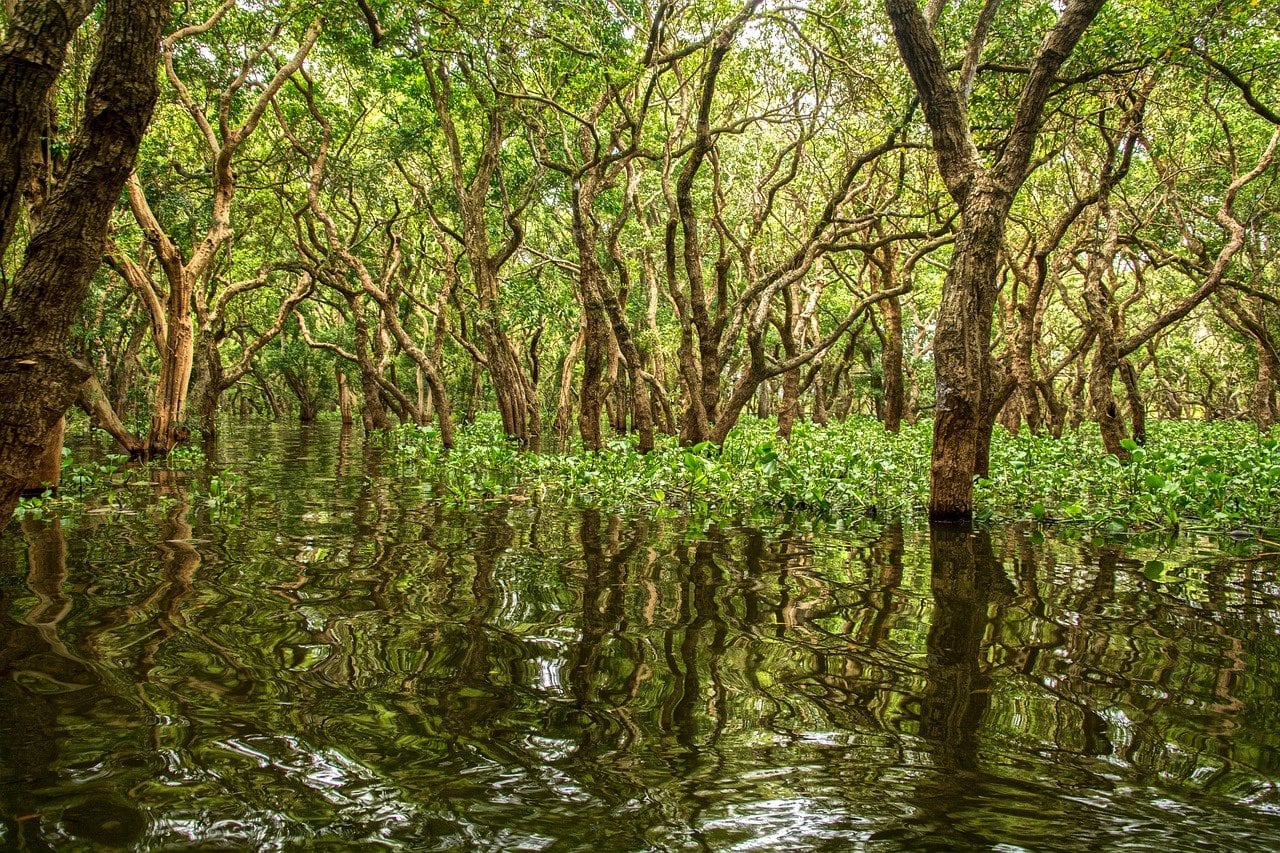 Mangrove forests play a big role in the environment; the trees can store more carbon than trees on land. According to a 2018 study, mangrove deforestation is responsible for 24 million tons of CO2 emissions each year. But we’ve lost about half of the world of these forests.

These forests provide a barrier in storms. Without it, the effect is destructive. In 2008, a cyclone hit Myanmar, killing more than a hundred thousand people and leaving the country without many trees left. Some mangrove trees were cut down to make way for aquaculture while the wood was used to make charcoal.

Aside of bringing back mangrove forests (and other forests), Biocarbon Engineering also wants to help people in the community so that they can get higher-paid, more technical jobs related to reforestation, like drone pilots.

Additionally, the trees can also earn revenue through carbon credits. Worldview International Foundation’s work has been validated so that it can sell carbon offsets to companies. That money goes back to the community and keeps the work going.

Biocarbon Engineering has talked with brands that are willing to sponsor tree planting. The mechanism is when a consumer makes a purchase, a tree is planted. The drones could share data about specific trees with the consumers.

Fedorenko said, “We can literally see every single tree and the leaves on the tree if we need to. It opens up this new market for people to see the connection with trees and to say, ‘Wow, this is my tree. I planted that.’”

Maybe after this we’ll see a lot more pilot drones and their tree-planting flying machines. What do you think?

4 Ways To Power Your Off Grid Home with Green Energy