You are here: Home / Hello Earth / How Illegal Sand Mining Becomes The Matter Of Life And Death

Along with development of infrastructures and manufacturing all around the world, the consumption of building materials is increasing day by day. Since sand is an important material and used in almost any activity in building, sand consumption is among the highest.

The question is, where did the world get sufficient supply of sand? The answer is from mining it, mainly through an open pit but in some part of the world, the sand is mined from beaches and river beds. The problem is, the mining activity is not harmless to the nature.

Sand mining in dunes may lead to erosion and changes in river and beach ecosystem which then progresses into flooding and further destruction. That’s why to prevent the destruction of nature, this kind of activity is usually regulated with strict control.

However, because the control is particularly strict, while the world constantly need a lot of sand every day, illegal mining comes up to the surface. Illegal sand mining is the worst possibility ever in this case, because those illegal miners do not care about protecting and preserving the nature.

Not only that, the number of illegal sand mines all around the world is never going to be clear, for many reasons. Here in this article we are going to talk about those reasons and mostly the bad parts of illegal sand mining. Spoiler alert, in some places it is the matter of life and death.

Albeit being one of the most destructive activity to the nature, up until now the world has not paid enough attention to it. In common medias, we rarely find any deep investigation exploring the destruction of nature caused illegal sand mining.

There are at least two reasons to explain it, first is because illegal sand mining is usually done in remote area where they can hide their smell away from public. In this case, usually the activity is relatively small so the miners can just move to other spots when outsiders find it out.

The process is kind of similar to guerilla movement, rather than building a huge mine in one place those miners choose to build smaller ones but effective in many spots. Seems insignificant at first, but cumulatively it brings huge threat to the area.

The second reason is because money talks. Yes, most of those illegal mines are also illegally protected by officials who has been bribed by the miners. This way, the miners should worry not about being shut down by the officials. We can say it is a practice of corruption and bribery.

Such practice of bribery and corruption is commonly done in developing countries, like the countries in South East Asia and Africa. This way, even activists cannot do much to protect the nature from further harms, and often they have to face death sentences just by protesting the practice.

The Story Of Salim Kancil

We are not exaggerating even a little bit the story when we said that sand mining is the matter of life and death in developing countries. We will tell you one of many real stories about it and hope that this story will open up your eyes.

This story happened in Lumajang, East Java, back in September 2015, involving a man named Salim “Kancil”. Salim and his fellow villagers were the most impacted ones by illegal sand mining activity in Watu Pecak Beach, near their village.

Those people found out that the mining activity had left holes as wide as 5 meters in diameter everywhere on the beach and destroyed the nature in the area. That was why they staged a rally to protest the activity.

Lumajang’s illegal mining activity is actually protected by powerful undercover force in local government. The protest successfully delayed the transporting and quarrying of sand from the mining site to the city, however those protesters missed the roots of this destruction.

The protest itself didn’t get much attention, but secretly some people in charge were feeling threatened by it. In case to prevent the news became viral and spread all over the country, those people in charge felt that the protesters should be silenced, forever.

Three days after the protest, a 52 years old Salim as the coordinator of the protest, and his fellow protester Tosan, were forcefully dragged from their homes by a group of people. Those two people were literally dragged by motorcycles to village hall.

There, they were beaten by that group of people in front of the crowd, the other protesters or we can say the whole other villagers. Didn’t stop there, after being beaten up, Salim and Tosan were killed in inhumane way before many witnesses.

The body then again dragged around the village by those people as a warning for the villagers to never ever continue their protest. We cannot explain the detail of this violence much further since it would be too gruesome for some readers.

Ironically, although the protest didn’t gain enough attention from outer world, the news of this inhumane activists’ slaughter spread all over the country. Instead of covering the story, this incident opened up the whole chronicle.

And yes, after being investigated by the police, the illegal mining activity was protected by powerful people behind the curtain. At least 36 people were caught by the police under suspicion of the murder of Salim and Tosan, including the village chief and other local officials.

Moral Of This Story 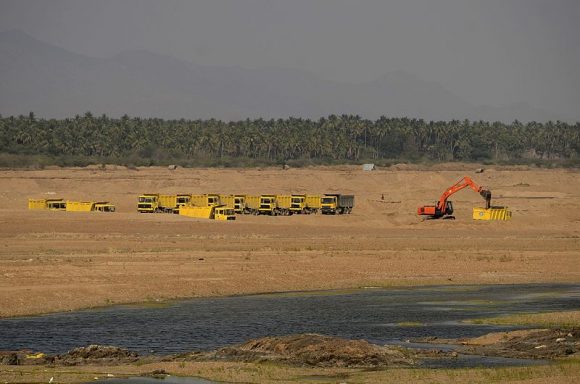 No, there is no moral in this story, just a short review about how in some parts of the world people are still lacking of morality. Money is the only thing they are care about, more than nature and human’s life. No wonder nature destruction is everywhere.

As stated before, this kind of inhumanity doesn’t only occur in Indonesia, but in other developing countries too. Like in India, another 52 years old farmer was shot in his bedroom for campaigning against local government in Raipur Khadar.

“Elected representatives, big landowners or those with great clout in the local community are inevitably involved in sand mining. There is also usually widespread fear of sand miners and protesting against mining leads to disastrous and sometimes fatal consequences,” said Sibi Arasu, an Indian investigative journalist who inspected the case.

Although not getting enough attention, sand is a big business for some who realize it. Indeed, sand happens to be included in 80% of manufacturing and buildings in the world, making it a multi-billion industry.

So, what should we do to prevent further damage to the nature caused by sand mining? Maybe science will help raise the awareness, if scientists care enough to do it. “The community researching sand mining is still very small,” said Jiango Liu, a professor of fisheries and wildlife at Michigan State University.