You are here: Home / The Species / 10 Astonishing Blue Flowers For Your Garden

Maybe sometimes you wonder, “Are there any real blue flowers?” or “Are those blue flowers I find in the internet really blue or artificial?”. Here is the answer, yes blue flowers exist and they are naturally blue-colored. In this article I present you a list of 10 astonishing blue flowers growing naturally on this mother earth that you can plant in your garden.

Do you often hear “Roses are red, violets are blue” kind of poem? Well, that poem may inform you for the first species of blue flower. This native eastern North American flower is commonly known as blue violet, wood violet, hooded violet, or the lesbian flower. Why the lesbian flower? Because in the early 1900s, lesbian women would give violets to the women they are wooing.

This plant is the state flower of several states in United State such as Illinois, Rhode Island, New Jersey, and Wisconsin.  Blue Violet is not only a decorative flower to beautify your garden, this flower may also serve as herbal medicine. The Cherokee used it to treat colds and headache, while Rafinesque in his Medical Flora, a Manual of the Medical Botany of the United States of North America (1828 – 1830) wrote that this flora was usually used to treat coughs, sore throats, and constipation.

Scilla Sibirica, which is commonly known as siberian squill or wood squill, usually appears in springtime. This flower is native to southwestern part of Rusia and Turkey, but despite its name it is not native to the Siberia. This flower is usually planted by seed and spread quickly once they are grown.

The unique part of this flower is not only the flower petals whose color is blue, but also the pollen is dark blue. For your information, this flower is easy to plant because of its nature. But as an early caution, The Minnesota Wildflowers site informed that this flower may invade your garden and lawn since this plant is difficult to get rid of and its root often re-sprout.

Commonly known as Black and blue sage or Hummingbird sage, this flora is native to some South American countries such as Brazil, Paraguay, Uruguay, and Argentina. This plant may grow up to 1,5 meters tall and usually blooms during summertime until the winter is coming.

This flower known has many shades of blue and blueish color of flowers, depend on its species. Some of those are the Argentine Skies which known as its pale blue shade, the Black and Blue with its very dark violet blue, and Blue Ensign that blooms large blue flowers.

This flower may have the largest blue-colored flower than the others. This large light blue flower is also the unique one in its genus because most of the plants in Mecoponis genus live shorter than two years, while this flower is perennial or may live longer than two years. Meconopsis Betonicifolia is commonly known as Himalayan blue poppy. This flower was first discovered in 1912 by Lieutenant Colonel Frederick Marshman Bailey whose hobby was photography, butterfly collecting, and trophy hunting.

Usually known as Spring gentian, this flower indeed only blooms for a short period of time. This flower usually only blooms at late spring to early summer and hides its beauty for the rest of the year. Spring gentian is a small flower with 1-2 centimeters diameter, but despite its size, it is the most widespread gentians.

This flower is very attractive not only to humans but also to butterflies, bees, and ants. Those little insects responsible for its reproduction cycle with the butterflies and bees help its pollination stage and later the ants are spreading its seeds.

The next blue flower that you can plant to beautify your garden is the cornflower. Also known as bachelor’s button, this is an annual flowering plant. What makes this flower special is because once it was known as an endangered species in its native habitat, Europe. However, it is now classified as an endangered plant only in United Kingdom because the rest of the world helped its survival with an act of spreading it all over the globe.

This flower can now be found in many parts of the world including America and Australia. So, if you plant it in your garden, you may also take part of the act of saving this flower from extinction further.

This blue starry flower usually blooms in late June. This one is considered as one of the most reliable flower among others since they usually always bloom from year to year. They are said to be easy to plant, since they can be planted in whether moist or drier soil. The soil condition doesn’t affect its flowering but rather only the height of the plant. In addition, this plant is poisonous to slugs and snail, so you don’t have to worry about those pests.

This flower is usually grown from seeds and said to be better grown in a shady area. The sunnier the place, the paler its flowers will look. However, almost nothing can affect its flowering period and it will stubbornly bloom in any condition. So, who doesn’t love a flower that will always bloom every year?

The Lily of the Nile is how this flower usually called. This one is a popular plant all over the world, especially in Mediterranean area. Its flowers are light blue and usually greet you in early spring. This plant is also a tough one because it can survive in sun and heat and also doesn’t need often watering. However, in some areas this plant is considered as weed and planting is discouraged.

This flower is also known as grape hyacinth because of the shape of its flowers is rather urn-shaped. Grape hyacinth is usually grown from a bulb and easily spread, even sometimes considered as invasive.

This flower prefers well drained sandy soil and require little feeding and watering. Thus, planting this plant is an easy task. This flower is usually one of the earliest blooms in the spring. 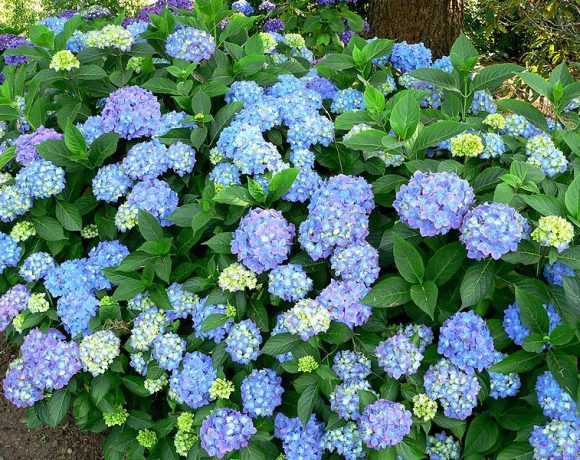 The Hydrangea macrophylla flower is native to Japan and usually known as Hortensia. The natural color of this flower is not blue, instead its color depends on the acidity of the soil and the aluminum ion presence in the soil. So, you may plant a pink colored hydrangea stem and get the blue colored one blooms in your garden.

In its native country, Japan, this flower is considered as a flower of good deed and has different meanings depends on its color. White hydrangea is told to be the symbol of tolerance, while the pink one represents feminine vitality. This flower is also usually used as a wedding ornament to symbolize a wish for happy and united family.

How Butterfly Can Maintain Their Beauty In This Cruel World