You are here: Home / The Species / Top 4 Most Fascinating Amphibian Species On This PlaNEWT

Amphibian is one of the most diverse groups of animal species on the planet. This is mainly due to them living in various habitats in both land and water.

The terrestrial-aquatic characteristic has thus given rise to exciting creatures that have changed and adapted their biology to fit into their habitats.

The biodiversity of amphibians has also put them at significant risk of being endangered and extinct. Thankfully, animal activists have stepped in to assist amphibians in reclaiming their native territory and surviving.

Many are now on protected species lists to illegalize and prevent humans from harming them. To better safeguard amphibians, you can learn more about them and appreciate what they do for natural ecosystems.

Here are the top four most fascinating amphibian species:

This amphibian is named after the Aztec god of fire and lightning and was found in Lake Xochimilco near Mexico City. Although classified as a critically endangered species, conservationists and exotic pet owners are coming to their rescue. Axolotls can be sold as pets and bred in captivity, allowing them to thrive in a supported environment.

They can then be reintroduced back into the wild in some circumstances. This cute salamander is unique because it differs from other salamander species. A common trait of amphibians is to undergo a morphing phase, starting from larvae and eventually to mature into adulthood, where they develop lungs.

This is so that they can breathe air and live outside of water. The axolotl, however, remains in a permanently juvenile state after its larva stage and never leaves the water. This is partly because they never develop the primitive lungs necessary to breathe air. Due to this, they retain their external long frilly gills that give them an adorable childlike appearance.

Depending on the color of the axolotl, the gills can appear reddish, and they can develop black spots on their faces as they age. The combination of reddish gills and black spots that look like freckles adds to their cute appearance. 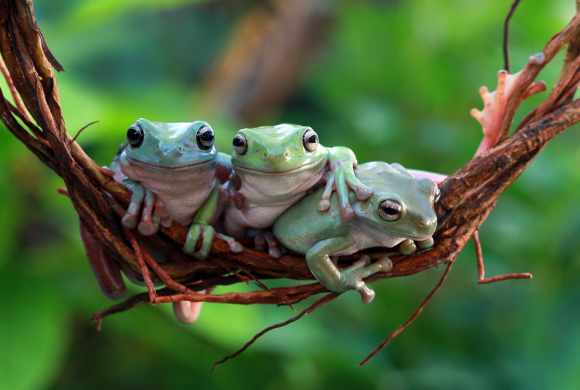 This fascinating species of tree frog is found in Central and South American rainforests. Due to living in this habitat, it belongs to a rich and essential biodiverse ecosystem. It spends most of its life in the trees, sleeping through the day due to having nocturnal attributes. Additionally, this frog is so famous its likeness has been used as the default illustration of frogs in children’s entertainment.

The red-eyed tree frog is most notable for its distinctly large bright red eyes and vibrant lime green skin. This skin color allows the frog to camouflage in its green foliage by pressing its body flat onto leaves. Furthermore, they also have red sticky footpads that make them skillful climbers that can easily attach to leaves, plants, and stems.

What makes this frog particularly remarkable is its scare tactic to evade predators. Most frogs that are brightly colored have potent toxins embedded in their skin, making them poisonous. However, the Red-Eyed Tree Frog isn’t toxic but relies on its large eyes to create a bluffing effect. This tree frog widens its eyes to stun and paralyze predators, which gives them a chance to escape. 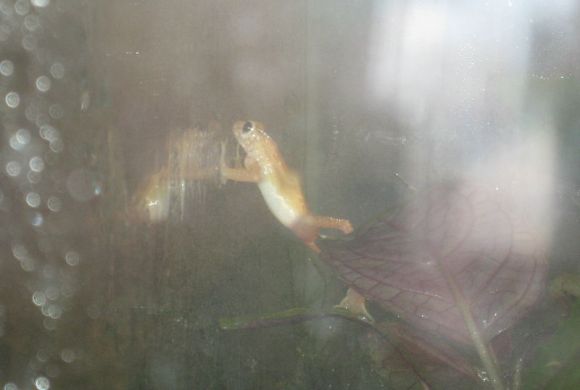 Over the past two decades, the Kihansi Spray Toad has been a unique amphibian to animal conservationists. Their efforts through captive breeding programs in the US have helped this once extinct toad come back into existence. Their numbers have gradually increased over the years and, in the future, can obtain a complete revival of their wild habitat.

This toad has the word ‘spray’ in its name because it’s located by the Kihansi Falls in eastern Tanzania. It lives near the waterfall, and specifically, an area is known as a spray zone to keep them wet and moist. What makes this toad unique is its specialization and adapted to offspring survival in the sprays of the waterfalls.

Most amphibians are oviparous, meaning they give birth to eggs which then hatch into tadpoles. Some toads, such as the Kihansi Spray Toad, are ovoviviparous, where they store the eggs inside their bodies. Keeping the eggs inside their bellies until their hatchlings are fully formed protects them from being washed away by the waterfall spray. 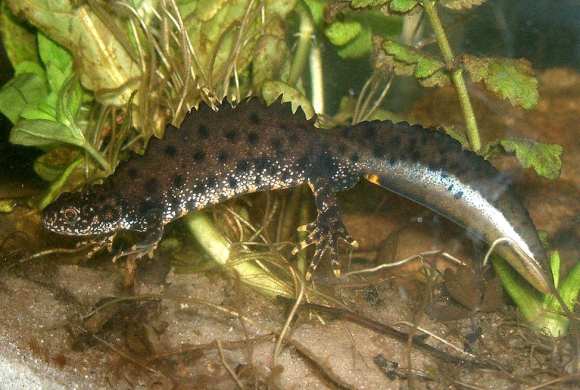 This newt species is also known as a ‘warty newt’ due to their bumpy and wavy crested bodies. They are found in clear ponds, woodlands, and grasslands across Great Britain and Europe. The ‘great’ portion in their name denotes how they’re the largest newts in Europe according to size. Females are more significant than males and can grow up to 17cm in length.

The Great Crested Newt is fascinating how they can be identified individually. Each of these newts has a distinct black spot pattern on their bellies that’s unique to them. It works in the same way as humans having one-of-a-kind fingerprints. These markings make it easier for environmentalists to keep track of each newt within a single area.

What’s more, is how this breed of newt has a spectacular courtship ritual to get attention from females. When the weather gets warmer, these male newts stand on their front legs and waft their tails in the air to release pheromones. This display has been described as an endearing dance that has fascinated onlookers lucky enough to witness it. 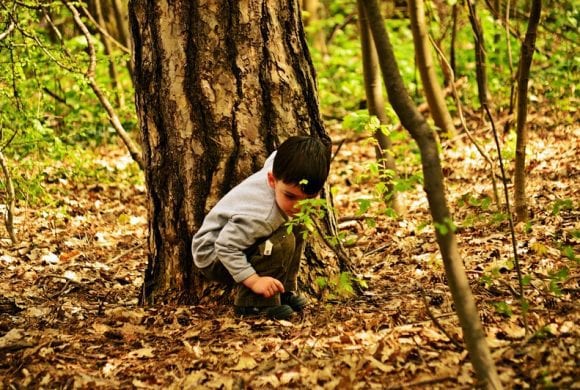 Amphibians are some of the unique classes of species in nature. Their ability to change and adjust to the water and air environments has allowed them to live in diverse habitats. This has then evolved into their well-known quirks and notable appearances and behaviors.

As fascinating as amphibians are, they have been susceptible to endangerment via habitat loss and human activity. Take for example axolotl habitat in Mexico, water pollution almost destroyed their only home on this planet.

We need to be more aware of their presence in this nature. Luckily, these species have continued to thrive because of efforts to restore them. By admiring and recognizing their importance in nature, you can help preserve them for future generations to marvel at.

Biologists Found The Hugest Tadpole You Will Ever See!

These Animals Have Unique And Strange Defense Mechanisms