You are here: Home / Eureka Green / Can Floating Farm Be The Future For Our Food Production

As the number of people living on this planet keeps growing, we will eventually find ourselves in needs of sufficient food supply. The thing is, the land area on this planet is limited, moreover the area that can be used as farmlands.

Only one third of this planet is land area, and smaller amount of it is capable of being used as farmlands. The area would shrink further if we consider the sustainability of our farmlands since we cannot sacrifice our forests just to plant our food sources.

On the other hand, two-third of this planet is covered in water. But most of the water surface is saltwater or we usually call it as the ocean. Looking on this condition, a British design graduate came up with the idea to plant on the ocean using floating farm.

Here in this article, we are going to look at the concept that might save us, and the planet eventually, in the future. 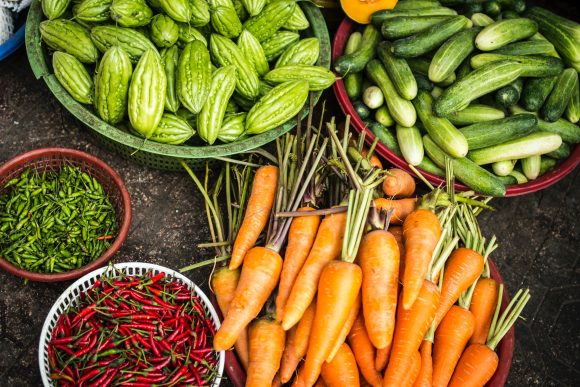 Leilah Clarke, design graduate of University of Sussex, is the person we should give thank to if this floating farm breakthrough eventually becomes real. She might one day become the woman who save the world with his invention.

Her idea came from the prediction of scientists that big part of this planet would eventually drown when the sea level rises. In addition to that, as we are slowly drowning by the effect of global warming, the number of populations keeps rising.

United Nation predicted that in 2100, there will be 50% more human inhabiting this planet. Not only it will pressure us on inhabitable land, but it will also pressure us on food supply. While we will have less and less land to cultivate, we will face more demands for foods.

She then thought about the ocean, because this is the part of this world that’s predicted to grow. If only we can utilize the ‘growing’ ocean surface because of increasing sea level and use it as our new farmland, then we might be able to fulfill the demands.

“I want to tackle two birds with one stone. The population is going to need more food to support them and somewhere else to grow our food since much farmland isn’t going to be available anymore,” she told Reuters.

The idea to utilize the ocean as farmland itself is actually not a new thing. However, Clarke developed the idea to make floating farm doable for everyone who live near the shore. The superiority in her design is to make the floating farm self-watering.

Yes, the design she made actually allows the farm to self-water even though it is located in the middle of the ocean far away from fresh water source. The key is in natural desalination process that has already happened since the birth of this planet.

Every day, the sun heats up ocean surface and evaporates water into the air creating clouds. This evaporation process is natural desalination, because during this process, saltwater in the ocean leaves out the salt content and only the pure fresh water is being evaporated.

The floating farm prototype that Clarke creates is just small pods with clear dome on top. Utilizing this natural desalination process, the pods will trap water vapor from below it, and condensate it into fresh water that the plants can use.

“The basic idea is it sits in the water and water comes up inside the plant area. Then the condensation will rise, land on the domes outside, and the plants are fed the pure water,” Clarke explained. This way, as long as there is saltwater below, the plants will get sufficient amount of water every day.

Clarke has proved that his prototype works very well by planting spinach and chard. She also said that radishes are going to grow very well too in her prototype.

With abundant sunlight and water in the ocean, the plants will also grow more quickly even on large scale. Her inspiration for the design partly came from Nemo’s Garden Project in Italy which aims for underwater farming.

“I did three months of growth experiments quite early on because unlike the Nemos project which is obviously underneath water, mine is on the sea level,” she said.

She started the floating farm project small before testing the effectiveness in real ocean environment. She even used her bathtub, and eventually a large fish tank, to simulate the ocean environment. The latter is her most successful media.

“I had to check the differences in rates of condensation. I then did two months of wave testing using various methods from just being in my bathtub to being at the sea. I actually ended up making my own rig on a rocking chair with a large glass fish tank which was actually the best because I could record things most consistently,” she continued.

With the result of her study, now she is waiting for elicit commercial funding to make this floating farm project a success story and to make bigger domes that can be used to grow more plants.

In the future, floating farms might be the trend in agricultural world, and it will include farming livestock too. It has already happened in Netherlands, though. Located in Rotterdam’s active Merwehaven harbor, a floating farm is doing pretty well.

The floating farm doesn’t only grow vegetables, but also 35 Meuse Rhine Issel cows. “I see this as a substantial way to produce food close to consumers,” said Peter van Wingerden, a Dutch engineer and the founder of Beladon, the company behind the project.

To maintain the sustainability of the farm, the cows and the plants onboard are partaken in a big circular process. The cows are inhabiting the top floor of the farm, where the waste of the livestock can be harvested and processed into fertilizer for the plants below and land near the platform.

Downstairs, the cows are allowed to graze on the grass as much as they like. This process actually has shown positive result as the cows are said to produce delicious and rich milk about 750 liters in just one day. While on the other hand, the grass and the plants keep growing healthily.

“At first it sounds fantastical, expensive, and impractical. But I’ve come to appreciate this project as a brilliant engineering solution to a growing world crisis: producing food for almost 10 billion people by mid-century on a shrinking land base,” said Sarah Gardner, an agricultural policy researcher at Williams College in Williamstown, Massachusetts.