You are here: Home / The Species / Hold Your Tears When You Watch This Starving Polar Bear Video

Some people may say that climate change is not real. Some others say that even if it is real, it has no impact on the survivability of polar bears. But after you watch this footage, we assure you that none of those statements are true.

The video shows a frail polar bear walking around on an iceless land looking for food. The bear looked so weak while its eyes scanning around the area to find a little bit of food. It even looks for food in the drum while what it found is just a little bit of scrap.

This heartbreaking video was recorded by Sea Legacy, a conservation group who conducted an expedition at late summer in Baffin Island. “My entire Sea Legacy team was pushing through their tears and emotions while documenting this dying polar bear,” Paul Nicken wrote on his Instagram caption.

Several hours or days after the filming of this video, the bear probably met the end of its life. Paul said that this is what a slow painful death looks like. “This is what starvation looks like. The muscles atrophy. No energy. It’s a slow, painful death.”

Will This Happen To The Rest Of The Polar Bears?

There are about 25.000 polar bears left on earth, and scientists stated that the deadline for those bears to survive is only within the next 100 years. The sad truth is, maybe the rest of the polar bears are going to die the same way as the filmed bear, weak and starving.

The climate change affects polar bears both directly and indirectly. Directly, the rising temperature in the arctic area means that they have less ice on the sea. The sea ice is important for the hunting, resting, even breeding process of polar bears.

The result of the shirking of arctic ice can be seen from how the bear in the video seem like having no energy to move. He cannot swim far enough to find foods because there is no ice to rest on. And it means that it cannot find the foods it needs near and on the land.

Many scientists believe that by the year 2050, about 30% of current polar bear population would be gone. And the pace of the declining will continue to rise, until it reaches the 100 years deadline. After that, the species will go extinct forever.

After the last polar bear die, then the stability of arctic ecosystem will be unstable. This is because polar bear is the highest predator in the arctic food chain, and once it is gone, the lesser predators’ population would boom, in a short period before it will also go extinct because of lack of food supply.

However, we still have the chance to save them from extinction. “But there are solutions. We must reduce our carbon footprint, eat the right food, stop cutting down our forests, and begin putting the Earth—our home—first,” he wrote.

Paul, who filmed the starving polar bear received many questions from his followers relating to the video. Many of the followers asked why he and his team didn’t help the bear. “Of course, that crossed my mind,” he said as quoted from National Geographic.

“But it’s not like I walk around with a tranquilizer gun or 400 pounds of seal meat,” he continued. In addition, actually there is a rule in Canada that prohibit people to feed polar bears. So, although he was filming in tears, that’s the only thing he could do.

Polar Bear Is The Cue Of Climate Change

Scientists believe that polar bear is the “canary in the coal mine” of climate change. Any signs about climate change is told by nature via those white bears. The rate of polar bear declining shows us how much the climate has changed.

It means that the ice in arctic area is forming later and melting earlier. Although it may not seem like a big problem to us, but for the animals living in the area this condition is chaotic. A month of iceless period means a month-worth of food is gone.

And this will lead to starvation or malnutrition for the arctic animals that make them unable to do their activities. Again, this will bring risk to their health and eventually may lead them to the slow, painful, and torturing death.

It Is Not Only Polar Bears’ Matter 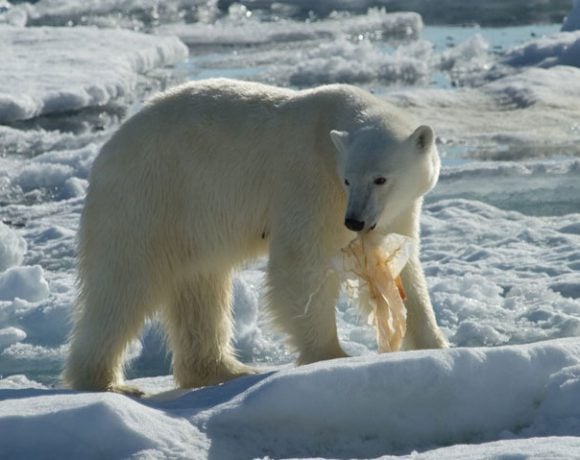 The declining of polar bear population on earth means that the climate has changed so far that it has become less and less supportive to the lives of those polar carnivores. Not only to the polar bears, but actually other arctic animals are also suffering from this condition.

Even us, who live farther than those arctic animals from the north pole of the earth, are actually under the threat. Polar bears are only the signs given by the nature about what actually happens that is invisible for naked eyes.

The climate of the earth has changed from its natural state because of our activities. Thus, before it is too late, we need to change to better lifestyle. Like what Paul Nicken said, reduce our carbon footprints, eat the right food, and stop destroying our forests.

This story is about a miserable polar bear, don’t let it also happen to us. Humans, as the most intelligent creature on earth, are responsible for the condition of this earth. Why must other creatures suffer from the climate change if it was caused by us?