You are here: Home / Eureka Green / Milk Protein That Can Turn into Biodegradable, Robust Plastic Foam

Human brains and science go well together, creating countless innovations that’ll help humanity in the future. We’re gonna take a look at a few of awesome findings today that’ll give us hope about the future.

One of the reasons why plastic is still widely used is because its capabilities, like being able to withstand heat aka thermoplastic.

But this new discovery from a research team in Sweden has just provided a new material that can potentially replace the petroleum-based ones.

This whey protein plastic foam can stand extreme heat better, which we can use as catalysts for cars, fuel filters or packaging foam. And not just that, this new material improves its mechanical performance after days of exposure to high temperatures.

The KTH Royal Institute of Technology researchers said that their discovery opens the door to utilizing protein-based foam materials. Maybe in the future, we can use them in tough environments like filtration, thermal insulation and fluid absorption.

Co-author Mikael Hedenqvist said, “This biodegradable, sustainable material can be a viable option for use in aggressive environments where fire resistance is important.”

So, aside of its ability to provide support for catalytic metals that operate at higher temperatures, there are other possibilities as well.

For example, sound and thermal insulation in places where higher temperatures may occur. Or, in places with aggressive environment that may potentially be dangerous. 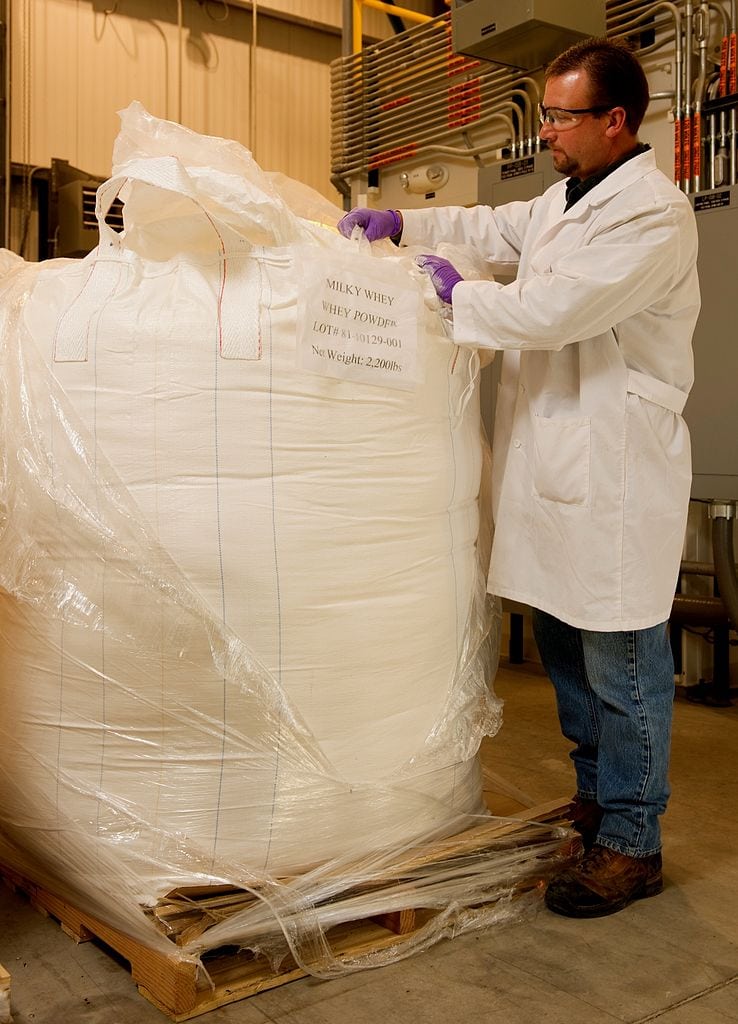 The basic building blocks of the material are protein nanofibrils hich are self-assembled from hydrolyzed whey proteins. Whey is a product from cheese processing that comes out under specific temperature and pH conditions.

During the tests, the foams showed better performance as they age. After one month of exposure to a temperature of 150C or 302F, the material became stiffer, tougher and stronger.

“This material only gets stronger with time. If we compare with petroleum-based, commercial foam materials made of polyethylene and polystyrene, they melt instantly and decompose under the same harsh conditions,” Hedenqvist said.

Since proteins are often water-soluble, making protein-based materials can be challenging. However, this whey foam became water resistant after the aging process. It polymerized the protein, creating new covalent bonds that stabilized the foams.

Moreover, the foam could resist aggressive substances like surfactants and reducing agents that normally decompose or dissolve proteins. Also, they can resist hot oil, which is rather on par, if not better, than the usual petroleum-based ones.

Eating plastic in the future?

We have growing concern over eating (micro)plastic, but this new discovery can actually make us put plastic into our digestive systems. At least in the future, maybe.

The key player here is the good ol’ E. coli, and the end product that may be consumable is vanillin.

For those of you who don’t know, vanillin is the primary component of extracted vanilla beans. The taste and smell of vanilla we know and love is from this substance.

Other than eliminating waste that boost circular economy, this finding can have positive impacts for synthetic biology.

I mean, we’ve got plastic problems right now. There are about 50 million tons of polyethylene terephthalate (PET) waste annually. Recycling is possible, but it usually leads to yet another plastic pollution.

We should applaud scientists from the University of Edinburgh for this discovery. They used lab engineered E.coli to transform a molecule derived from PET into into the high value compound vanillin through a series of chemical reactions.

The scientists showed how feasible this finding is by converting a used plastic bottle into vanillin. They added the E.coli to the degraded plastic waste.

Even though they’ve succeeded and that they said the vanillin would be fit for human consumption, the scientists said that they still need to do further experimental tests.

First author Joanna Sadler said, “This is the first example of using a biological system to upcycle plastic waste into a valuable industrial chemical and this has very exciting implications for the circular economy.

“The results from our research have major implications for the field of plastic sustainability and demonstrate the power of synthetic biology to address real-world challenges.”

Vanillin is actually something very common in the food and cosmetic industries. We also use it for the formulation of herbicides, antifoaming agents, and cleaning products.

“Our work challenges the perception of plastic being a problematic waste and instead demonstrates its use as a new carbon resource from which high value products can be obtained,” said Principle Investigator of the study, Dr. Stephen Wallace.

This study may be new, but it lays the foundation for further studies. Maybe in the future, other scientists can maximize this plastic vanillin production, hopefully in larger scale.

Breaking down and recycling polystyrene

This one may not look really impressive because it doesn’t involve natural materials, but it’s worth mentioning anyway. After all, polystyrene is a problem on its own.

Because of its chemical stability and durability, plastics like polystyrene are not usually recycled. Even if the technology to do that exists, it’s not economically feasible.

Sorting and separation take more time and effort, and chemical processing and remanufacturing requires a significant energy input and toxic solvents. And to make things worse, the recycled ones have poorer performance than the new ones.

Ames Laboratory and Clemson University scientists have managed to deconstruct commercial polystyrene. This one’s special because it was in a single step, at room temperature, in ambient atmosphere in the absence of harmful solvents.

That makes it low-energy and therefore greener.

Called ball-milling, this process places materials in a milling vial with metal ball bearings which is then agitated until a desired chemical reaction occurs. This experimental approach, called mechanochemistry, has numerous applications in new materials synthesis.

And in the field of plastic recycling, that property can be benefits.

Ames Laboratory Senior Scientist Viktor Balema said, “This method represents an important breakthrough that enables dismantling of a polymer simultaneously with its break-down under ambient conditions, that is, ~300oC below the thermal decomposition temperature of the pristine material.

“We think this proof of concept is an exciting possibility for developing new recycling technologies for all kinds of plastics, and that will contribute to establishment of the circular economy.”

Professor Igor Luzinov from Clemson University noted, “This discovery opens new avenues for low temperature recovery of monomers from multicomponent polymer based systems such as composites and laminates.”