You are here: Home / The Species / New Species Of Colorful Pygmy Seahorse Is Found Near Japan

If you think you have not heard about this species of seahorse yet, you are definitely not the only one. Not only because the population distribution is limited around Japan, but also because it is a newly discovered animal.

The name Japan pig came from what local divers called the seahorse when they first met this animal. “To the locals, it resembles a tiny baby pig,” said Graham Short, the lead author of a study about this animal, to National Geographic.

The discovery is a good news for researchers, without any sad news following. So, let’s spread the happiness of this discovery by learning about this new species. 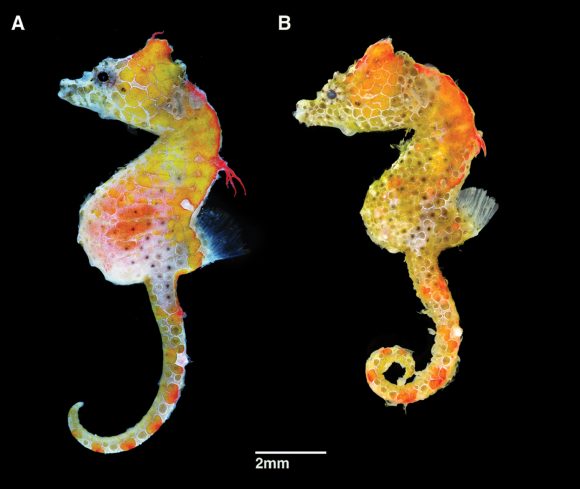 You might have heard about the discovery of a sea turtle which is already endangered the time it was discovered by researchers. Well, this is not the case with Japan pig. This creature is pretty stable in population, not rare, endangered, or threatened.

Although this species is newly discovered, but actually Japan pigs have already around for so long. The reason why people call this animal a ‘new’ species of seahorse is because for so long time they have been mistaken as other pygmy seahorse species.

Well, that kind of mistake is understandable since the size of this little seahorse is so tiny, not bigger than a grain of rice. You will find it difficult to tell the differences between this seahorse and other species using only naked eyes.

Not only that, they are so small, but because their vivid coloration makes them difficult to tell when blending with algae-covered rocks where they live in. “It’s like a seahorse wearing a paisley pattern,” said Kevin Conway, a curator of fishes at Texas A&M University. 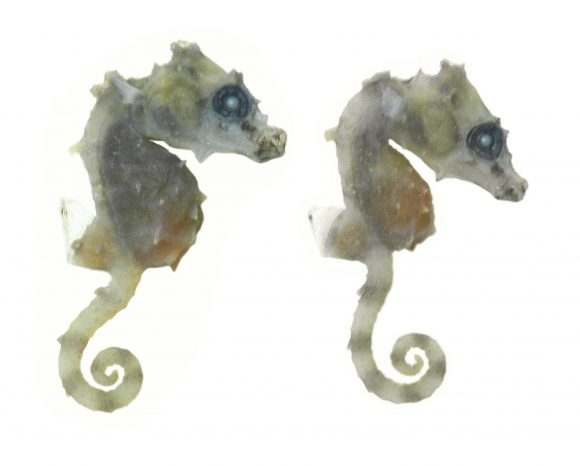 Being so small with measures around only 16 millimeters, Japan pig is able to survive the great hunt for seahorse done by human. We know that the biggest enemy for seahorses is our species, human, because the animal is believed to be able to give medicinal use.

People are known to hunt seahorse in the wild to be used as traditional Chinese medicine. Chinese people believe that this animal can treat asthma, insomnia, abdominal pain, and is believed to be a powerful aphrodisiac that can increase sexual potency.

Every part of of a seahorse body is ‘useful’, thus the traditional Chinese ‘medicine’ usually comes in powdered form. The powder is actually crushed whole seahorse bodies which have been dried under direct sunlight before.

But since Japan pig is too small, it is considered not worthy of the efforts to hunt for the seahorse to get sufficient amount of powder. Predators also seem to overlook this creature because of the size of this sea creature.

It might be the reason why, even if the animal is small and look so fragile, they show now cowardly nature toward bigger creatures including human. Short said that when he examined this animal, they showed a behavior which made them “seem to be quite active, even playful”.

Will Not Be In Aquarium 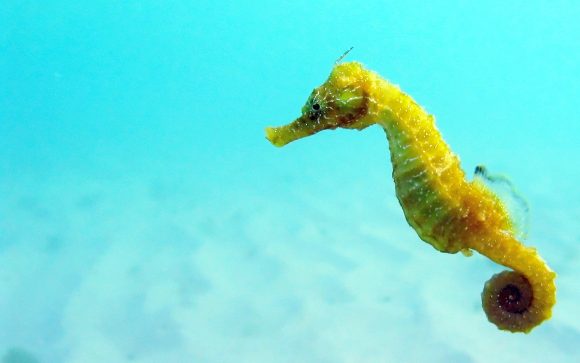 Having vivid colorization and entirely just cute, and in addition it is not endangered or threatened, you might want to keep some of those little seahorses in your aquarium. But it seems like you will not be able to get one.

Not only because they can easily hide themselves in the wild, but also because they are too tiny. Convention on International Trade in Endangered Species of Wild Fauna and Flora (CITES) strictly prohibit trade in seahorse under 10 cm. With this strict rule, Japan pigs cannot even fly by planes.

This is also the reason why ‘legal’ Chinese traditional medicine producers cannot make this seahorse an ingredient for their medicines, even if they want to. It seems like the size of this seahorse is very beneficial to their species.

The only ones who can take this animal from the nature and put it in captivity are scientists for the sake of studying this animal. But still after the examination and study, the scientists have to distribute the animal wisely because they have their own set of rules to follow.

So, the only way you can meet the cute little animal in real life is by going to Japan and dive near Hachijo-Jima island by yourself. Even then, you should pay close attention to be able to notice the presence of the Japan pigs.

So, the question is, about what’s so unique about this species that it needs to be differentiated with other kinds? Well, firstly let’s talk about the result of CT scan. From the examination, researchers found that Japan pig has odd ridge of bone on the upper back, which may have evolved due to sexual selection.

Another difference is the wing-like structure on their back. While other species of pygmy seahorses have two pairs of the structure, Japan pig only has one pair. However, researchers still don’t know whether it will give the creature more benefits or loss since researchers themselves are also still wondering about the real usage of this wing-like structure.