You are here: Home / The Species / Japanese Snow Monkeys And Their Obsession To Hot Springs

Japanese macaques, or more likely known as Japanese snow monkeys, are one of the most famous animals from Japan. They are called snow monkeys because they are living in snowy area of Nagano, far north part of the lands of Sakura.

The looks of the monkeys are distinctive, with brown to greyish fur and red to pink faces. Locally, they are called Nihonzaru, the combination of “Nihon” (Japan) and “Saru” (monkey). Indeed, the species is native to Japan, and very familiar to Japanese people.

They are known to be the only nonhuman primate species to be inhabiting such north and cold area. It means no other primates, except human, are found to be living more northern and in colder climate than them.

But those physical and geographical features are not the ones making this species famous all around the world. Those monkeys are known to have unique habits that will draw your interest to them. In this article, we will talk about those habits.

Japanese people believe that bathing in hot springs, especially natural hot springs, will bring you healthiness both for your body and your minds. Although these monkeys might have not heard about this information from us, but they are known to love doing it.

Not only one or two monkeys doing the activities, but most tot all of them are seen to do the activity in almost daily basis. Even bathing in the hot spring with the monkeys has been a tourist attraction in the area since the monkeys are friendly to human too.

Researchers first suspected that the reason why they do it was to warm themselves from the cold winter in Nagano. Indeed, in the northern part of Japan winter can be torturing and harsh, but apparently that’s not the only answer.

To learn better about their behavior, a group of researchers from Kyoto University studied 12 female Nihonzarus and observed the behaviors of the monkeys in two different seasons. First is the birth season from April to June, and the winter season from October to December.

The researchers observed which monkeys are bathing in the hot springs most often and for how long, and the measured the amount of glucocorticoid hormone in their fecal. This hormone is related to the stress level of the individuals, and what they found was shocking. 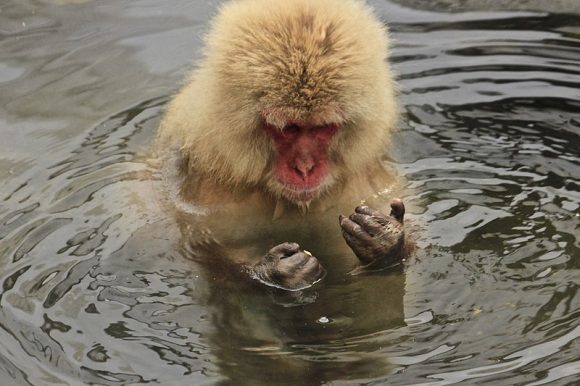 The researchers found out that instead of just putting themselves in the hot spring for just getting warmer, the monkeys have another reason to do so. Bathing in the hot springs make them calmer and helps them avoid getting stress.

Another discovery of behavior that the researchers found was that higher ranking of monkeys spend more time in the hot springs. The reason is because those higher rankings are often involved in more conflicts, which may result in more stress.

Thus, not only to keep themselves warm in the cold area, but the monkeys are bathing in the hot spring to make themselves calm and Zen. So, they can survive the cold winter and face internal conflicts without getting mad and risk their mental and physical health.

This behavior is more or less similar to human being, anytime we are under the threat of getting stressed, we try to find a way to get rid of it. Whether by taking a nice and soothing bath, playing video games, or just go to sleep. The choice that the monkeys picked was the first one. 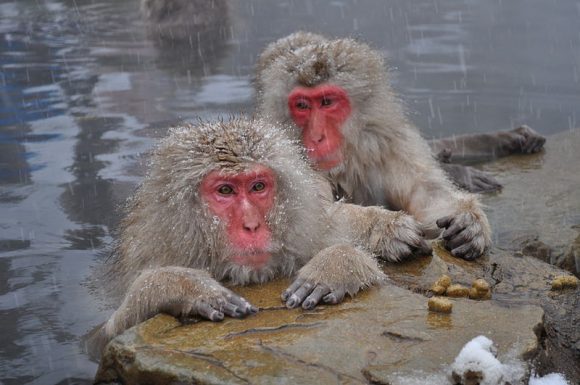 The monkeys are also considered as one of the smartest nonhuman primates in the world. Well, taking a nice bath in the host springs is not the only behavior of the monkeys should be noticed, because researchers found that their stress management was not the only advanced behavior they have.

Studying the monkeys’ behavior toward hot springs was not the only research has been done to them. Before, many researchers have conducted behavioral tests to them and every single of the test always resulted in interesting discovery about the monkeys’ intelligence.

About 50 years ago, a group of researchers tried to supply the foods for the monkeys by giving food handouts. Since then, accepting foods from human has been considered acceptable by the groups, considered humans as friends, and the monkeys have less time to do foraging.

It means they more spare time to do things other than foraging by just becoming friendly to human, and that’s why they needed something to do in their spare time. So, what do they do in the spare time? Some of them are hot-tubbing like mentioned above, some are playing with stones, and some others are ‘cooking’ their foods. 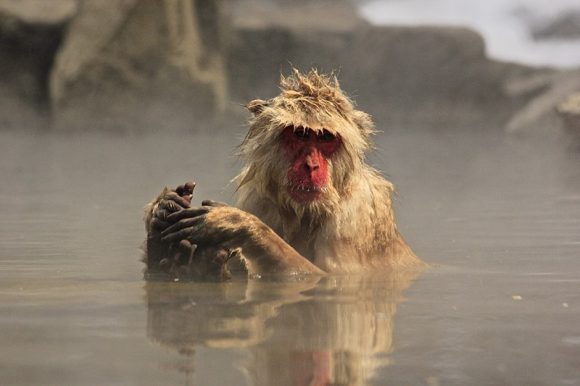 In 1979, Michael Huffman, a primatologist at the Primate Research Institute (PRI) at Kyoto University noticed a female monkey playing with stones. “I had never seen, or heard about, anything like it. It was like a child playing with building blocks,” he said.

When he came back to the site four years later, he found out that this kind of behavior has been adapted and spread to other monkeys. “Half the group was playing with stones, banging them on nearby roofs and making a total racquet,” said Huffman.

Thus, it seemed that the monkeys are also following trends, like human beings do. “It shows the intelligence of the primate to us. I couldn’t understand why a behavior that seemed to have no adaptive significance—it didn’t provide an edge for survival or reproduction—could spread through a group and be maintained in a society for so long,” Huffman explained.

Not only that, the monkeys are also known to ‘cook’ and ‘season’ their foods. Earlier in 1953, a monkey named Imo discovered a method to improve the quality of the food it got by washing it. about 10 years after the discovery of the behavior by scientists, another researchers group found out that more than two-third of the group were washing their foods.

With the discovery of unique yet intelligence behaviors of the primate species, researchers concluded that Japanese macaques are one of the most intelligence nonhuman primate in the world. Do you agree with the scientists?

Top 5 Natural Hidden Gems in Japan That You Must Visit

Let’s Talk About The Peculiar Monkey ‘Gang’ War In India