You are here: Home / The Species / The Fairy-Like Creature In Your Garden: The Hummingbird

Sometimes you might find some small buzzing creature flying around the flowers in your garden. Your kids might call it a fairy because it appears alike, but we know that fairies only exist in fairylands. When you approach it up close, you will see it clearer and instead of fairy you will find it is actually a kind of bird.

It is hummingbird, and it is not your kids’ fault to mistaken it as a fairy. Indeed, this bird is among the smallest birds on earth, ranging only up to 13 centimeters in length. The smallest species of it, the bee hummingbird is only 5 centimeters, weighing less than 2 grams.

The only interesting thing about this bird is not only about the size of it. There are so many other interesting facts about it that we are going to talk about in this article. First of all, let’s talk about how this bird got the name. 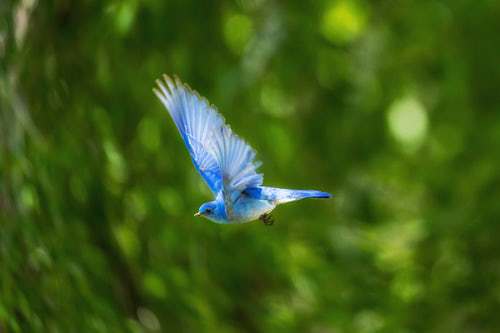 Hummingbirds are named after the humming sound it produces when flying. Unlike usual birds that only flap their wings once in a while and glide on the air, hummingbirds constantly flap its tiny little wings as they fly.

The flapping produces high frequency sound audible enough to humans. The flapping speed varies from around 12 beats per second to 80 beats per second, depend on the size of the bird and species. This way of flying also allows the birds to do some tricks and maneuvers mid-air that no other birds may.

Just like dragonflies, hummingbirds can fly in any direction they want. They can fly up, down, sideways, backward, diagonally, and definitely front. But that’s not the only interesting part of their flying ability.

They can also hover in place by coordinating their vision and body position. Amazingly, they can do it even if they are faced to high wind speed such as in a wind tunnel. This ability is presented by their incredible vision that can separate the apparent motion caused by their movement and motion caused by external forces.

Hummingbirds are also for their speed in flying compared to their body size. Researchers have examined the birds and found out that their top speed exceed 15 meters/second. For some species, they can even reach 22 meters/second while diving. 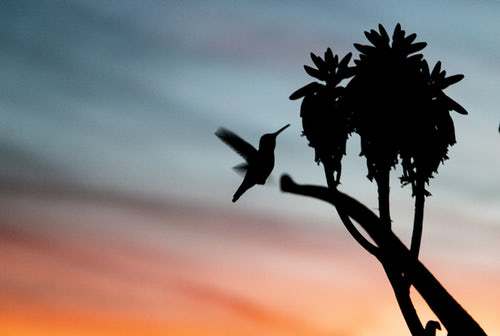 Being one of the smallest kind of birds, hummingbirds are actually granted with super powers that exceed other kinds of birds. Of course, these super powers are more than their incredible control of body mid-air.

They have amazing sight, that make them can even see the ultraviolet rays. This superfine sight is the result of evolution in their retinal neurons and neuronal hypertrophy which is relatively the largest in any birds that exist in a region of brain called pretectal nucleus lentiformis mesencephali.

Their incredible sight allows them to notice even the smallest changes in their line of sight caused by their own motion while hovering mid-air. This ability then allows them to stay in place while flying, like mentioned before.

However, despite their incredible sight, this animal has no sense of smell. When you see one hummingbird flying around in your garden to find flower, they don’t use their smelling ability to find one. They learn to recognize the shape and color of flowers merely with their sight. 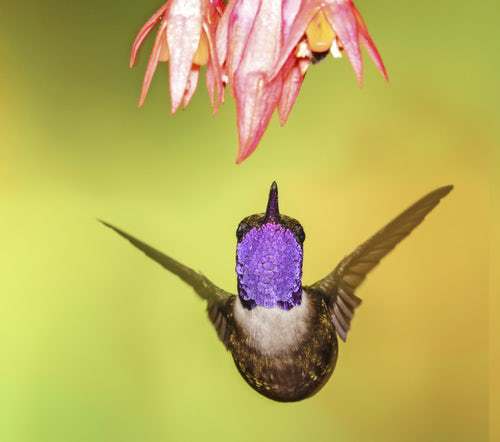 Another superpower that this bird own is marvelous metabolism control that no other animals (except insects) have. Their hearts can beat up to 1260 times per minute and breath 250 times per minute. This metabolism rate allows their muscle to consume oxygen more than 10 times elite human athletes.

In this case, the newly ingested sugar they consume can be fully processed during flight in only about 30 minutes. While the fat they consume is stored in their body until it can augment their weight up to 100% which is then later used to be the fuel of their migratory flight.

Their migratory flight is not an easy one, looking on the size of their body. They have to cover at least 500 miles or about more than 650 kilometers from Gulf of Mexico to United States. In addition, hummingbirds don’t fly in group, they choose to travel alone. Imagine flying that far with that tiny size of body.

But that’s not the only amazing thing about this bird’s metabolism. When food is scarce, they can slow the high metabolism rate up until 1/15th of their normal rate, by entering a hibernating-like state called torpor, so basically they have very efficient metabolism control depends on their condition. 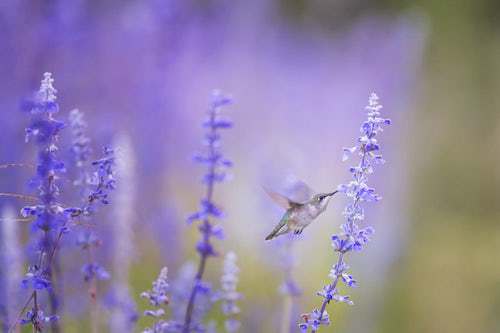 The incredible vision combined with high metabolism rate granted the birds with unique cleverness. In the wild, looking on their smaller size compared to other birds, they are prone to predators. But somehow they can endure the wild with their cleverness.

Hummingbird also has very good memory which is used to forage effectively. They learn the safest time to forage and memorize the times when food is abundant. Using their intelligence, they first map the position of flowers in their areas and fly from one to another in the most efficient route.

Not only that, they also learn to remember when is the time bird feeders are given refill and how long will it become empty. But sometimes when the amount of food is abundant, larger animals tend to go out and find some foods too, which is dangerous to the birds.

Thus, not only trying to memorize the times when the foods are ready, they also calculate the safest times to get it. This way, they can spent their time in their nests nurturing themselves or their kids and go find some foods when the environment is safe enough and foods are ready to eat.

Well, this creature called hummingbird might appear small and weak. But definitely they are granted super powers that no other animals have. So, next time you find one roaming your garden and your kids call it a fairy, tell them about the abilities of this bird, and let your kids decide what it is.