You are here: Home / Hello Earth / Who’s A Good Dog?! These Two Labradors Can Sniff Out Invasive Species

Humans rely on dogs when we can’t do something that involves great sense of smell. Indeed, dogs have it about 10,000 to 100,000 times better than us so we’ve asked them to aid police work like finding missing people, explosives, and stolen items.

But it turns out that those are not everything. Dogs can also search for both endangered and invasive species, helping conservation efforts and works.

Two Milwaukee Labrador retrievers called Ernie and Betty White have been using their snouts to search for New Zealand mud snails. Snails are usually pretty okay, but this particular species is invasive, plaguing Wisconsin waterways for the last decade.

Per the US Fish and Wildlife Service, these snails were first discovered in Idaho in 1987. Like many invasive species, they’re resilient and able to reproduce really fast.

Mud snails can adapt very well in various environments, and a single female and its offspring can produce 40 million snails in one year. As a result, they consume half of the available food in streams, making it very difficult for the native species to live and prosper.

It gets worse. The size of this invasive species is so small and hard to detect, measuring only one-eighth of an inch long (about 0.32 cm).

Finding these snails get a little bit easier thanks to these two pooches. They both could sniff out and find the invasive species, proving their skills to the Wisconsin Department of Natural Resources (WDNR).

The skills didn’t come naturally, though. Before, they underwent rigorous training first. After two whole months of snail smelling, the labs went on to prove their skills with a final test.

There were 30 jars filled with sediment, some with snail DNA and some without. Ernie and Betty White’s training were successful. Both of them were able to deliver result close to 75% accuracy.

WDNR aquatic invasive expert Maureen Ferry said, “I have to tell you, I was really skeptical.”

We should thank the dogs, for sure. But above all, the credit should also go to their trainer Laura Holder. Holder is the executive director of Midwest Conservation Dogs, Inc who’s trained Wisconsin’s first on-staff conservation dog, Tilia, a 3-year-old chocolate Labrador.

Not the only ones

Tilia might be the first conservation dog to do this job in Wisconsin. But we’ve recruited dogs for conservation efforts since the 1890s. According to a 2016 paper, back then, canines were tasked to track down two endangered birds in New Zealand, namely kiwi and kakapo.

Throughout the US, there are also conservation programs using canines. For example, Tucker, a ten-year-old male Labrador, tracks orcas off the Canadian coast by searching for the scent of whale poop from the deck of a research boat.

Researchers have been using canines to detect huanglongbing, which is also called citrus greening, a bacterial disease that can wipe out orange fields.

And, dogs have helped us during the pandemic as well. In Finland, four dogs were used to detect Covid-19 at the Helsinki Airport with almost 100% accuracy.

Dogs have body awareness too

This is a bit unrelated to dogs’ ability to help conservation efforts, but apparently, a new study published in Scientific Reports states that dogs are aware of their bodies.

Sometimes, we see that dogs are not really aware of their size and how much room they take up—if the dogs are medium to large breed, that is. Pups and dogs can jump at new people, not realizing their strength. Some of them also like to be lap dogs even though they’re already big.

What does this mean? An individual with body awareness has the capacity to perceive themselves and where they are in space. Researchers at Eotvos Lorand University in Budapest add canines to the list of animals, including humans, that seem to understand how their bodies move through the world around them.

Study author Rita Lenkei said, “Dogs are perfect subjects for the investigation of the self-representation related abilities as we share our anthropogenic physical and social environment with them.

“Thus, it is reasonable to assume that at least some of its forms might appeared in them, too.”

Researchers used similar experimental methods from studies of body awareness in elephants and toddlers. They tested 32 dogs of different breeds and sizes on their ability to recognize their body as an obstacle.

In the problem-solving experiment, the canines had to grab a toy that was attached to a mat they were sitting on. If they were aware of their bodies, dogs knew they needed to get off the mat to complete the task and give the toy to their owners.

Experimental conditions were then compared to control groups in which the toy was attached to the ground or wasn’t attached to anything at all.

The dogs quickly moved off the mat with a toy attached more often than they did when the toy was stuck to the ground instead.

Biologist at Eotvos Lorand University Peter Pongracz said, “Then dogs pulled on the toy, it also started to lift the mat — thus the dog felt that the mat was jerking under its paws as it was pulling the toy. In this scenario, the dogs quickly left the mat, usually still holding the toy in their mouth; then they gave it to the owner.”

This is not the first time we’ve tested dogs on their sense of self-awareness. The researchers argued that the previous tests were not ecologically relevant.

Dogs couldn’t recognize themselves in the mirror mark test, unlike other species such as elephants and great apes which are masters of these tests. 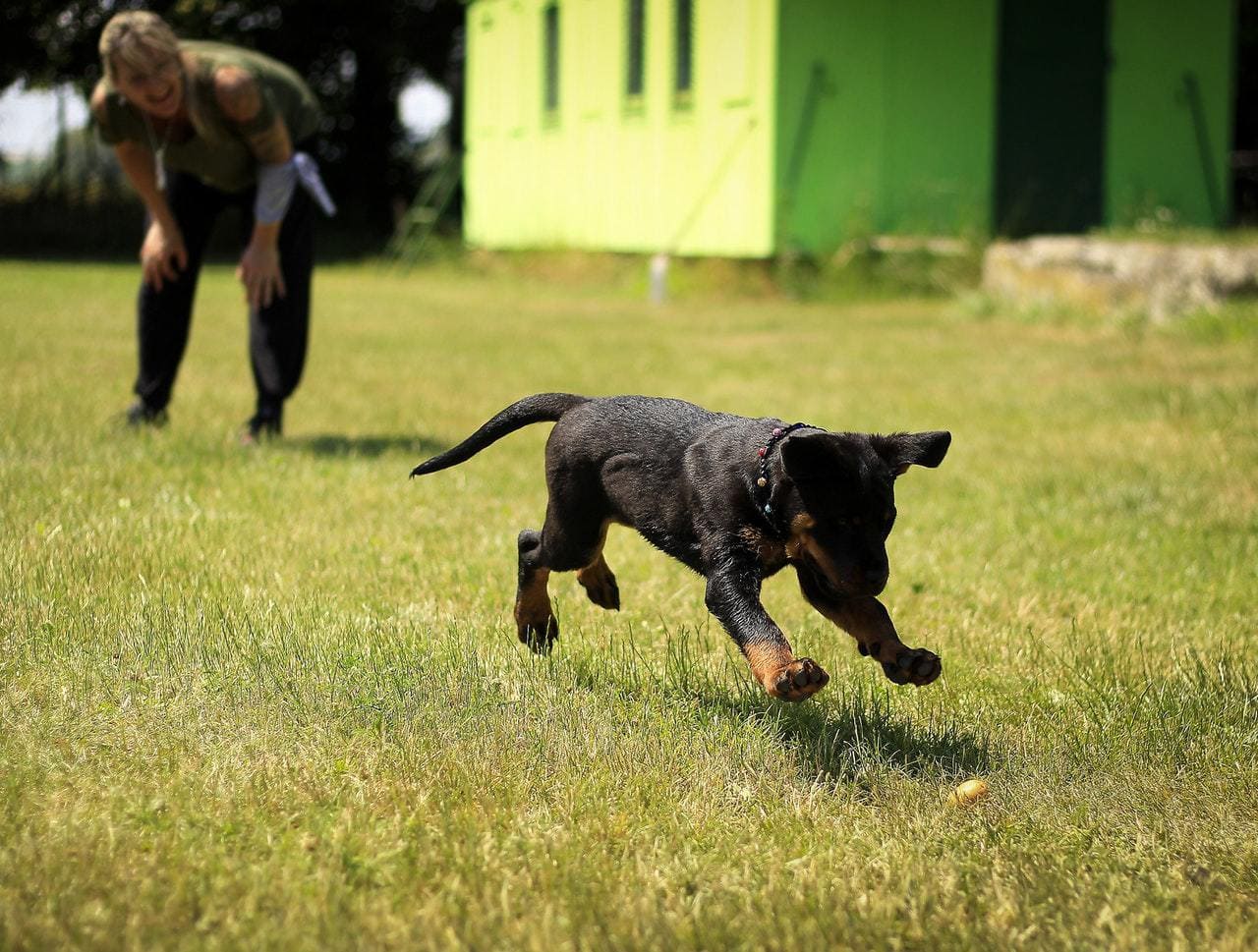 Even though dogs didn’t pass the mirror mark test, they still have some level of self-awareness and they could pass other self-recognition tests with flying colors. How so? They can recognize their own odors and remember specific events.

Pongracz explained that past evidence led the researchers to suspect canines show a lower level of self-representation that can only be observed in simpler tests that focus on their body and environment.

“For a dog, being aware of how big is the body, or how the body can be an obstacle, it’s reasonable to expect. This is an animal with a complex nervous system, it’s an intelligent animal, it’s a fast-moving animal.

“If you think about how dogs eat, you can imagine that a dog often has to hold down a bigger chunk of food, let’s say, and use its own body as a counterweight to be able to take off meat from a bone or whatever. So, this is an appropriate context to test this cognitive capacity,” said Pongracz.