You are here: Home / Hello Earth / Look How These Elephants Feed On Plastic In Landfill

Elephants are the largest herbivore on the surface of the earth. Even though their bodies are so huge, but they don’t use it to attack and kill other animals to eat them later. That’s why, this animal is considered as the symbol of wisdom.

But what if you see them scavenging for food in landfill, searching for the tiniest bits of food waste with their hungry eyes? While beside them, their calves are moaning because their mothers cannot produce enough milk to feed them.

If you find it hard to imagine, we are here to help you picture it in your minds. Elephants in Sri Lanka are doing the exact thing mentioned above because the landfill is located too near to the wildlife sanctuary where they are living in.

To understand more about this phenomenon, let’s look deeper into what’s behind it in this article. 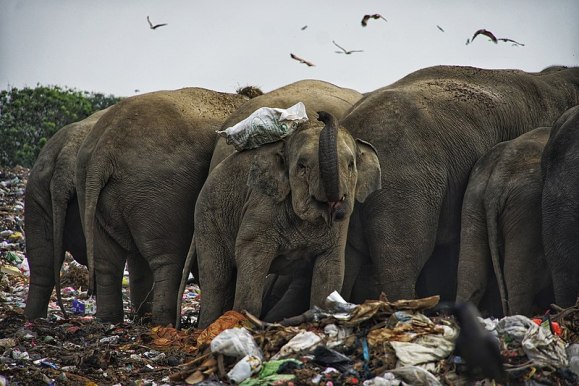 Photographer Tharmaplan Tilaxan of Jaffna, Sri Lanka, captured the moment and it suddenly became a viral topic. Not only because it is a strange thing, it is also a huge environmental thing that everyone in the world should know.

It poses a problem to everyone, because elephants living in the wildlife sanctuary are breaking into the landfill quite frequently. And that’s not only a problem for humans, but also for the largest animals on the surface of this planet.

The main reason why those elephants are breaking into the landfill is to find some food. We all know that we produce a lot of food waste that big part of it is loved by elephants, such as slices of vegetables and fruits. 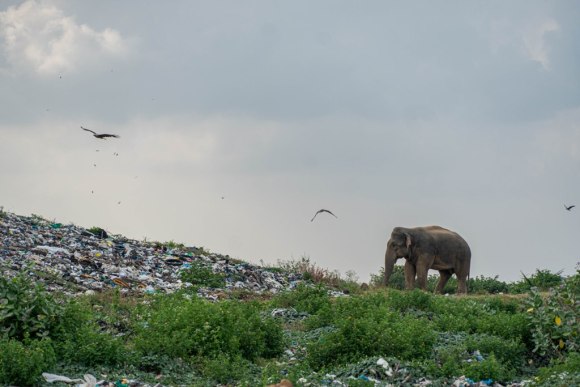 Plastic waste is so mixed up with the food waste, thus some pieces of plastic are also eaten by the elephants. Elephants cannot pick their food effectively in the landfill because our waste is too small for their size to do that, thus the consequences.

The landfill site was built only around 10 years ago, which mean it is a pretty new thing for the elephants. Ampara wildlife sanctuary is home of 300 Sri Lankan elephants, while the country is predicted to be home of 7,200 others.

Even though it is still cannot be identified how many of those 300 elephants are regularly visiting the landfill, but elephants are highly social animals. When many elephants are breaking into the landfill to find some delicious treats, others will likely to follow the action and more likely to teach their heirs to do the same thing.

This phenomenon is predicted to play huge part in a record-breaking number of elephant death occurring in 2019. Even though most of them are killed by people’s hands directly, but health problems caused by digesting plastic also contributed a lot of into the number. 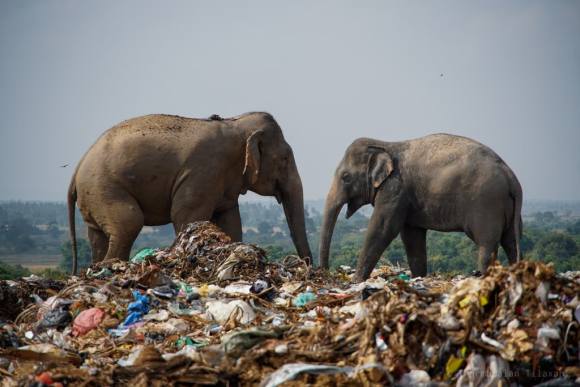 “Sri Lanka considers elephants to be a national treasure, but we see these animals reduced to eating rubbish,” said Asian elephant expert Jayantha Jayewardene to AFP. “They have become docile and got so used to tractors bringing them garbage.”

Since it went viral on the internet, Sri Lankan government decided to do something about it. They dug trenches around 1.8 meters deep and erected electric fences so that elephants will find it too hard to enter the landfill.

“Initial work has already begun at two dumps in the Ampara district and we hope to complete the work by early next year,” The Department of Wildlife Conservation said. They also have been reducing the number of open tips, from its initial 54 tips to 15 since 2017.

However, the problem of elephants breaking into the landfill still persisted from 9 of the 15 open tips. Many elephants were still found dead after eating too much plastic even though the mission has been carried out.

That’s why, Sri Lankan government then decided to ban single use plastic since January 2020. In addition to that, authorities also have implemented a ban to plastic waste import starting from August 2020. The country itself has outlawed manufacturing and importing non-biodegradable plastic for food wrap and shopping bags since 2017. 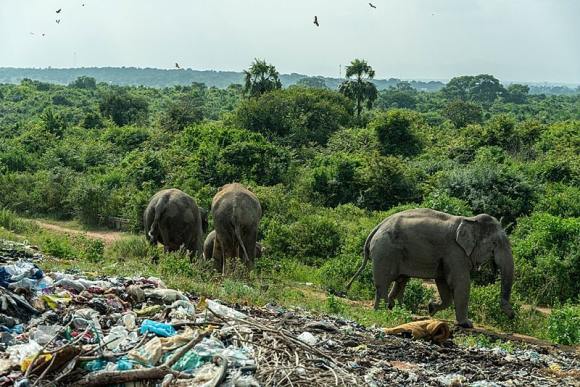 The news about elephants breaking into our infrastructure is not a new thing in this modern era. However, it is not used to be like this some decades ago. Why? Because our modern lifestyle gives them a problem that didn’t exist back then.

We build infrastructures often times too close to their homes, and we only care about protecting our newly built infrastructures instead of the wildlife. This is an irony for a country that consider elephants as national treasure.

What is really needed is a good comprehension of the importance of wildlife sanctuary, and the basics of how to make it a real sanctuary for the wildlife. By building fences and trenches, it might be an effective way to prevent the elephants entering the landfill.

However, is that what sanctuary really means? “These elephants no longer forage in the jungle. They are like zoo animals. It is a sad sight to see national treasures picking through rotting rubbish,” said Jayantha.

What the elephants need is a place to live with the nature, not with infrastructure. Giving them a proper space and maintain the tranquility of it. We live in nature and with nature, not the other way around. We are obliged to respect them, not demanding them to respect us.