You are here: Home / Eureka Green / Fruit Tattoo – The Future of Natural Branding and Packaging ?

At the moment most of the fruit that is sold in a shop is wrapped in plastic , and being stickered

The humble fruit sticker may seem an unlikely cause for environmental concern but removing it from produce could create huge savings in plastic, energy and CO2 emissions , not to mention additonal wasteful packaging also.

The stickers are sticky enough to stay on the fruit through the whole distribution and sales network, they are so sticky that the customer can’t get them off 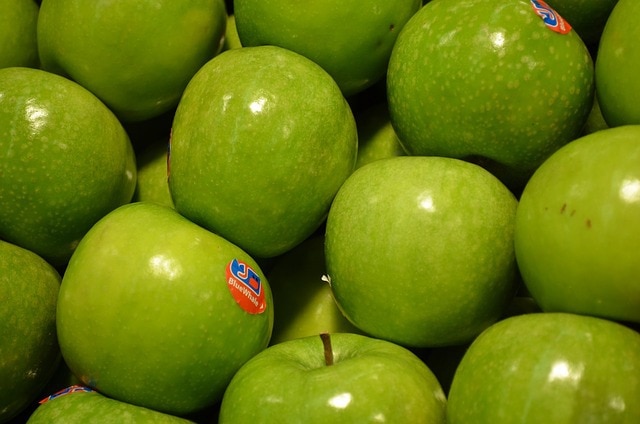 “I was picking all the little stickers from the Piggly Wiggly off my plums and my avocado, pears and my peaches,” said a woman named Jean Lemeaux, 76 “Then I had to make fruit salad out of the ones that got hurt when I took the stickers off, and then I had to wash the glue off the other ones before I put them in the fruit bowl.” Lemeaux went on to complain how the stickers get in her hair.

A natural branding with laser technology to etch the label on the fruit’s skin is the answer. This technology itself has existed for well over a decade; it scored its patent back in 1997

A University of Florida scientist named Greg Douillard invented a machine that “etches” labels on the outermost surface of the fruit, using carbon dioxide to remove pigmentation

This technology, created by a Spain-based company called Laser Food, opens a new way to brand produce that are normally shipped without fancy packaging. Rather than slapping on annoying stickers most people forget to peel off, the laser etching lets the branding become one with the skin – and consumers can eat right through the engravement

Despite the laser technology, Laser Food promises that the process is gentle on fruits and will not damage the goods underneath the skin, making it possible to laser cut more fragile fruits like bananas and tomatoes. The machines can laser cut up to 54,000 pieces of fruits per hour.

The laser cutting technology can do more than just eliminate sticker material. Companies can now etch QR codes or barcodes to help consumers scan and learn more about the product, such as nutritional information or the company that grew the crop. Supermarkets can also cut their logo onto the produce as a way of seamless marketing.

“Imagine that you can code each piece of produce so it can easily be traced back to its origin. Think of how helpful that could be when there is a food safety issue.”

“Big produce companies are spending a quarter million dollars each year on sticky labels that end up in the trash,” Greg Douillard says if you buy one of his machines (retail of $184,000), however, it lasts for at least 10 years and never requires additional supply costs. “You can kind of see why the label companies don’t like this.” 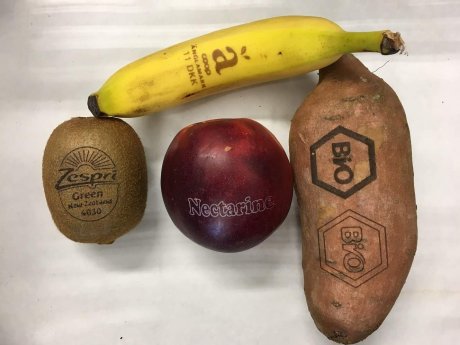 The laser technology also creates less than 1% of the carbon emissions needed to produce a sticker of similar size.

Stephane Merit, business development manager of the Spanish company behind the technology, Laser Food, says with millions of stickers used on food produce around the world everyday, the technology could make a “significant reduction in the amount of paper, ink, glue” being used as well as the cutting the energy used to produce and transport them.

Laser Food’s technology has been around for several years but has previously been used for marketing or branding, without being explicitly linked to sustainability.

Fruits with printed skins are already on supermarket shelves in Spain, Sweden, and the UK

“By using natural branding on all the organic avocados we would sell in one year we will save 200km (135 miles) of plastic 30cm wide. It’s small but I think it adds up,”

“The next step will be to use natural branding on edible skin products, such as apples or nectarines,” says Peter Hagg, ICA business unit manager.

Avocados with laser-printed barcodes are also going on sale at Mark & Spencer as part of a drive to reduce paper waste.

The labels, which are etched onto fruit’s skin with lasers instead of stickers, will save 10 tonnes of paper and five tonnes of glue every year according to M&S.