You are here: Home / The Species / Gerenuks Can Live Its Whole Life Without Water

Gerenuk, or Litocranius walleri is a long-necked antelope that usually can be found in eastern part of Africa. The name gerenuk is a derivation from Somali language “garanuug” which means “giraffe necked animal”, mentioning its physical feature.

The species was first introduced to the rest of the world by Victor Brooke in 1878. This animal is also known as giraffe gazelle because of its long neck. This animal can reach up to 105 centimeters tall and 52 kilograms weight.

Basically, gerenuk can live in any area of Africa, like wood, desert, or open scrublands as long as the area can provide the animal sufficient amount of vegetation to eat. This animal is a highly efficient animal to live in Africa because of its unique nature and physical features. 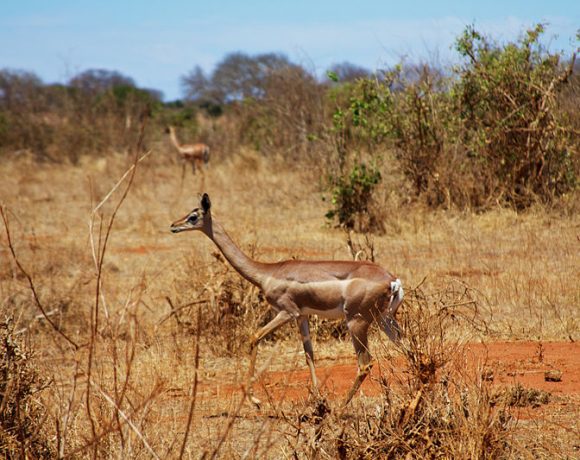 Drinking water is a basic need for every animal, especially large animal species like mammals. Even water is still an important life support for camels, which can save gallons of water in its humps, that seem like rarely drinking the liquid.

But for gerenuks, drinking water is only a mere option to do. They even do not need to drink water their entire lives to survive. The only thing they need to consume is food, a lot of it. Indeed, they eat most of the time in their wake of the day and just peacefully sleep in the night.

This is because gerenuks get the moisture they need to survive from the plants they eat, thus they eat a lot of plants in their lives. That’s why, gerenuks can also live in dry dessert areas and scrublands without worrying about water sources.

Although the giraffe gazelles don’t need to consume water, they still love another kind of water. Gerenuks are often seen enjoying the rain like a kid by exposing their bodies intentionally. Some researchers predict that this behavior is to cool down their body temperature.

They Don’t Pee For Territory 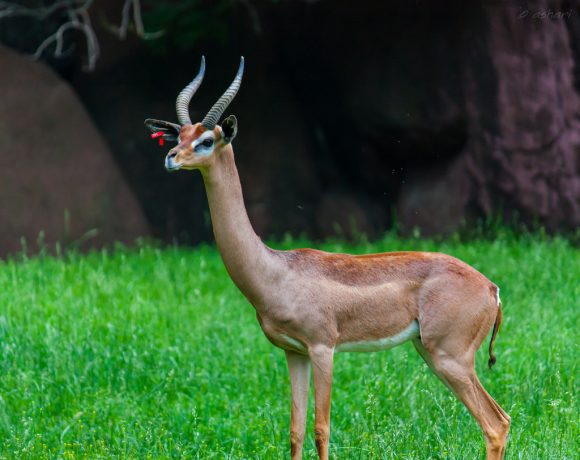 Gerenuks are very territorial animals, and male ones usually lead solitary lives. However, some males are usually found to follow a small group of its kind consisting of two to six members. Gerenuks herds usually consist of same-sex members, beside mothers and their calves.

The wide of gerenuk’s territory usually about 3 to 6 square kilometers large and sometimes overlap the territory of others. The territories are marked with a scent produced by a preorbital gland located in front of their eyes and more on their knees. Thus, they don’t pee for territories like big cats.

Female Ones Are Gentle Supermoms 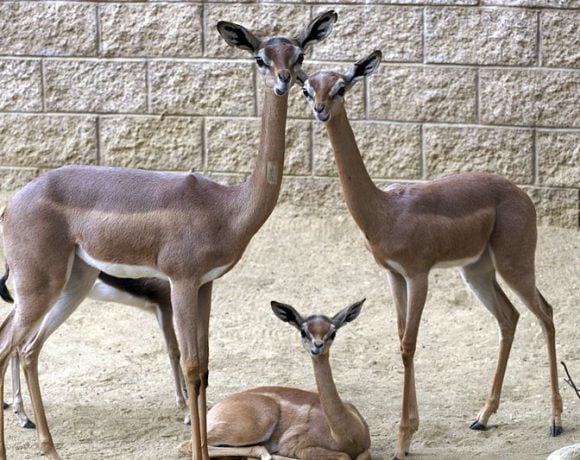 The giraffe gazelle is an easy animal to breed, because they can breed at any time as long as they aren’t currently in gestation period. Their diets are also easy to find, basically all kind of vegetation and they don’t need much amount of water.

In addition, female ones reach sexual maturity at relatively young age, just in one year. While the male ones reach it latter by only six months difference. However, wild gerenuks usually only reproduce after they acquired a territory, usually at the age of 3.5 years old. 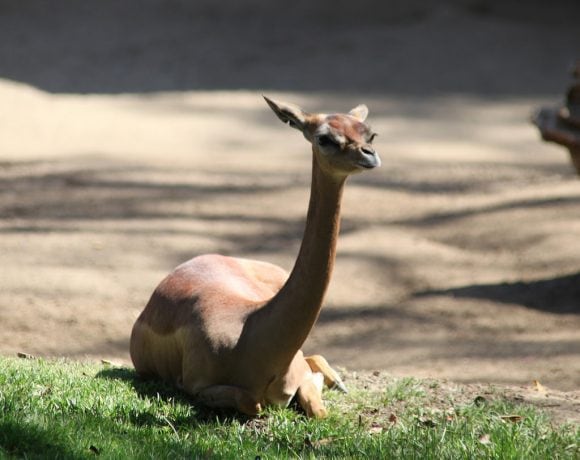 The gestation period usually lasts for about 7 months and mother gerenuks usually give birth only a baby at a time. When born, the baby usually weight about 3 kilograms. The mother then licks her baby and eats the afterbirth.

The baby is breastfed three times a day and cleaned by its mom every time the calf after breastfeeding. Cleaning the baby is important to protect it from predators. Mother gerenuks are often eating the waste of the babies to remove any scents informing about the presence of the young calves to predators.

But that’s not the heartwarming part of gerenuk moms’ nurturing lives. Like humans, they communicate with the young calves with gentler voice than usual. The females usually communicate with calves using lighter and more delicate tone. The bleats they produce when talking with the kids are much softer. 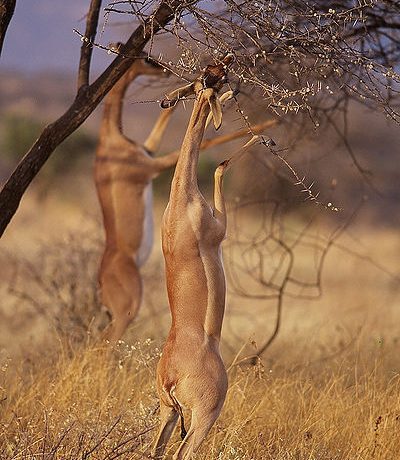 Yes, not only because they eat most of the time, but also because they have unique way to eat. Unlike other kinds of antelopes which eat from the ground, this animal lives from more various diets. They are usually known to eat leaves from the trees and their favorite one is acacia leaves.

But how do they reach the taller source of foods? Gerenuks use the benefit of their long necks and ability to stand on their hind legs to reach taller trees. The front legs are used to pull down branches so they can reach even taller leaves.

Thus, it is common to see gerenuks standing tall like us while eating. This behavior is also a unique feature to determine this kind of antelope with other species. They can stand up to two meters tall, about twice of its original height. 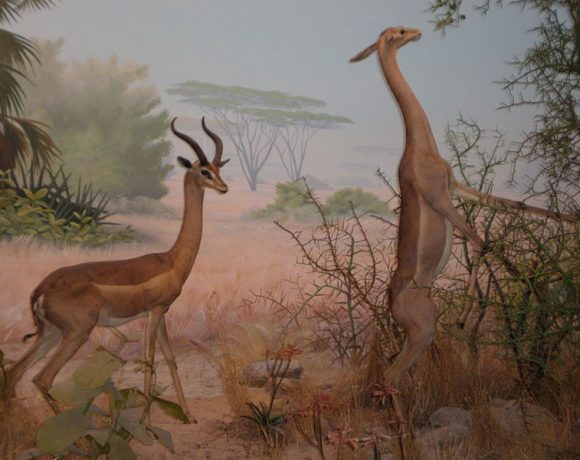 Gerenuks are threatened by habitat loss and fragmentation, mainly. And as the time goes, the destruction we bring to the nature gets worse. That’s why, although their population in the nature is relatively maintained, but if the destruction keeps going on there’s no wonder they will go extinct later.