You are here: Home / The Species / It’s Time to Stop: Why You Shouldn’t Enjoy Dolphin Circus

Dolphins. Highly sociable and intelligent animals enslaved and tortured under the flag of ‘entertainment’. It has been years and Indonesia is still the number one country that continues to run traveling dolphin circus.

Government has made regulations on this matter, and yet the circus keep operating because of exploited loopholes as well as ministry’s unreliable people.

Now, when you watch a dolphin circus, it might not seem like a problem. The dolphins are not harmed, they’re given food every time they do a successful trick, they don’t appear stressed out, and they don’t attack people out of fear or stress–they kiss people when they’re told.

As good as they appear, however, there’s actually more to them than meets the eye. Here’s why dolphin circus is a cruel act, not a fun entertainment, and you shouldn’t enjoy or come to dolphin circus show.

1. The dolphins were caught illegally. Or rather, legally, but it’s shady.

Government has made regulations regarding dolphins. But circus companies found their flaws. Often, their way of getting dolphins are by pretending to save the dolphins. The companies claim that the dolphins were found from the wild, hurting from injuries after being entangled in nets, and needing medical attention.

But they lie. They ask fishermen to catch the dolphins and given up to 2 million rupiahs per catch. Easy money. The lowly fishermen mostly agree because of the sum of money they’d get, even though they feel guilty and horrible while doing it Jakarta Animal Aid Network (JAAN) revealed that dolphin sellers could be reluctant as well.

According to a JAAN staff in Jakarta Globe, “Their coordinator clearly stated on film that he feels horrible about doing this, as the dolphins ‘cry like babies’ and are just like humans, but the circus pays big money for the dolphins, and that is why he captured dolphins for them.”

Surprisingly, Indonesian dolphins are managed by Ministry of Environment and Forestry, as opposed to Ministry of Marine Affairs and Fisheries. And although the fisheries are pressuring the forestry to take actions, they simply don’t give a damn. The forestry even received letter from International Union of Conservation and Nature (IUCN), telling them to stop the practice, but they ignored it.

Founder of JAAN, Femke Den Haas, said, “The only reason they do it is because there is big money involved with the dolphin circus.” She continued, “It’s big money, 800 million rupiah per month per circus.”

Despite an official letter from Forestry Minister, promising to end dolphin circus and a promise from the circus companies to stop the shows, the circus goes on. When the minister was confronted about this, he only stated that he “already prohibited the circus and it was no longer his duty to follow up.”

2. They do tricks because they’re kept unfed and hungry. 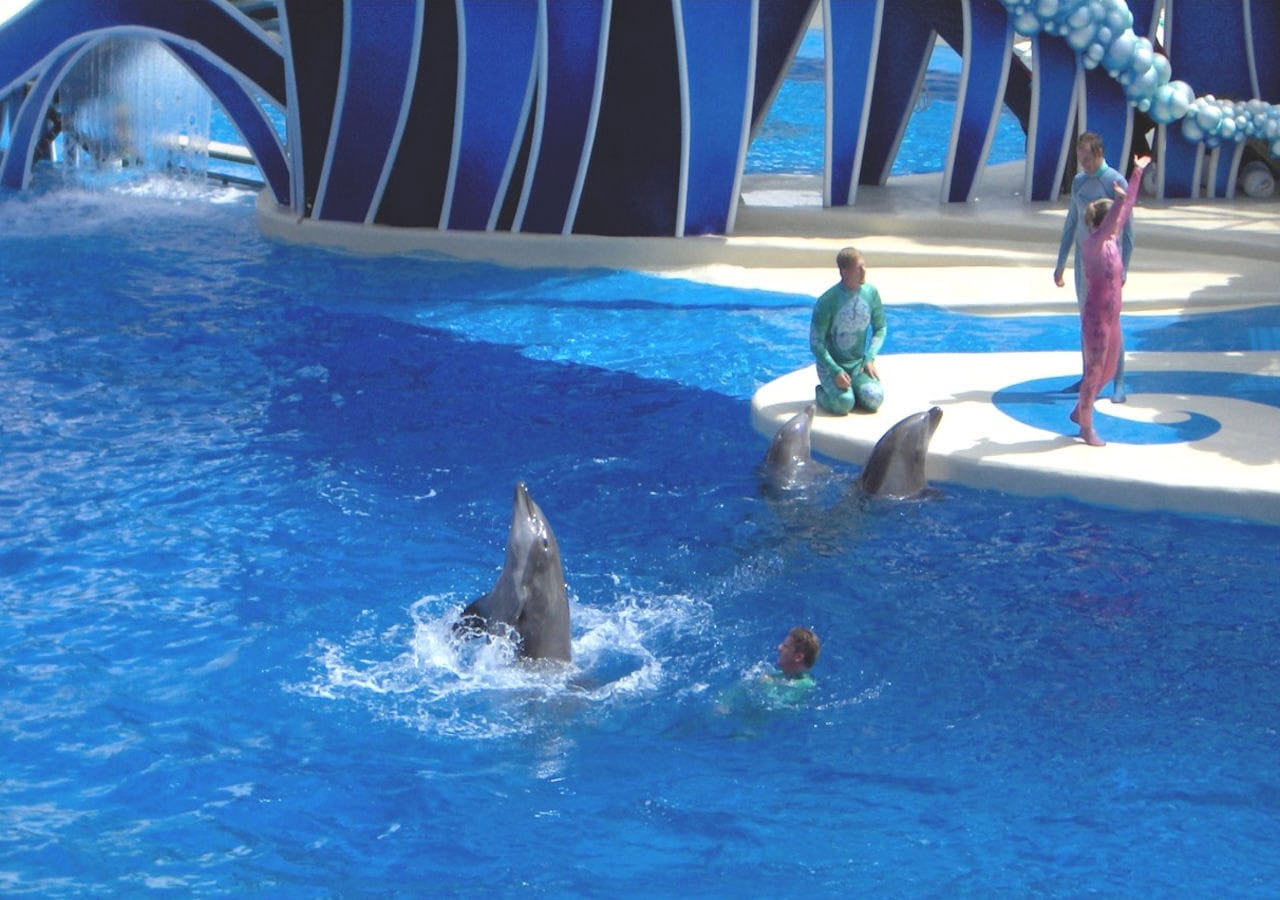 Before the show begins, dolphins are kept hungry and unfed, so they will want to do the tricks and do what the trainer commands. Each successful trick will be rewarded by three or four day-old dead fish. They have to wait for the trainers to get their stomach filled, in contrast to their way of surviving in the wild.

Dolphins usually hunt fish with their group and fresh fish is their main diet. They need to eat fresh fish in order to get water content as a way to keep them well-fed and hydrated (because dolphins don’t drink water). Days-old dead fish hardly contain the nutrition and the water content they need.

The lack of proper diet makes the dolphins unhealthy. Femke Den Haas said, “If you look at any storage room in these facilities, you always find these medicines to treat ulcers and stomach problems, because all these dolphins suffer from stomach problems.” 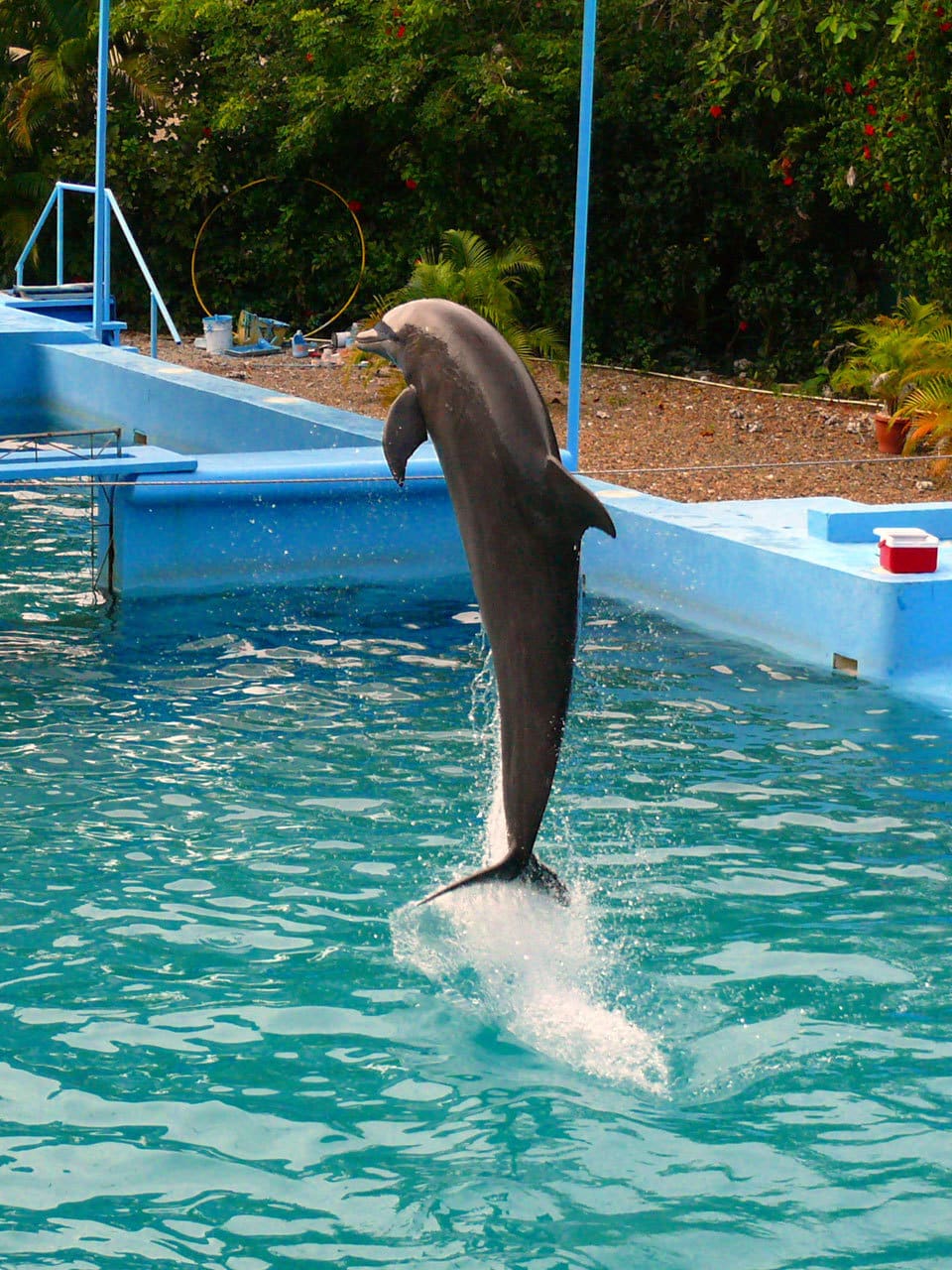 When you first see circus dolphin’s pool, it seems that the pool is big enough for them. The circus is considerate to give the dolphins an accommodating space. Yes, the pool might be about two times bigger than their size, but that doesn’t mean it’s enough for them.

Dolphins’ nature is to swim freely at high speed for around a hundred kilometers per day. Circus pools, which are approximately 5 meters wide–the size of human swimming pool–can be reached within seconds. So the dolphins can only swim around their pools all the time, which is stressful, given the fact that they previously (before confinement) swim freely in their natural habitat, with real seawater.

Yes. The pools don’t have real sea water. The water is artificial and heavily chlorinated. Human eyes can’t stand being in chlorinated water for a long time, right? But dolphins don’t have a choice in the matter.

According to JAAN, a lab research was done in 2012 and proved that the pool “contains eight times as much chlorine levels as officially tolerated by mammals.” Chlorinated artificial seawater, especially with eight times dosage, is fatal to the dolphins. It causes blindness, skin damage, and rapid health declination. Sometimes, the water is full of dolphin feces, causing infection to the dolphins as well.

4. Dolphins are sociable animals, but in circus, they’re alone and lonely. 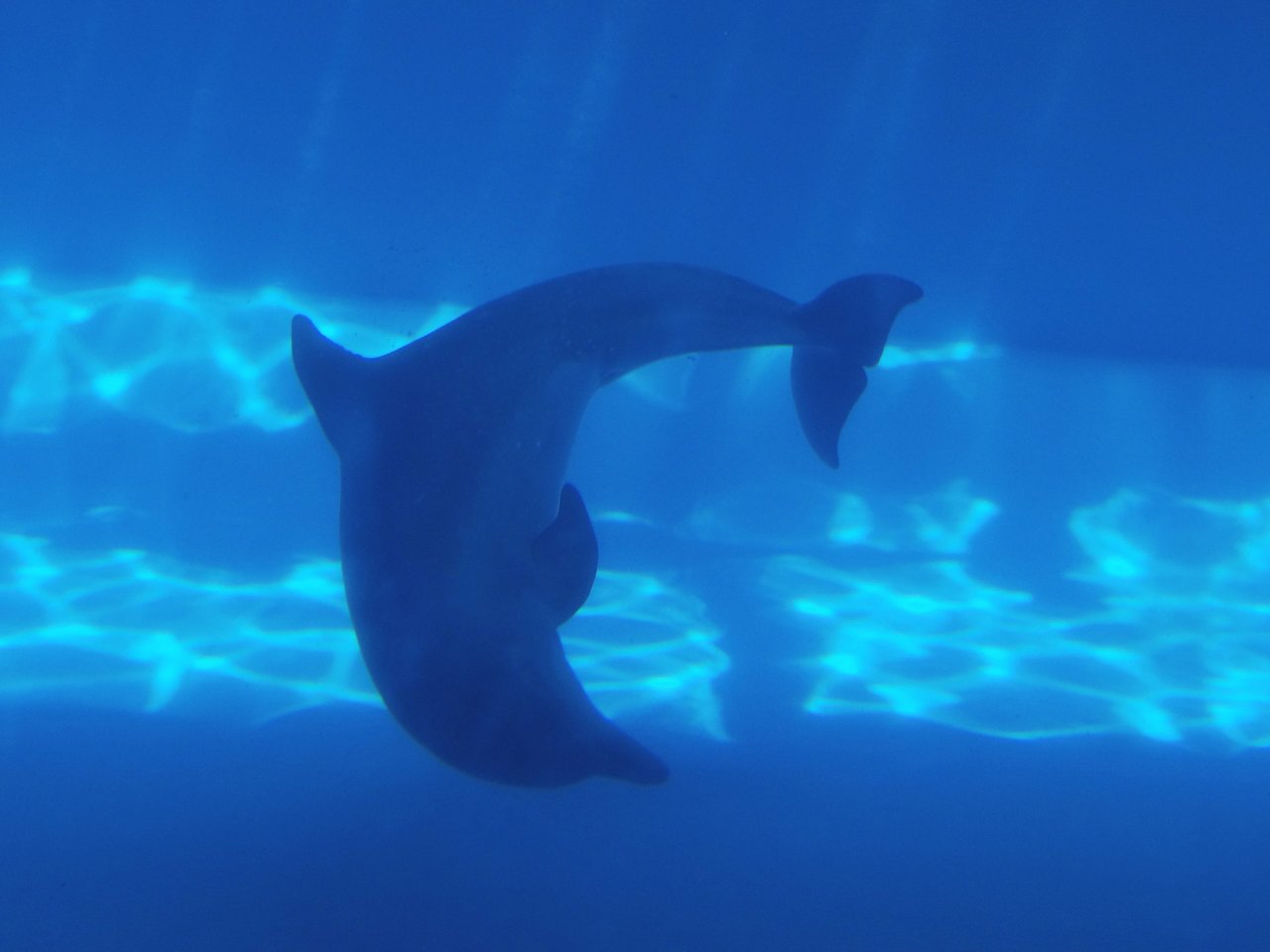 You rarely see single dolphins in the wild. They usually live in pods which consist of over twelve individuals, and those pods can merge up to a thousand dolphins when there are high source of food.

Not only complex and intelligent, dolphins are highly social. However, they are alone, lonely, and not able to communicate even though they have peer in circus.

In their travels, the dolphins are strapped tight then and brought into trucks. They can’t move inside the bumpy, choppy truck ride for up to 30 hours. International travel regulations for dolphins are limited to maximum 6 hours under tight control and observation, but not in Indonesia.

You can’t imagine being strapped and alone inside a tight space and stressful ride for 30 hours, can you? That’s what the dolphins have to face all the time.

The extreme desolation can lead to either aggression or psychological problems like depression, which leads to the next point. 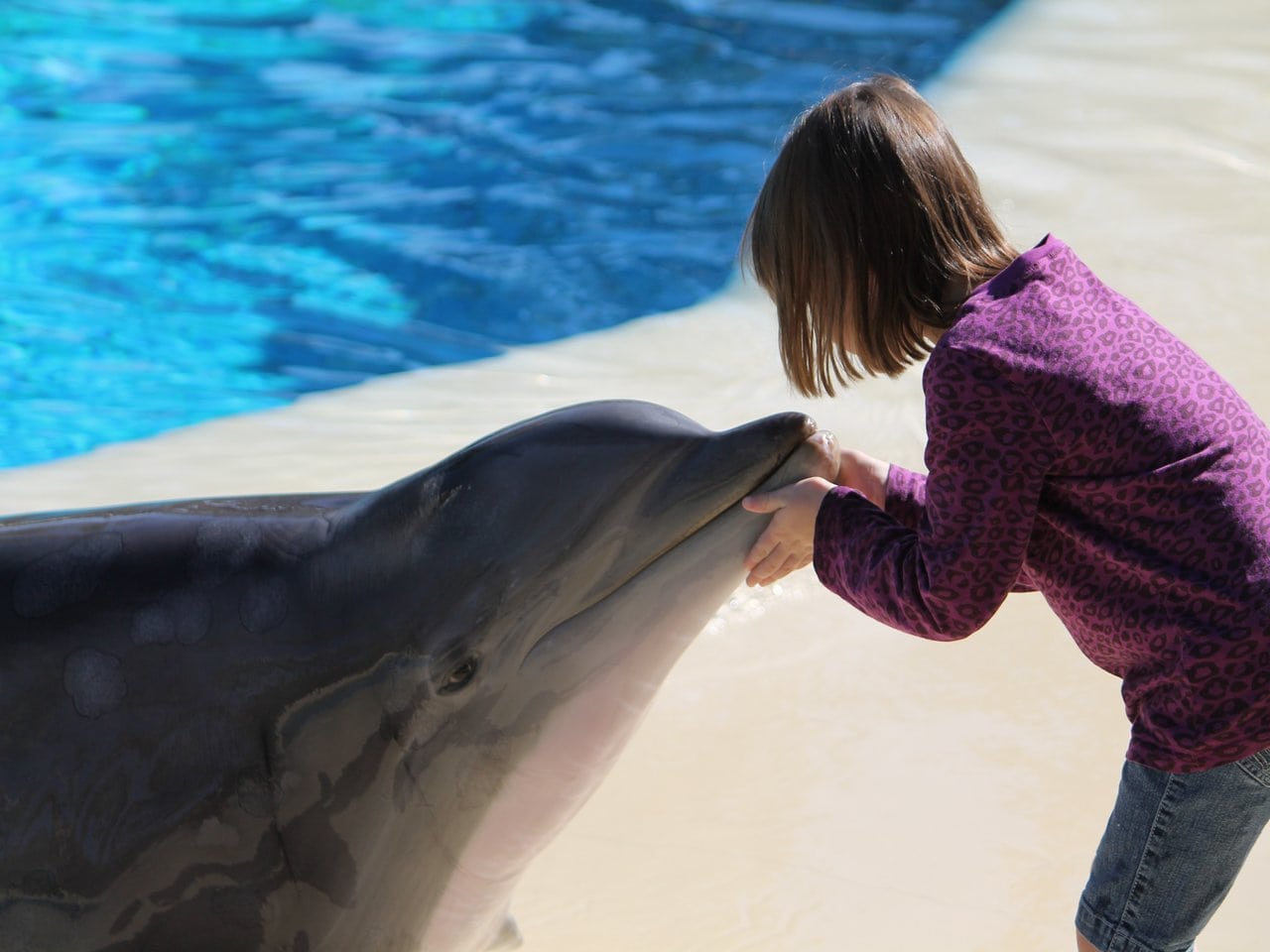 As mentioned before, their loneliness kills them. But putting that aside, the poor animal are forced to spend their time out of water. Usually they get out of water because the trainers command them to kiss some kids or adults, kiss a pregnant lady’s belly, or take photos and selfies. The last one is worse because they’re out of water for a long time, indulging the viewers who want to take pictures.

Dave Neale, director of Animals Asia’s Animal Welfare, explained, “Although they are mammals and breathe air like humans, dolphins have not evolved to spend time out water. The lack of buoyancy can lead to pressure on the lungs, which can cause respiratory problems, and the rapid dehydration can have a negative impact on their skin.”

Neale also said that the dolphins were at risk of being scratched by uneven surfaces. They were also possibly exposed to chemicals that may have been used to clean surfaces as well. With their confinement and this out of water tricks combined, the dolphins are guaranteed to have physical and psychological trauma, which in the end, will effectively kill them.

As a result, circus dolphins die quickly and they are frequently replaced with new ones poached from the wild. And the vicious cycle never ends. 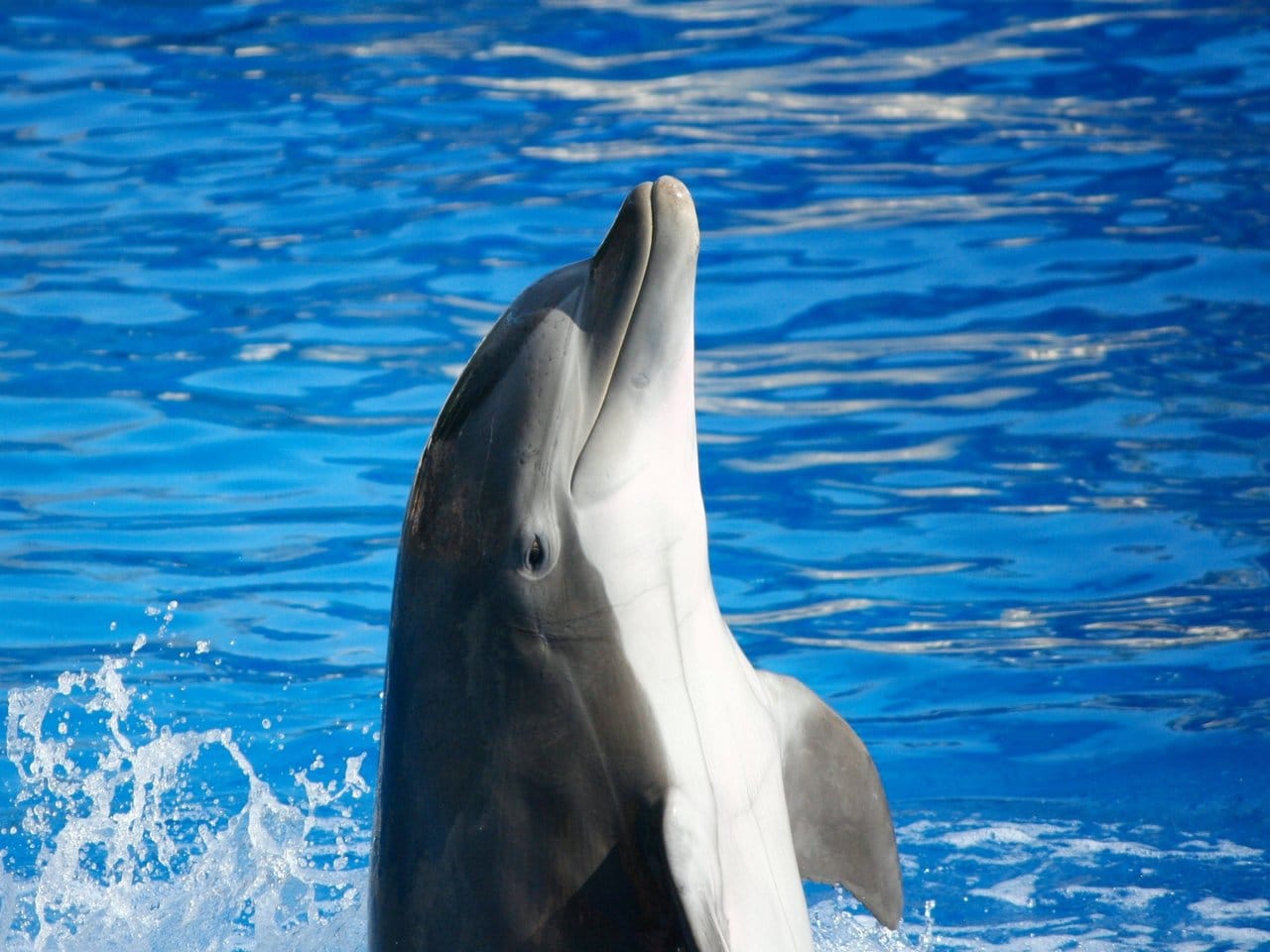 The circus music plays, the trainers command, the crowds cheer. It looks fine, but in reality, it isn’t. Just like whales, dolphins’ ears are sensitive because they can hear very well in water, where sound travels five times faster. Cetaceans (dolphins and whales) can hear iceberg crackling from thousand kilometers away, and the sound of boat and ship engines are considered ear-piercing to them.

Compare that to the loud circus music, clapping, cheering, and shouting in such small space. Most of the times, the trainer commands them by making a loud noise in the water near the dolphins. Imagine the aural pain they have to endure each time they’re forced to perform tricks.

It should be noted that the cemented pool’s sides bounce back the dolphins’ calls like a perplexing, deafening echo. According to JAAN, “It is much like forcing a person to live in a hall of mirrors for the rest of their life – their image always bouncing back with no clear direction in sight.”

Other than that, loud noises are known to stress wild animals. Just take feral cats for example. Whenever they hear loud noise, they’re startled and then run into hiding. These dolphins can’t even escape. They’re confined all the time and they can’t help but take all that aural pain in order to simply survive.

All in all, the circus makes a lot of money from the dolphins’ suffering. Watching dolphin shows means you’re supporting animal cruelty and you’ve contributed to exacerbating the dolphins’ endless suffering.

Government is unreliable when it comes to saving these protected sea mammals. The change starts with you. Stop coming to dolphin shows. If you’ve done that, tell other people to stop and give them the facts. When there’s no money for the industry, then the industry will eventually shut down.

To conclude this article, I’m quoting Dave Neale who said, “It’s hard to imagine a less suitable environment for dolphins. They are separated from their friends and family, forced to do tricks for food and must survive in the tiniest of pools.

Once the show is over, it only gets worse. They are fished out of the water, strapped into a box and loaded onto a plane. Clearly, the last thing being taken into consideration in this situation is the welfare of the animals and the evidence suggests this cruelty is ultimately killing them.”

These Dolphins Miss Us So Much During Coronavirus Lockdown

Thinking of Taking Selfies with Animals? Read This First