For those of you who have been wondering, “Is there a possibility that my cat(s) could be eating shark meat?”

Well, this may or may not shock you, but there is.

According to a new study, published in Frontiers in Marine Science, shark meat can end up in our furbabies’ food. This especially happens on labels or ingredients that just say “fish,” “white fish” or “ocean fish.”

The researchers used DNA barcoding to test 45 different pet food products from Singapore. They discovered that a third of all 144 samples contained DNA from sharks. And yes, even the endangered species were in those samples.

They found that the most common species that end up in our cats’ bowls is the blue shark, followed by the silky shark. Per the International Union for Conservation of Nature (IUCN) the former’s status is near threatened, while the latter is vulnerable.

You may be thinking that this only happens in Asia, since many shark fin news come from here. But, a similar study done in 2019 found that genetic material found from sharks were in both pet food and cosmetics in the United States.

Study authors Ian French and Benjamin J. Wainwright said in a statement, “Given the results of a previous study performed in the U.S., we wanted to see if endangered sharks are also sold in Asian pet food.”

Like mentioned, ingredients and labels state “fish,” “ocean fish,” “white bait,” or “white fish” in order to not reveal the actual content of our cats’ food. According to the study, some list “tuna” or “salmon,” while others did not include fish as an ingredient at all.

The authors wrote, “Sharks were not listed as ingredients on any of the sampled products tested.

“While this is not illegal or a required procedure, we argue that many pet owners and lovers would be alarmed to find out that they are likely contributing to the unsustainable fishing practices that have caused massive declines in global shark populations.”

A study published in the journal Nature stated that shark and ray populations have dropped more than 70% in the last 50 years globally. The main causes are overfishing as well as shark finning.

When I found out about this, of course I freaked out.

I’ve fed cats, mine or strays, for 7 years and occasionally I’d choose the ones with the labels mentioned above. Honestly, I didn’t think much of it, I only thought that those are probably some regular fish byproducts or maybe bycatch (of fish other than shark/ray, whale, and dolphin family).

And then I learned that they contain some ground down sharks. Pretty sure you and other cat owners out there understand how I feel, especially if you also like sharks.

However, it may not be the worst thing that could happen.

The authors stated that even though it sounds horrible, this could also mean that there’s an attempt to avoid waste in the shark fin industry.

“If this is the case, that may be commendable,” said the authors.

And I understand if you think that this doesn’t change a thing. But remember that the common practice of finning is stripping sharks of their fins, then the harvesters toss them back to the sea, leaving them all sink to the bottom unable to swim, dying slowly.

I personally think that practice is heinous, but I also think that if they’d kill the sharks at the moment and use the meat, it’s less horrible.

“We are skeptical that this is the sole reason that sharks end up in pet food. More likely, their presence demonstrates the high fishing pressure to which sharks are increasingly subjected,” the researchers wrote.

Despite the rather ‘positive’ possibility, I think the best scenario that could happen is to not hunt sharks at all.

According to French and Wainwright, better labeling could help reducing shark exploitation in pet food. With it, consumers could make more informed decisions about what they purchase.

“This in turn would benefit shark populations by helping to mitigate unsustainable fishing and resource use incompatible with their continued survival,” the researchers concluded.

In my opinion, the sharks could be in our cats’ food because the commercial fishermen got bycatch. They don’t want to get rid of them due to the value of fins.

Well, maybe this new procedure can reduce that.

New research suggests that if we line and light up fishing nets with green LED lights, we can prevent unwanted marine animals from getting stuck. This, in turn, could save fisheries time and stopping vulnerable animals from dying or getting injured.

Published in Current Biology, the study found that the lighted gillnets didn’t have significant effect on the targeted fish caught. However, they could reduce total biomass of unwanted catch, or bycatch, by 63%.

Moreover, the lights reduced the average time to retrieve and disentangle nets in half. Hence, saving time for fisheries.

Lead author Jesse Senko said, “We were stunned with our findings. We assume that it’s probably some type of warning or deterrent.” 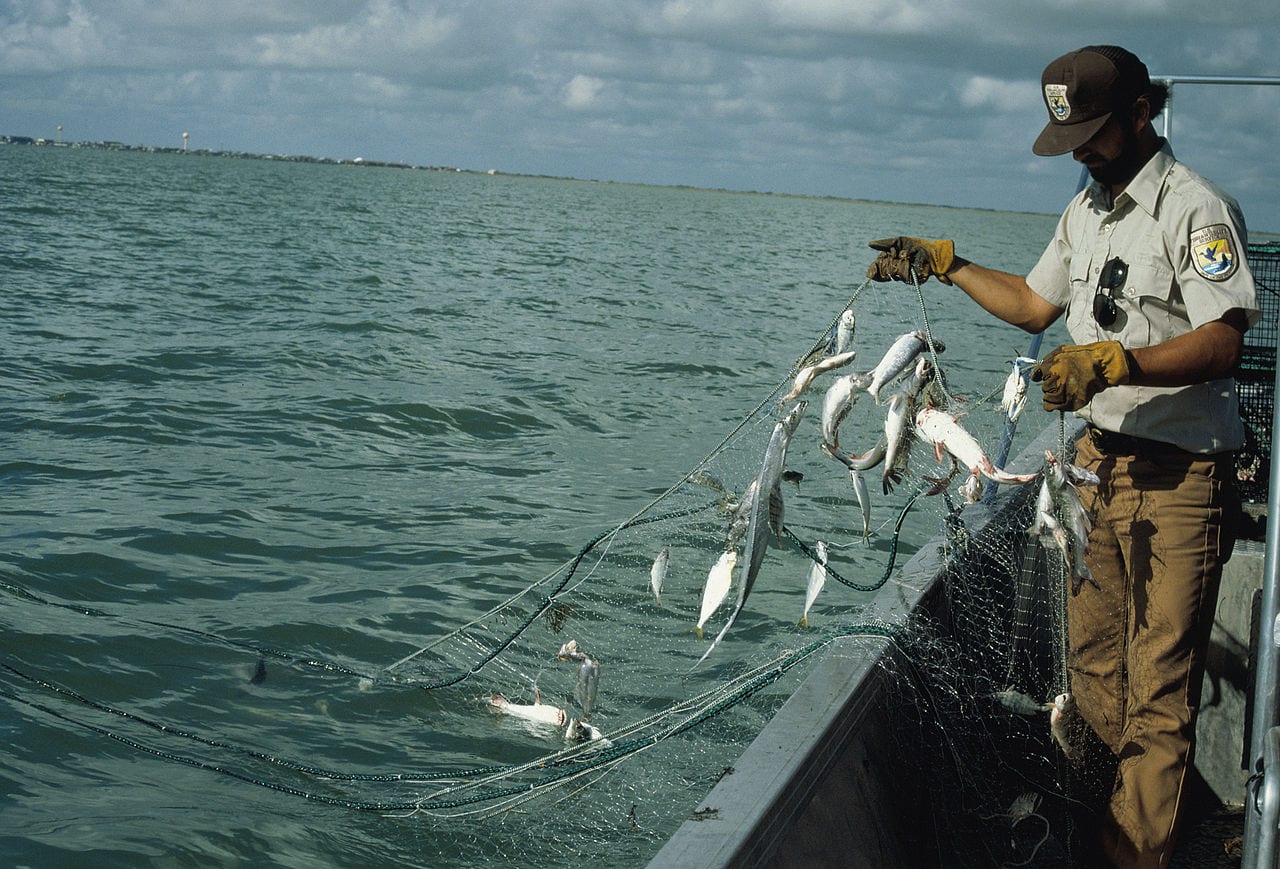 How the nets work

To go on with their experiment, researchers partnered with local fishers operating off the coast of Baja California Sur, Mexico. Then, they attached the LED lights in 10-meter intervals along a gillnet (or a wall of netting that floats vertically in the water).

They powered the lights by batteries that last about three to four weeks. Additionally, the researchers also developed solar-powered lights that can last several years.

Now, when fish swim into gillnets, only their heads can pass through the structure’s holes, not their bodies. Once they get stuck and try to free themselves, the netting would get stuck in their gills, and they become even more entangled.

Therefore, these lights are a win-win solution to both fisheries and marine animals usually caught by the nets.

Coauthor Hoyt Peckham stated, “Gillnets are ubiquitous because they are inexpensive and catch everything that passes them. This work is exciting because it provides a practical solution increasing gillnets’ selectivity and avoiding their bycatch.”

There were no other studies that explored the possibility of saving other vulnerable species or total bycatch with the improved nets. And in most cases, many regulations only favor one side , inconveniencing the other. It was only now that it happened.

“In this particular gillnet fishery, high bycatch of loggerhead turtles resulted in a fishery closure that eliminated the seasonal income of thousands of fishers,” the study states.

Life in the fisheries

Per a study done in 2009, scientists estimated that 40% or 38.5 million tons of annual global marine catch is bycatch. Fishers usually toss back the unwanted marine animals back into the ocean after they’re caught, dead or injured.

But I think if the animals are valuable, they might keep it, and potentially ending up in cats’ food if humans can’t eat them. Of course, this drives more and more species towards vulnerability, even extinction.

Although it may seem insignificant, these LED lighted nets sound promising. Not to mention that they benefit both sides.

Senko said, “We’re always looking for those win-win opportunities. Traditionally, a lot of conservation and management approaches have basically just said, shut them down—shut all gillnet fisheries down.

“We’ve taken basically the opposite approach. We’ve basically said, how can we make this fishing gear more selective?”