You are here: Home / The Species / Fancy Reading About Cute Animals? Find 6 of Them in Australia

However, you must know that not all of them are venomous or dangerous. In fact, Australia is the home of many cute marsupials that you just want to snuggle or pet. Here are some of the cutest ones.

These bunny-like marsupials has survived the desert land of Central Australia. British colonization had made one species of bilby vanished, and now these pointy-eared and long-nosed animals are considered endangered.

As a conservation and raise-awareness effort, a lot of Australians replace traditional rabbit shaped chocolates with bilbies for Easter. Because as you might know, the latter fuzzy animal is actually a pest in this continent.

Probably you’re thinking of Crash Bandicoot when you read this species’ name and you’re not wrong to think the game character is inspired by this animal. In fact, paleontologists have named an extinct bandicoot from the Miocene of Australia after the character, as discovered from a journal of paleontology.

In reality, bandicoots don’t look at all like Crash–their skin/fur are not tan brown and they look more like a rat instead of a dog (I honestly thought the character is a dog, a corgi perhaps). Even though they look like rats, these marsupials are actually closer to rabbits. Probably because they hop like them.

Australia might have the most venomous animals, but the cuter ones have adorable names like this spiny anteater. Now you’re probably already familiar with platypuses, mammals that lay eggs. Echidnas are also like that.

What’s unique about Echidnas are that they’re part porcupine, reptile, marsupial, and also bird. You can see quills covering their bodies, but they have a beak-like snout and they have pouches, typical features of marsupials.

And even though you know Echidnas have menacing sharp spikes around their bodies, you still want to at least pet them. That’s a part of their charms.

Oh, this animal is my second favorite Australian marsupials (the first ones are wombats). I really like these cat-sized kangaroo because they’ve got the happiest faces, and you’ll find a lot of pictures/selfies that feature ‘smiling’ quokkas.

If you want to see a lot of this species, you should go to Rottnest Island. That island has about 10,000 quokkas. Which seems like a large number, but this Australian animal is actually a rare species. The decline of quokkas are partly caused by their sociable nature, making them an easy prey for foxes, cats, and dingoes.

They say that there’s a price for being too nice…

I absolutely adore this animal. The first time I found out about wombats, I couldn’t control myself and I just want to snuggle them all day. I mean, how can you not think that they’re cute? They have stubby bodies and short legs, and they walk like a fat cat. I simply can’t even.

Although they appear chubby, wombats can actually run up to 25 mph over short distances. But again, they look so cute when they’re running. And you should also know their rather adorable defense technique.

When animals like dingo attack a wombat in their burrows (which are just large enough for one), it turns around and uses it backside (meaning its buttocks) as a shield. It’s so adorable isn’t it? Though there is a reason for this. Wombats’ rears are covered with thick and tough skin. Their tails are small too, so predators would have a hard time catching them.

Another thing to love about this animal: their poops are shaped like cubes. This happens as a result of wombats’ long digestive process (about 14 to 18 days) and their intestine walls stretch unevenly as the stool moves through, hence the cube shapes.

Unfortunately, wombats, particularly the bare-nosed ones in Tasmania, are struggling with sarcoptic mange. The mange outbreak has caused 94% decrease of wombat population in that area since the past seven years.

Sarcoptic mange is deadly to wombats because it causes a major loss of body heat, highly increased metabolic rate, detrimental behaviour changes, and alteration of fat composition. Wombats affected with this mange is unable to eat enough to replace energy levels, causing them to die. To make things worse, they don’t have natural immunity to this skin problems.

If you prefer birds to other animals, you’ll love kookaburras. The distinctive nature of this bird is their call that sounds like a human laughter or a monkey (you know, with the ooh ooh ah ah). So now, when you hear laughing sounds but you’re sure there’s nobody around you, that would be the doing of these birds.

Now, even though they look and sound cute or funny, you shouldn’t be deceived by kookaburras’ looks. Also, they’re not only birds of prey, but actually also fierce carnivores. Their diet includes frogs, reptiles, birds, rodents, and even venomous snakes. Such a bad-a type of bird with a silly call. 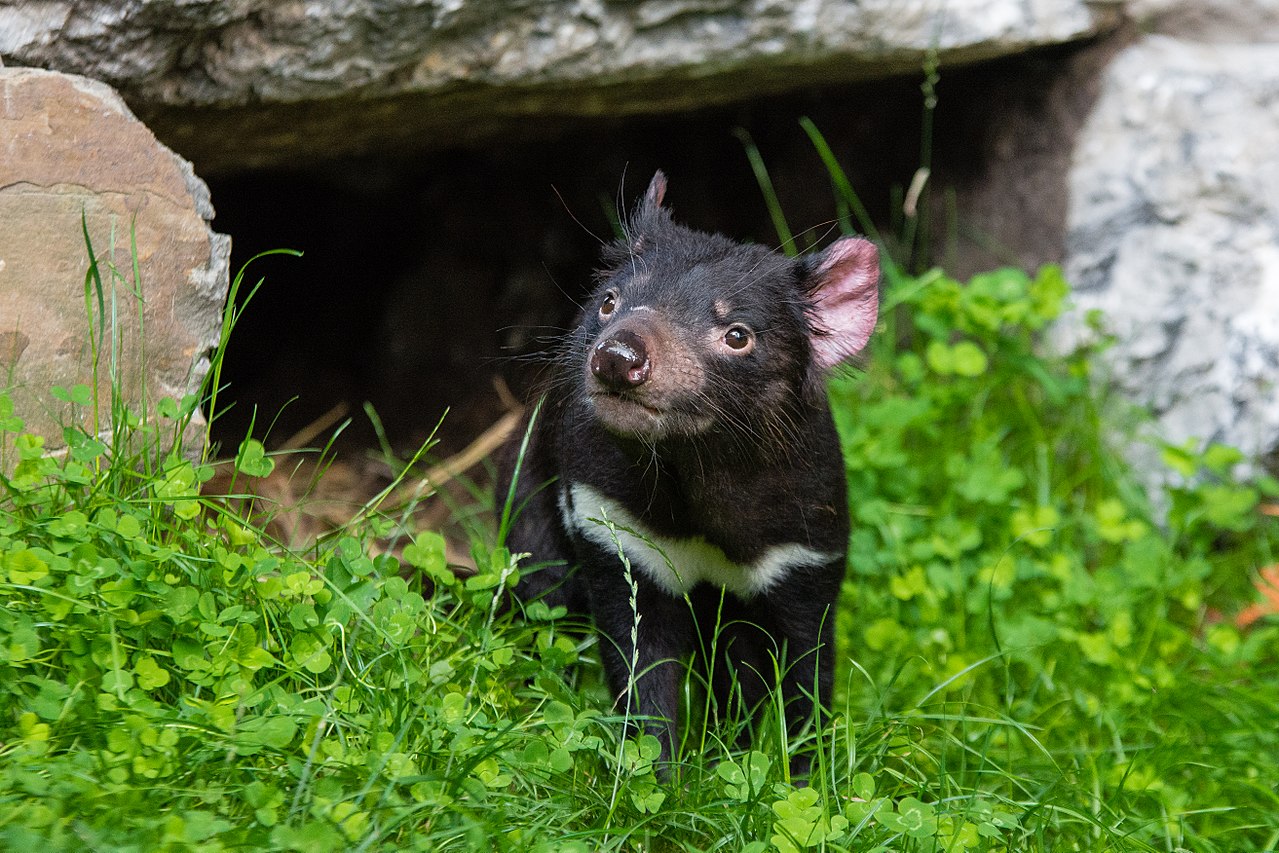 The first look of this animal probably won’t give you the best impression because of the gnarly teeth of this animal. But once you look past that, Tasmanian devils are actually adorable. They may be small animals but they’re actually powerful.

Tasmanian devils have 42 teeth set with powerful jaws, almost similar to hyenas. Which explains why their diet is carnivorous and they have a knack for scavenging. It is said that their bite is similar to the bit of a maned wolf (if you don’t know what maned wolves are, just imagine a fox in the slender body of a greyhound. That’s basically how they look).

Moreover, Tasmanian devils are said to have one of the strongest bites per body mass of any land predator. Their jaws are so strong that they can bite through a metal trap and even a phone.

Tracey Lane, park manager and senior keeper at Wings Wildlife Park said, “We had a fellow one day who dropped his mobile phone over the fence while trying to get a photo. The devils pounced on it and ripped it to shreds. We got it back for him – in lots of little pieces.”

“On another occasion, a lady dropped her iPad while filming and again the Devils dragged it across the grassed enclosure. We got it back intact and she had awesome close-up footage of their teeth and noses as they continued pressing the play button on and off,” she continued.

The last cute marsupial animal in this list is the tree kangaroo. This species looks a bit like koala but slimmer and brown. These kangaroos are endemic to tropical rainforests in the Far North Queensland. And while there are 14 known subspecies of this animal, their population just keeps on declining as a result of hunting and habitat loss.

Which one is the cutest for you? Tell us in the comments below. Don’t forget to check out this article for a related reading!

The 10 Cutest Animals in Australia