You are here: Home / The Species / Cuttlefish: The Chameleon Of The Sea And Master Of Camouflage

If you are amazed by a chameleon’s ability to change the color of its skin to match the surroundings and avoid predators, you might be twice as amazed when you learn about the “chameleon of the sea”. Not only changing the color of its skin, this sea creature is also able to change the texture to better match the surroundings. It is cuttlefish, a marine animal in the order of Sepiida.

This sea creature appears pretty much similar to a squid, but if you look closely you will notice some differences. The first thing most noticeable difference is while a squid has flexible structure inside its body called a ‘pen’, cuttlefish has broader and harder internal shell called the ‘cuttlebone’.

Is that all about the master of camouflage? Of course not. So, what is so unique about this animal that we should learn about the differences between cuttlefish and squid? In this article we are going to talk about it.

Chameleon Of The Sea 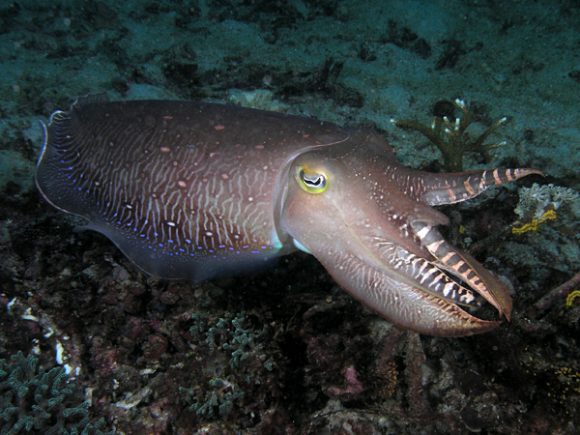 First thing you should know, as mentioned before, is the ability of this animal to match its color to the surroundings. In addition to the camouflaging ability, this animal has developed the method to better hide itself from the predators and the preys.

Not only changing the color, but this animal is able to develop some kind of texture on its skin to better hide itself. Amazingly, he is not only able to camouflage stationary in just one spot. To do it, instead of changing to specific color of a place, it can also change the color of its skin to match other things we can find in the area.

Instead of matching its color to the sand, a cuttlefish may also match its color and texture to disguise its presence as a sea rock. This way, the predators and the preys will not be able to notice the presence of this animal although some changes happen to the sand’s surface. Amazingly, despite its impressive ability to match the color and texture of its skin with the surroundings, cuttlefish is colorblind!

What’s remarkable of this ability is that the marine invertebrate doesn’t need much time to do so. Cuttlefish can change its color and texture almost instantly, and the coloration doesn’t have to be static. It can change color in rapid patterns to make it look like the patterns are rolling over its body. 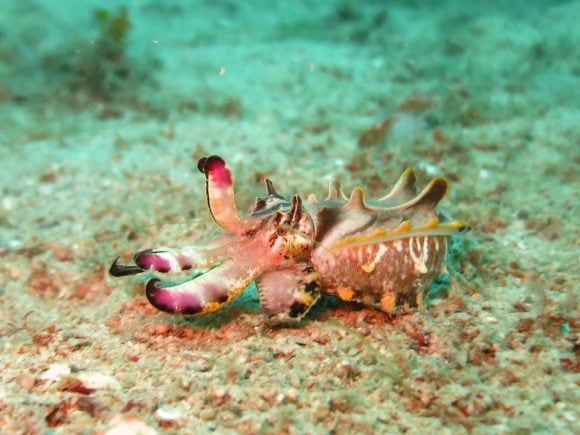 While the predators and the preys might find it hard to find and detect the presence of cuttlefish with their eyes, they might find it easier to find them with their hearings. The reason is simple, it is so hard to hide the cuttlefish’s heartbeats.

Why is it so easy to find the creature from the heartbeats? The answer is simple, because a single cuttlefish has three hearts instead of just one. If there were vampire cuttlefishes, you might have to prepare at least three stakes for each.

Having equipped with three hearts, each of them is very important to the sea mollusk. Two hearts are used to pump blood to the fish gills, where the blood is then oxygenated, while the other one is used to circulate oxygenated blood to the entire body.

Unlike other creatures living in sea or land, the blood of cuttlefish is not red. The red color of blood is given by the iron contained in it. While in the blood of this animal, instead of iron, the blood contains copper that gives an unusual shade of green-blue. 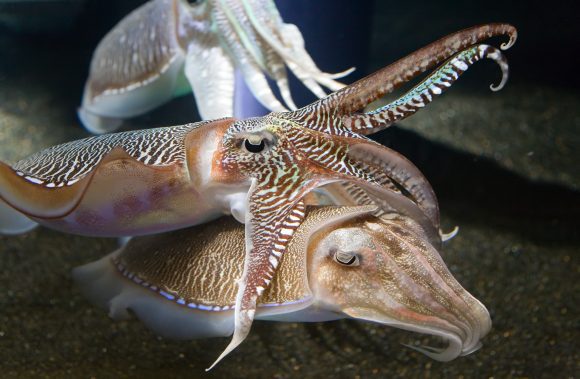 Like mentioned before, detecting the presence of a cuttlefish while it is disguising itself might be hard. But it only applies to other species, not for other this creature because this animal has impressive vision, even if they live underwater.

The fact is, this animal is a kind of cannibal. Without hesitation they hunt down and eat other smaller ones. And this cannibalism is not possible to happen without the help of incredible eyesight to differentiate and detect the camouflaging smaller cuttlefishes.

“It can see well in low light and can also detect polarized light, enhancing its perception of contrast. While we humans reshape our lenses in order to focus on specific objects, the cuttlefish moves its lenses by reshaping its entire eye,” according to an article by Public Broadcasting Service.

The ‘reshaping’ part is not a lie, and apparently the shape of a cuttlefish’s eyes is very unique. Unlike other animals that mostly have oval-shaped or round-shaped pupil, the pupil of this animal is W-shaped. The unique shape helps the animal to control the intensity of light entering the eye.

They are also able to zoom in the images captured by their eyes to see objects far away in detail. “The cuttlefish’s eyes are very large in proportion to its body and may increase image magnification upon the retina,” as explained in an article in Public Broadcasting Service. 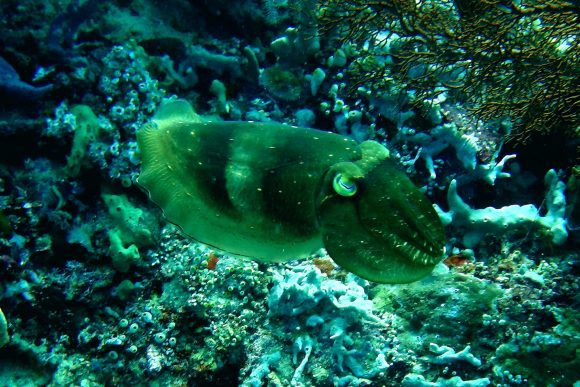 This animal can control its buoyancy manually, unlike other marine invertebrates. They can do it by manually adjusting the level of gas and water in the chamber of their cuttlebones. By doing this, they can hunt smaller preys in the ocean floor and later swim up to the surface to travel further.

Not only that, they can also use some strategic movements to mate. Male ones usually disguise as female to get past competing males. With this trick, the male cuttlefish can get closer to the female one and have bigger chance to mate. What a tricky little mollusk.

Another evidence of intelligence has been discovered by a group of scientists from Royal Society. Testing 1-month-old cuttlefish by giving it two boxes, one box containing 1 more shrimp to the other, the young cuttlefish could easily tell the difference to choose the ones with extra shrimp. Smart little mollusk.