Plastic has been our biggest concern. It is estimated that 150.000.000 tons of plastic is currently in the ocean where it can harms ecosystems and marine life and us at the end

Envigreen Biotech India has come up with organic biodegradable plastic bags which are made from starch. We may not believe but it’s true.

Ashwath Hegde, a Mangalore-born but now Qatar-based NRI entrepreneur is the man behind Envigreen. This idea came to his mind in 2012 when the Government put a ban on the use of plastic.

This plastic manufacturing process comprises of creating bags using 12 ingredients – potatoes, tapioca, corn, natural starch, vegetable oil, banana, and flower oil. These ingredients are liquefied and taken through a six-step process. This process, does not use any chemicals and even the paints used to print on the bags are all natural and organic.

The Karnataka State Pollution Control Board (KSPCB), which has approved the use of these bags, conducted several tests to ensure there were no plastic elements in them. The tests included placing a hot iron on a small piece of EnviGreen sheet. The sheet neither melts nor sticks to the hot iron surface. The bags also don’t melt, drip, or release any toxic fumes when burnt, unlike conventional plastic bags. They have been tested by the Central Institute of Plastic Engineering and Sriram Institute for Industrial Research and have been given green signal as well

When discarded it takes 180 days to degrade naturally So users can throw them away without worrying about harming the environment, and if placed in a glass of normal water it dissolves in one day. In boiling water, it dissolves in 15 seconds. The best part of it is it has no impact on animals when ingested.To prove it edibility  Ashwath Hegde himself ate the bag after dissolving it in water.

“To give you a rough idea, an EnviGreen bag measuring 13 inches by 16 inches costs Rs. 3, while a plastic bag with the same dimensions will cost Rs. 2”.

AVANI Cassava Root Plastic Bag – You can even drink it

Founded by Kevin Kumala from Bali, The Avani Eco has come up with a line of fully biodegradable food products, including takeaway containers, cutlery, straws, and coffee cups, rain ponchos

They biodegrade fully within 3 to 6 months, depending on soil conditions, converting naturally into carbon dioxide and biomass, with no toxic residue. This process can be hurried by dissolving in hot water, softening in cold water, and burning to leave a small amount of ash

The Avani plastic bag is also harmless when eaten by terrestial and marine animal. Kevin proof it by drinking a dissolved cassava plastic bag 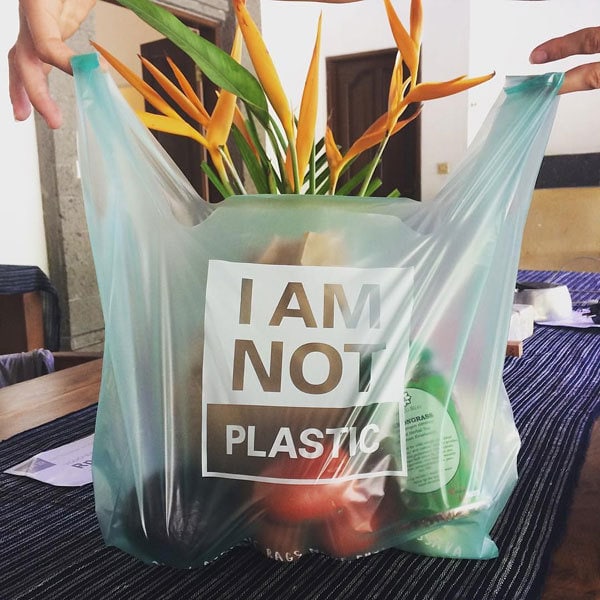 Due to its unique composition it is widely considered in the world as one of the lowest cost for bio-plastic.

The cost of this bioplastic is 2 – 3 cent more than a regular plastic bag. But i think it is a small price to pay to prevent further damage by plastic epidemic

Hopefully both invention can be distributed worldwide , so we can use it to stop plastic pollution before it kill us