You are here: Home / The Species / Meet Takin, The Most Badass Animal From The Height Of Himalaya

If you ever visit Himalaya and take a walk in the freezing morning, you might find a very strange animal roaming the highlands. Its name is takin, and it appears just like the fusion of cow, goat, bear, antelope, capibara, pig, and muskox.

Because of the strange appearance, takin is considered as the most notorious animal in Himalaya. In other words, this is the most badass animal in the highlands from the appearance alone, and you will admit it once you get to see it.

But its appearance is not the only thing that makes this animal a badass. You cannot underestimate this animal, because takin is not as weak as you might think. In addition to that, takin is also believed to be a legendary animal by local people.

Let’s talk about this badass animal, and you will see why takin is the coolest animal in Himalaya. 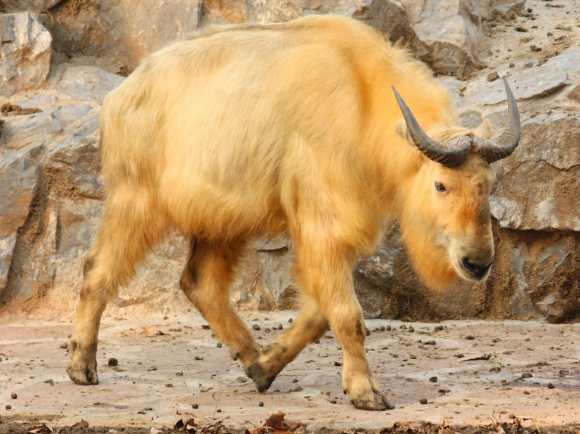 First, let’s talk about its appearance. Takin, just like mentioned above, appears to be a very peculiar animal like the fusion of many animals. But takin is no alien, since it is a real animal that can be taxonomically sequenced.

When we are talking about what kind of animal resembles takin more between those mentioned in the list, you might think that takin appears like a hybrid of cow and a giant capibara. But actually, takin is no relative to those two animals.

Instead, the closest family of takin is sheep. See? How can such kind of animal be the relative of sheep? Hard to believe but that’s the fact. Because of the appearance, this animal is also called as goat-antelope, gnu goat, or cattle chamois.

The distinguishable feature of this animal is the short horn on its head and its legendary goldish fur. The fur, or coat, is usually around 3 cm long in the flank during summer, to 24 cm on underside of head during cold winter.

The Charisma Of Takin 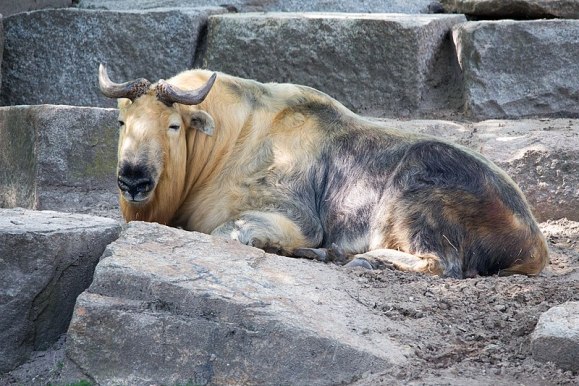 Now let’s talk about how its appearance can give the badass vibe. By ratio, the length and the height of this animal will give a brawny look to the animal. Accompanied with black to goldish coat and permanent death stare, not so many animals can stand the aura of a takin.

In fact, the only natural enemy of this animal is huge predators, such as Asiatic black bear, leopard, tigers, wolves, and dholes. No other non-predator animals are able to fight with it and even the adult animal has no confirmed natural predator.

Snow leopards are the only natural predators confirmed to prey on younger takins, but once they reach adulthood they would likely be exempted. Not only because of its size and fighting spirit, takin is a relatively tricky prey.

They can hop swiftly from one rock to another to avoid predators, despite the size of their body. In addition to that, takin is known to have a battle roar that will intimidate any enemy who hear it. The battle roar is somewhat similar to a loud cough.

Not only to get rid of predators, the cough is also a warning sign for its herd. Once a takin in the herd senses danger, it will ‘cough’ and the herd will run for cover. But most of the time, the cough alone is enough to make dangers go away.

There is a legend from 15th century about the origin of this animal, and it strengthen the badass sense of takin. This legend told that when Lama Drukpa Kunley (‘The Divine Madman’) visited Bhutan, he was asked to demonstrate his power.

The Divine Madman asked the hundreds of people gathering around him to bring him an entire cow and a whole goat. He said he was hungry, and after the people brought him what he asked, he devoured those entire meal leaving only the bones.

Lama Drukpa Kunley then picked the skull of the goat, and placed it onto the skeleton of the cow. He snapped his fingers afterward, while commanding the lifeless bones to “rise-up and graze on the mountainside”.

A beast came up alive from the bones and obeyed what the Divine Madman said to it. It immediately ran off to the mountainside and feed there. The animated beast is known as dong gyem tsey, or how the Bhutanese call takin.

The folklore came from Bhutan, and that’s how Bhutanese legend explain why takin has goat-like head but the body is so big like a cow. Today, the animal is claimed as the nation animal of Bhutan, the most peaceful country in the world. 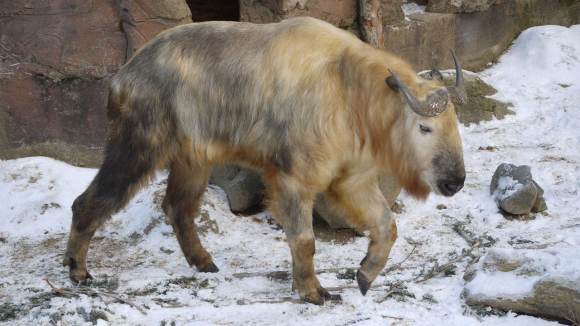 As mentioned above that this animal has no natural enemy (or only a few, actually) and can easily survive in the mountainside of Himalaya highlands. However, don’t you know that takin is considered as a vulnerable animal nowadays?

Yes, against all odds, the number of takin alive in the wild nowadays keeps on going lower and lower. Poaching and habitat loss caused by human activities are the two most responsible causes for this animal’s decrease in population.

Even though hunting for takin is illegal in China, India, and Bhutan, but the fact that takin can also be found in Myanmar become the pothole. In Myanmar, the animal is hunted in the wild for money, resulting in the decrease of its population.

Their meat, skin, and horns are commodities that even nowadays can be found in illegal markets. A survey found that takin’s body parts were sold illegally in Myanmar. Other three surveys conducted in 1999-2006 in the Tachilek market discovered a total of 89 sets of horns were being sold.

See, even the badass animal is vulnerable against human’s greed. This is another proof that this earth needs our help. If we cannot do something to fix it, at least just stop hurting it even more.

Reducing Meat is Good, but Researchers Say It Shouldn’t be the Only Solution

Microplastic Found In Everest Summit Proves That It Is Everywhere