You are here: Home / The Species / Orangutans Are Incredibly ‘Humane’! Here Are The Proofs

Orangutan is said to be one of our closest living relatives, as both they and us are primates. No wonder, many researchers are interested to study the primate which in many cases showing human-like behaviors.

The brown-furred primate mostly found in Southeast Asia is also said to belong to the most intelligent primates in the world. And because of that, researchers are also trying to ‘communicate’ with them and teach them human language.

But how close is our relationship with them, actually? How ‘humane’ can they be? This is the topic that researchers are studying nowadays. And some discoveries showed that orangutans are becoming more ‘human’ in recent days.

Let’s talk about how this human’s close relative ‘behaves’ in this article. 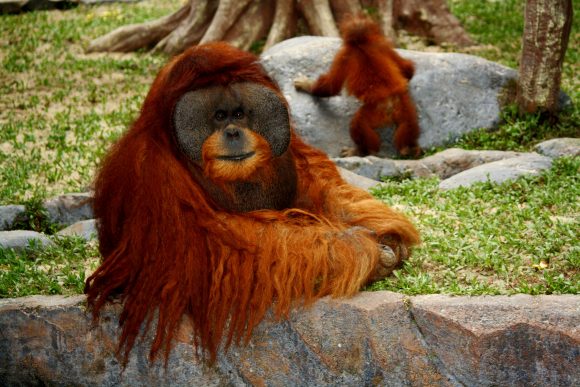 Many people know that genetically, chimpanzees are human’s closest relatives. In fact, human and chimpanzees are 96% the same, genetically tested. That 4% differences became the reason why we are now living in residences while they are staying in the forest.

But in physical traits, somehow we look completely different with chimpanzees and more similar to orangutans. We are not talking about the length of their arms and bushiness of their hair, but we are talking about specific physical features.

“A hole in the roof of the mouth that was supposedly unique to humans is also present in orangs (orangutans). Humans and orangs have the widest-separated mammary glands, and they grow the longest hair,” said Jeffrey Schwartz, of the University of Pittsburgh in Pennsylvania.

In addition, while other primates’ hair from the top of their head to the tip of their toes usually have similar characteristics, but orangutan hair is different. Just like us, orangutans show evidences of having two kinds of hair, body hair and head hair.

“Humans and orangs actually have a hairline, in contrast to virtually all primates, where the hair comes down to the top of the eyes,” said Schwartz. Based on those physical traits similarities, the researchers concluded that orangutans could have been the ‘human’ ones in different primate family. 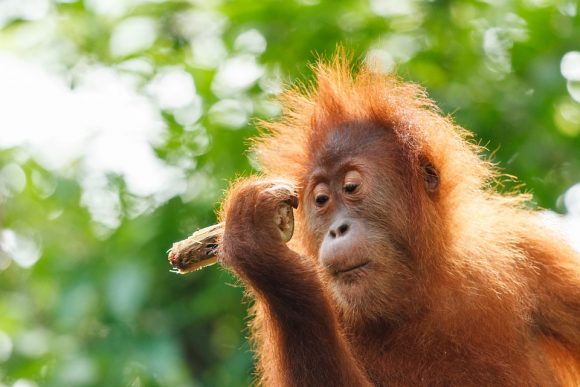 Researchers have said that although genetically we are closer to chimpanzees, but in physical traits, orangutans show more similarities to us. But that’s just a smaller part of our similarities with this primate. They are also ‘hormonaly’ similar to us.

In an interview with National Geographic, Biological anthropologist Cheryl Knott said that the discoveries that she made while studying orangutan in Indonesia’s Gunung Palung National Park made her think that orangutans are more ‘human’ than we have thought.

In example, how female orangutan hormonal works respond to the environment is almost similar to how women hormonal works. This case is not found in our other ‘close relative’, female chimpanzees.

When female orangutans lose weight because food is scarce, they show decreasing hormonal level. In this case, they are more difficult to get pregnant. “This helps explain why they only give birth once every six to nine years, the longest interbirth interval of any mammal!” said Schwartz in the interview.

In addition, younger orangutan males are able to show sexual preference. They tend to prefer older and more experienced females rather than younger and inexperienced ones. It is pretty much similar to how some of our male teenagers having crush on older women. That’s how intriguing an orangutan is. 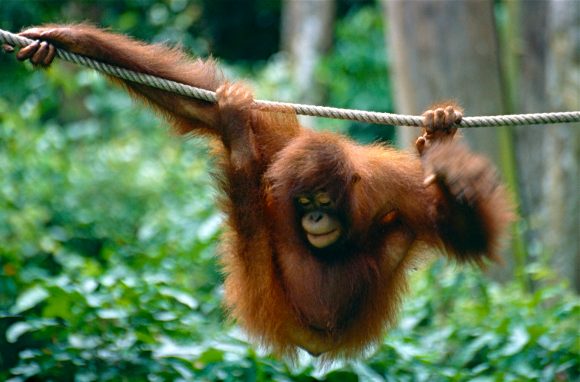 Another prove that orangutans are more ‘human’ than we have thought is their ability to copy our daily chores. In example, in Borneo island of Kaja, there is an orangutan that learns to find food by fishing just like human.

Gerd Schuster, co-author of Thinkers of the Jungle: The Orangutan Report wrote: “A male orangutan, clinging precariously to overhanging branches, flails the water with a pole, trying desperately to spear a passing fish.”

Even though the orangutan didn’t succeed to catch wildly swimming fish, but he then additionally learned that catching fish already trapped in locals’ fishing lines is easier and more doable. Fishing is a complex action that requires patience, techniques, and many other aspects. Thus, for an orangutan to be able to accomplish such kind of ability is a thing that we should appreciate.

That was not the only case an orangutan showing incredible learning and practicing ability to copy human activities. Another orangutan in Tama Zoological Park in Tokyo surprisingly showed intelligent action by wiping its face using washcloth.

Not only its face, but most of its upper body parts were also washed. Afterward, this orangutan cleaned up water droplets produced by the wet cloth too. Even though the reason for this action might not be personal hygiene, but it showed signs of intelligence. 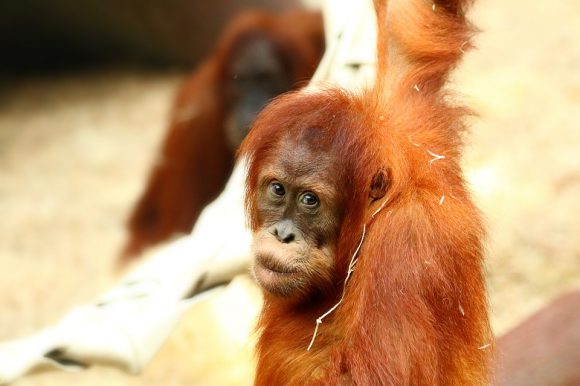 Among the things mentioned above, there is one thing stands out above the others. It is their ability to cope with human actions, especially modernization near the place they live and spend most of their time.

The presence of human is not a new thing for orangutans, since both of us has already coexisted in this planet for more than 70,000 years. In the beginning, there wasn’t many humans and the humans were not this destructive to nature.

But modern days are different from what it used to be. With more ‘technologies’, we are destroying the nature into its current condition, and orangutans are able to cope with this newer condition of nature.

In example, in places where food is getting scarce, orangutans can adapt their lifestyle. Instead of relying entirely on fresh ripe fruit, modern orangutans may survive by eating alternatives like tree bark or leaves.

Not only that, this animal can also live in areas outside pristine forest. In trees around plantation areas and farmlands, their presence can still be spotted. Sadly, farmers tend to shoo them away at any cost, sometimes even by killing this magnificent creature.

Not many animals can take this big leap to adapt with modern world. Had those farmers realized that this creature has fought hard to cope with ‘modern world’, and sacrifice their comfort zone, maybe conservation work for orangutan might become easier.