You are here: Home / Eureka Green / Researchers Are Developing Jet Fuel from Sunlight and Air

Have you ever wondered why the airplane tickets cost so expensive? One of the reasons is because the fuel used by airplane is also expensive. We just cannot create something expensive like jet fuel out of thin air, right? Or can we?

We have to take a look at the research done by researchers at sixth best university in the world, ETH Zurich, to find out the answer. Even though the answer is still no by default, but if you put some contexts (like sunlight and carbon dioxide) the answer might become yes.

What actually are we talking about? Well, this is an innovation that cannot be missed because this can be the part of our cleaner future. We are talking about how the researchers are able to create jet fuel from only sunlight and the air.

Want to know more about this innovation? Follow through.

What we are going to talk about is almost similar to magic. The only difference is, this thing is actual science from researchers at ETH Zurich. The researchers literally developed a unit that can capture air and turn it into fuel that can be used for airplane.

The fuel produced by this process does not add more carbon dioxide to the air, because it releases the exact same amount of carbon dioxide as absorbed during the production process.  Thus, we can say that this fuel is greener than conventional airplane fuel.

This study has been carried by a group of researchers led by Prof. Aldo Steinfeld of Renewable Energy Sources at ETH Zurich. Steinfeld and his team have been operating this machine on top of the university’s Machine Laboratory building for over than two years.

“This plant successfully demonstrates the technical feasibility of the entire thermochemical process for converting sunlight and ambient air into drop-in fuels,” he said. “The system operates stably under real-world solar conditions and provides a unique platform for further research and development.”

How Does It Work?

While one reactor is working with the sunlight, the other reactor is performing oxidation with the same ingredients which is water and carbon dioxide. This way, the two reactors can work in parallel and maximizes the output.

“While one reactor performs the reduction with solar energy, the second reactor is performing the oxidation with water and CO2.  We apply both temperature and pressure swings to maximize the oxygen exchange capacity of cerium oxide, and thereby the fuel yield per cycle,” said Prof. Steinfeld.

The final step includes processing the carbon monoxide and hydrogen harvested from previous actions with commercial catalyst and turns them into methanol. During this process, the researchers can also turn the synthetic natural gas mixture (syngas) into hydrocarbon fuels like kerosene. 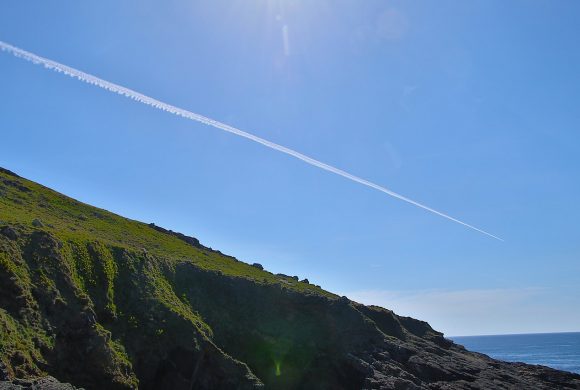 The fuel produced from the process is very high quality that it can be used to fuel airplane. So, will this invention become the future of jet fuel? Well, that’s a question that should be answered with even further research.

There are several reasons for that, including the advancement of technology and classic problems with mass production. “Direct air capture is in the early commercial phase, and still undergoing a lot of rapid technology transitions,” said John Cirucci chemical engineer at Arizona State University.

“The most innovative technological part of what’s described in this study is the solar thermal chemical process,” Cirucci continued. He also said that this very part is the one that has the biggest potentials to be improved for the future.

On the other hand, the problem with mass production is always to keep up with the demand for the product. The refinery unit is currently able to produce 32 milliliters of methanol in seven hour of being active. That’s still not enough fuel to support a one-hour flight, and we are flying more often nowadays.

“While other sectors are making deep reductions, are stabilizing or plateauing their emissions, aviation emissions are growing at an exponential rate, as more people are flying more often,” said senior researcher at the International Council on Clean Transportation, Nikita Pavlenko.

So, using this innovation to produce jet fuel for commercial flight may not happen in the short future.  But this innovation shows that there is an option to fossil fuel, which is free, clean, and produces high quality output.

This invention of carbon zero fuel is not only amazing on how we can create fuel out of thin air, but also on how we actually have a lot of alternatives to fossil fuel. The fact that the fuel produced by this process is pure enough to be used for aviation industry is also amazing.

For long, we have found it difficult to tackle carbon emission in aviation industry because there is basically no alternative to the fossil fuel version of the fuel. However, this innovation proved it wrong. The only thing that we need to do in the future is support such kind of innovation.

One of the methods to make this innovation supported is by developing a quota system for airline industry to use renewable fuels, including this solar kerosene in the future. “This would start out small, such as 0.1%,” said Steinfeld.

“A lot of aviation emissions are driven by a small, wealthier group of people who fly quite frequently. Aviation is one of the sectors that is best equipped to pay for its own technology changes and emission reductions,” said Nikita Pavlenko

Based on the researchers’ calculations, the world needs around 414 billion liters of kerosene per year. And to get that, we need to build solar plants that cover around 45,000 kilometers square. Sounds huge, but that’s just around 0.5% of Sahara Desert, in where the solar plants can function under optimal sunlight.