You are here: Home / The Species / Try To Learn From Honey Badgers, The Most Fearless Creature

There is a creature in this world that just doesn’t care with anything and fears almost nothing. This creature is even called the most fearless creature in the world based on Guinness Book Of Record. Is that lion? No. Is it the tiger? Not either.

This creature is far smaller than those big cats, but if it has to face those fierce creatures, it might not back off and bravely fight them. It is the honey badger (Mellivora capensis), or also known as ratel. This animal is native to Africa, Southwest Asia, and India.

When you feel like the world is against you, and you are breaking down, you might need some motivation from this animal to go on. Living in a harsh area, honey badgers never think twice to fight for foods. That’s why this animal mostly can survive anywhere on earth, because of its bravery in survival.

Here, we give you an insight about the bravery of this animal (and how it doesn’t really care of almost anything but foods), and then let’s look at the features of this animal that made it so brave. 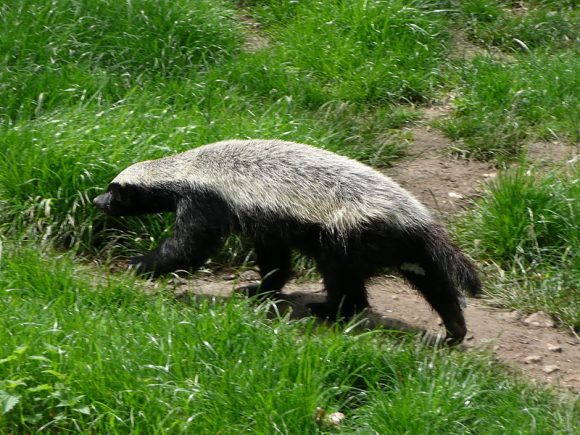 One of the reasons why honey badgers do not fear anything is because of their very thick skin. The skin is about ¼ inches thick and evidences have showed that their skin is impenetrable by traditionally made arrows and spears.

Not only that, the skin is able to take a full blow from swords and machetes without any serious scratches. That’s why the only option for people to get rid of this animal is not by trying to kill it, but just by scaring it off, mostly with fire.

Since even sharp steels cannot penetrate the thick skin of honey badgers, in their survivability in the wild it has more practical benefit. Most predators, even the big ones, usually rely on their claws and teeth to attack. While those weapons might not be as sharp as human-made weapons.

That’s why like we told you before, when they face the big cats such as lions and tigers, they might not back off and instead just fight them. Even in some documentaries, the animal was seen to chase off leopards coming too close to its prey.

And for your information, the skin is also thick enough to protect them from cobra bites and bee stings. That’s why, honey badgers just give little to no care to those venomous animals and even just hunt them down for snacks.

This animal is known to predate on King Cobra and Puff Adders, which are heavily venomous. But the venoms of those animals seem like doesn’t give any noteworthy effects to honey badgers, if they are able to penetrate the thick skin.

Even scientists are still wondering how this animal can resists the venom of those dangerous snakes. When those snakes meet honey badgers, the only victim in the meeting would be the snakes, since honey badgers used to consume them.

The only time the snakes can save their souls from honey badgers is by biting as hard as possible, that they can penetrate the skin and inject the venom. However, the only effect the honey badgers will get is just being knocked off for several hours, and no further damage.

Thus, honey badgers usually show no fear against any venomous animals in commons, whether it would be snakes, bees, and other insects. Oh, and in addition, honey badgers usually also feed on bee larvae by going inside the nests! Like depicted in the video above, the honey badger casually just eats the larvae amidst being stung by thousands of bees. It just doesn’t care the itch. 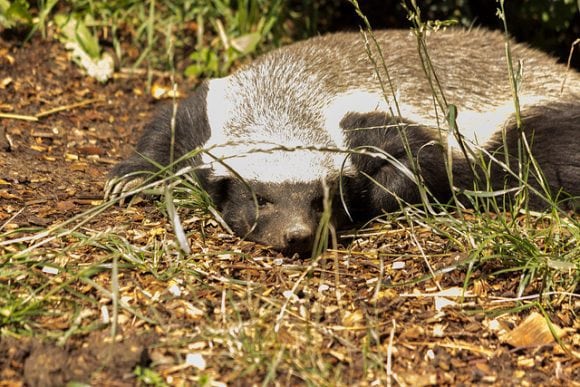 Another feature that honey badgers have for its survivability in the wild is the flexibility of its movements. Not only thick, but the skin is also fairly loose and allow the animal to have some freedom of movements.

The loose skin allows honey badgers to escape from the clutch of any predator successful enough to catch them. The honey badgers can then twist the plot by turning around and attack the predator’s face with its claws and teeth.

Yes, instead of giving in to the fate, this animal choses to fight for its life, no matter who or what it is facing. This way, the only option for the predator to beat honey badger is to kill it instantly, and it is not an easy option either.

Because of its flexibility, almost there is no safe way to carry living honey badger without the animal turning around to launch an attack to you. Indeed, it is not a rare occurrence where honey badgers get killed by larger animals, but on the other side, the animal fighting it would also suffer pretty serious injuries. 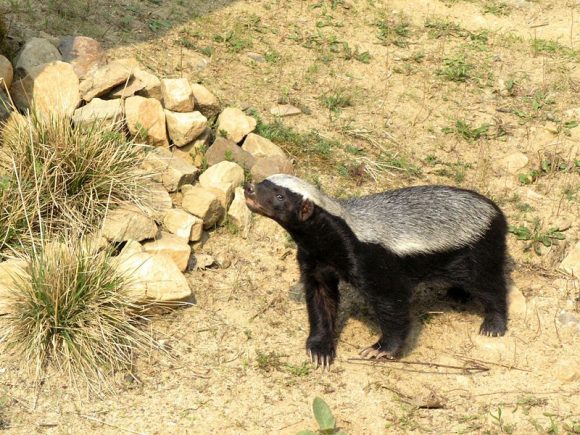 Well, we have talked about this animal as a prey, which is a pretty hard prey to conquer. However, in its nature, honey badger is a fierce animal itself. Protected by a thick layer of armor, the animal is also equipped with weapons.

They use their claws and jaws to attack its prey and predators. This animal has particularly long claws with sharp edges. Although mostly the claws are used to dig into the ground (this animal is a good ground digger), but when the claws scratch animal skin it would leave a deep wound too.

But the main weapon of honey badgers is not their claws, it is their powerful jaw which is decorated with sharp teeth. The jaw is so strong that honey badgers can use it to crack the shell of a turtle. The strong jaw is helpful for their daily use, since the animal usually eat every part of its prey, including the bones.

With those weapons armed 24/7, not so many volunteers want to mess up with honey badger. Thus, honey badgers are not really under any threat from other animals in the wild, except human-made weapons like guns.

The moral of the story is that by paying no attention to almost anything that threaten you will make you stronger and scarier. Just like honey badgers, that instead of running away with its tail between its legs from venomous snakes or big predators, they just don’t pay attention and strike back if attacked.