You are here: Home / Eureka Green / Why Did Lewis Pugh Swim In The Freezing Arctic Water?

In one cold day in September, what would you do? Would you put on the jacket and walk the dog, or would you just lay at home and warm yourself with hot chocolate? What if your friend, namely  Lewis Pugh, asks you to join them swimming in that cold day?

Maybe swimming is not something that you would do in such cold day. Let alone swimming in the coldest places on earth such as lakes in mount Everest, Arctic, or Antarctica. But can you believe that someone has done that multiple times?

The name is Lewis Pugh, and he has been swimming in those extreme places with nothing but swimming trunk. Imagine doing it yourself, even in the summer. So, why did he even bother doing such crazy thing in the cold September? 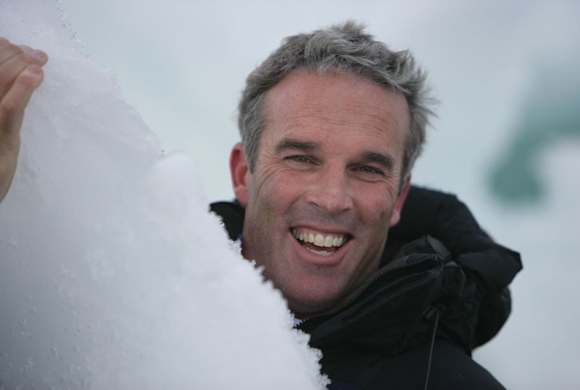 We have mentioned him above. Lewis Pugh is a British-South African swimmer born in 1969, which makes him around 53 years old by 2022. But passing the 50 ‘mark’ doesn’t make him thinking about retiring from the activity. Instead, he upgraded his swimming ability and just get more amazing year by year.

He is known to be the man who swam in famous landmarks with clear missions for the last 30 years. Even though he is known as champion swimmier nowadays, Pugh was a late learner in swimming because he only started to learn the real lessons after he was 17 years old.

What’s unique was that a month after Pugh learned swimming, he randomly swam from Robben Island where Nelson Mandela was imprisoned to Cape Town. That’s around 7,5 kilometers in distance! Not even most of us can do that in our prime.

Maybe those insane swims were the signs of Pugh’s future much more extreme swims. Lewis Pugh is today a legend in swimming, especially ice swimming one, that he has been inducted into the Ice Swimming Hall of Fame. 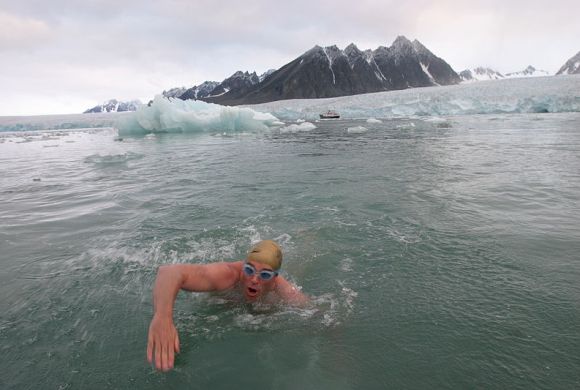 Since 2003, he started his career in swimming the most hostile, farthest, and coldest waters on this planet. He began his journey in this career by swimming northernmost point in Europe, before swimming down 204 kilometers long Sognefjord in Norway the next year.

His first world record was broken in 2005 as he did the farthest-north long-distance swim at 80 degrees north around northernmost cape in Spitsbergen. Five months later, he also broke the farthest south record one by swimming at Petermann Island off the Antarctic Peninsula.

All of those swims were done by him only using a pair of swimming trunk, goggles, and swimming cap. He never used any sophisticated swimming equipment that could help him regulate the temperature of the cold water except his own skin and the fire burning inside him.

That ‘the fire burning inside him’ is not a joke. Pugh, with years of training and experiences, can raise his core body temperature by around 2 degrees Celsius when anticipating swimming in cold water. Pugh’s ability to anticipate freezing water temperature before even entering it coined the phrase “anticipatory thermo-genesis”.

The term means creation of heat before an even. Professor Tim Noakes, a sports scientist from the University of Cape Town was the one who discovered this incredible human adaptation ability from Pugh and this phenomenon hadn’t been recorded from any other sample but Pugh. 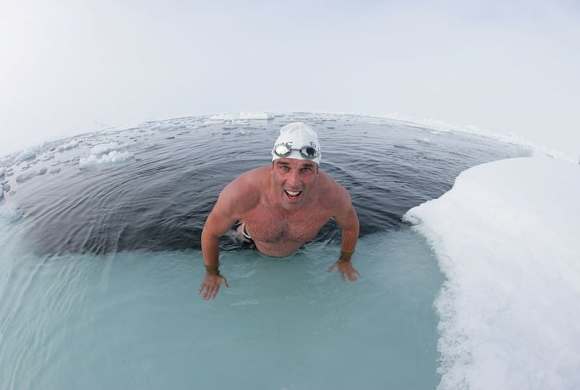 If you think that Pugh is swimming only as a hobby, you are not entirely true. So, why did Pugh do those extreme swims in the riskiest style? The answer is to raise awareness toward the condition of surrounding nature.

According to Pugh, the global coalition to cut carbon emission is not good enough to do the job. He delivered the information by swimming in place where you can witness with your bare eyes about the impact of global warming to the icebergs.

“Some nights I’d wake up and ask myself how much longer my body could keep on going. But to shine a light on what’s happening in this part of the world, it required more than a one-day swim – this story required a sustained campaign,” he said.

His recently viral environmental swim was in Greenland’s Illulissat Icefjord to deliver message about global warming to member of COP-26. COP-26 was 26th United Nations Climate Change Conference held at the SEC Centre in Glasgow.

“COP-26 is the most important conference of our lifetime and I’ll be delivering a message on what I’ve been seeing in the Polar Regions since 2003. What I don’t think the public know is the sheer speed and scale of this crisis in the Arctic – it’s the fastest warming area in the world,” Pugh explained. 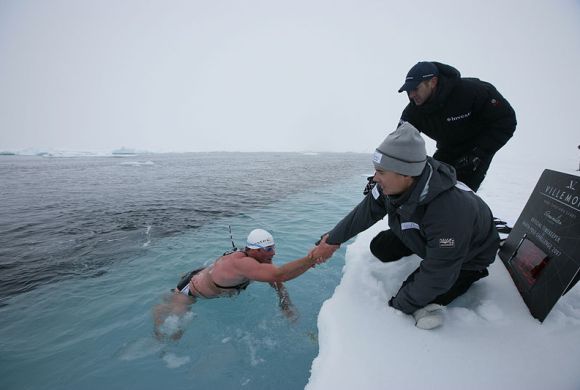 We are indeed losing the ice at alarming rate nowadays. In the last 30 years, the number is so shocking, with a total of 28 trillion tons of ice have disappeared from this planet. That’s the information that UK scientists discovered recently.

A study conducted by researchers at Ohio State University discovered worrying news. They took Greenland which is the largest body of ice on this planet and discovered that Greenland itself is losing ice 7 times faster than it used to. Of course, it is thanks to our archenemy, climate change.

“Rather than being a single tipping point in which we’ve gone from a happy ice sheet to a rapidly collapsing ice sheet, it’s more of a staircase where we’ve fallen off the first step but there’s many more steps to go down into the pit,” said Ian Howat, a co-author of the study.

Pugh himself saw the changes in the environment when he lived in Plymouth, or ‘Britain’s Ocean City’. He experienced when River Tavy overflowed. “I remember my dad going out to try and salvage the car, and the water was swirling around him. I experienced the devastation of flooding first hand.”

With his swimming, he wanted to raise awareness about how ‘warm’ the climate has been that he even had the guts to swim in the cold ice water. “I want you to imagine looking out of the window at 4am in the morning and seeing a glacier crumbling like a meringue, leading to a motorway of ice which will pour out into the sea,” said Pugh.