But what if actually this problem we are facing nowadays, pollution, is making human less and less intelligent day to day? If you still wait for the future to come, the result might not be as good as what you are expecting.

In other word, if we don’t solve our problem starting from now, we might not have the chance to solve it forever. A study conducted in China found out that air pollution is dropping human intelligence day by day.

Should we still wait for the future to come? Can we depend much on the next generation of intelligent human beings to solve all the problems? Here in this article we are going to talk about the chance.

Air pollution is the result of modern world daily activities. Most of the pollution came from fossil fuel consumption by vehicles and companies, which had not existed before modernization came. It means we are facing the enemy we’ve created ourselves.

And it is a powerful enemy, causing 4.5 million deaths of our kinds every year, in addition to wide range of illnesses. Not only that, it is also very hard for us to tackle if we don’t gather up and fight it together.

Every single living organism needs pure and clean air, even for trees too. The pollution in air is not only about carbon dioxide or carbon monoxide, but also about other toxic airborne chemicals as the result of industrial and vehicle fossil fuel burning.

Sulfur dioxide, nitrogen dioxide and particulates smaller than 10 micrometers in diameter are the examples of toxic materials in polluted air. Each of those toxic materials can cause different health problem. Thus, air pollution is one of the worst pollution we are exposed to. 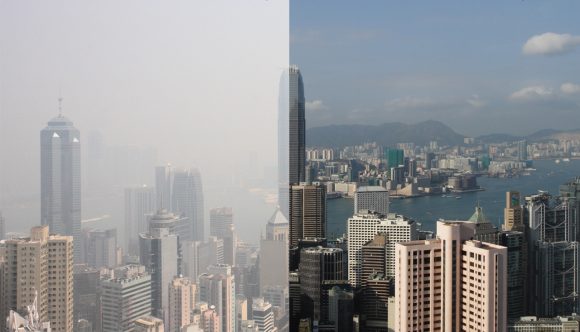 China is known as the country with the most polluted air in the world. This is the reason why researchers in the country are conducting extensive research about air pollution. Both about finding the way to combat it as well as the impacts it can cause.

From studies conducted by Chinese researchers, many physical health problems, related to polluted air in the environment, have been discovered. Apparently, The problem is air pollution not only bad for our physical health, but also for our intelligence.

The problem is, although the study was conducted in China, as the most air-polluted country, but it is relevant to everyone across the globe. The reason is because about 95% of world’s population is living in air-polluted areas.

While we are educating ourselves to tackle the problem, air pollution is reducing our intelligence worth one year of study. “Polluted air can cause everyone to reduce their level of education by one year, which is huge,” said Xi Chen at Yale School of Public Health in the US who contributed to the study.

The Longer The Bigger

But that’s not the biggest terror, newer study took samples from adults and elder citizens to find out more. And the result showed that older samples showed worse performance in the test, meaning that the older they are, the effects are worsening.

“The effect of air pollution on verbal tests becomes more pronounced as people age, especially for men and the less educated,” said the author of the study. The effects appeared to start worsening in less educated citizens after the age 44, while the more educated ones are affected after the age of 65.

With that result, it means after the age of 64, simply anyone living in polluted environment is getting the impacts. “But we know the effect is worse for the elderly, especially those over 64, and for men, and for those with low education. If we calculate for those, it may be a few years of education,” Chen said.

Age is not the only factor in this case, because researchers found another thing that may give bigger impacts in this pollution-intelligence thingy. The longer someone is exposed to air pollution, the worse the impacts.

The result of the study also proves that people who work outdoor, usually less educated men at the age around 44, are the most affected ones. “This is very worrisome as we all know that people often have to make important financial decisions in old age, such as when we should retire, which health insurance plan is better,” said Chen.

Derrick Ho, a researcher at Hong Kong Polytechnic University, said that the negative impacts might come from how stressful a polluted environment is. “It is because high air pollution can potentially be associated with oxidative stress, neuroinflammation, and neurodegeneration of humans,” he said.

For decades, air pollution was considered as a short-term problem with short term impacts. But the findings of the study proved it wrong, which mean that this problem is bigger than we thought. The longer we wait, the worse the impacts will be.

While as we said before, we need to unite as one to fight this ‘final boss’. We cannot just rely on some people to fight the ‘monster’ while we keep on polluting the air. Trying to find a shortcut is also impossible.

“There is no shortcut to solve this issue. Governments really need to take concrete measures to reduce air pollution. That may benefit human capital, which is one of the most important driving forces of economic growth,” said Ho.