You are here: Home / Eureka Green / This Cocoon Can Help Us Plant Trees Even In The Desert

When fertile lands change into desert, it hampers new trees to grow in the land. Trees are our best hope to fight climate change, and when they are not allowed to grow, then we don’t have much hope to turn the condition around.

But worry not, because nowadays we can literally plant trees in the desert thanks to the work of Jurriaan Ruys. The Dutch environmentalist developed a cocoon that can help us to plant in every single land on earth, including desert.

Here is the story of Jurriaan Ruys, and how his invention can turn this condition upside down.

A Will To Change The World 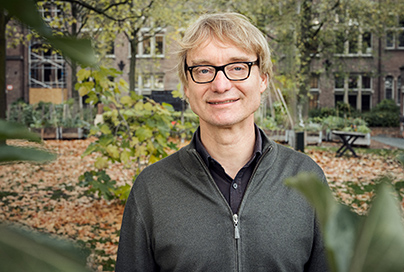 Ruys has always been an environmental activist since he was eight years old. One of the earliest activisms was when he handed out stickers to raise awareness for sea turtle, door to door in his hometown back then.

He then grew up into an engineer and worked at McKinsey with the same love for the nature. When he quit the job at McKinsey, he decided to work on fighting desertification as freelance engineer with all the things he learned and understood.

After two years of tinkering, he came into an invention that might someday change the world. Yes, that invention is the waxed-paper ‘cocoon’ that we are going to talk about. The thing is, this cocoon works so well beyond the inventor’s imagination.

This doughnut-shaped cocoon can provide young plants enough water to grow into a more stable size. Not only that, the cocoon can also protect the young plants from outside threats like weeds or animals, since it is surrounding the plant’s lower trunk.

Moreover, Ruys’ invention is biodegradable, which means that it will disappear at later time when the plant doesn’t need its presence anymore. In short, it can provide the young plants anything they need to grow from the most fragile phase into more stable phase assuring that it can grow bigger on its own.

Ruys has now become the CEO of Land Life Company with the mission to reforest 2 billion hectares of degraded land all over the world. to make it happen, the company makes use of technology, especially the cocoon.

“The Cocoon is designed to support a seedling through its critical first year. By providing water and shelter while stimulating the seedling to produce a healthy and deep root structure, tapping into the sub-surface water supply,” as explained in the website.

But seriously, how does the cocoon work? The main mission is to provide early support for the plants until it can support itself, and one of the main needs is water. The cocoon mainly works as water provider since it can save up to 25 liters of water in it.

The water contained will be distributed to the young plant with specially designed wick, so that the distribution will happen gradually. 25 liters of water can provide the plant enough water to live for about two to four months.

After that, the cocoon will gradually decompose naturally. “Everyone likes biodegradable. But it’s actually a tricky concept. You want a thing to work over a period of time, then completely disappear. It’s hard to do, which is why, as consumers, we still buy plastic,” Ruys said.

Impacts Of The Cocoon

The cocoon may seem just like a simple cardboard. But its simplicity actually gives so much benefits compared to more sophisticated others, if any. Its simplicity makes the cocoon so cheap to produce and to be purchased, giving people and governments in even poorest regions able to purchase it.

The main mission in using the cocoon is to allow the plant survive until its roots can go deep enough into the ground to finally reach ground water reservoir and extract water naturally to continue its life. It gives so much impact that the cocoon is said to be able to help plants grow in the desert, just like Ruys’ main intention to fight desertification.

And to make it more wonderful, this doughnut-shaped cardboard thingy can increase young plants survival chance significantly. Without it, usually young plants have survivability rate around or less than 10%. By planting using this cocoon, it can skyrocket up to 95%.

Since the plant is ‘educated’ to stand on its own roots, it also means that further nurturements or supports are likely less needed. “The result? Independent, healthy trees not reliant on external irrigation that can survive in harsh conditions,” as stated in the website.

Thus, not only keeping the plant alive for its earlier and most fragile phase, but it can also help people to grow plants in places that needs it the most without spending too much. We all know that making an irrigation channel is so expensive and labor extensive.

“Once the trees have gone in the ground, our job doesn’t end there. Using on-the-ground and remote sensing technologies, we can track the impact of reforestation over time and store all collected data in our Land Life Database,” as stated in the website.

All of those data will be processed with artificial intelligence to make sure that what they do is effective and impactful to the environment. “Applying machine learning, and Artificial Intelligence to the data we collect, makes us faster and more efficient so we can have a greater impact on the environment and communities around the world,” Land Life Company stated.

And with less resources to be consumed than normal plantation method, using this gadget might be the future for our reforestation and nature restoration. ““In the first year alone, the trees need at least 5 times less water compared with irrigation”, said Sven Kallen from Volterra Ecosystems, one of Land Life Company’s partner.