You are here: Home / The Species / Why Narwhals Grow Horn? Researchers Finally Discovered The Reasons

We have something to tell you about a creature with a horn. Unicorns do exist! Yes, the mythical creature does exist, but to find it in the forest like cartoons tell us might be a little bit difficult. At least, we can already find in the ocean. Meet the unicorns of the ocean, narwhals.

Narwhals are called as the unicorns of the ocean because of their unique feature. Just like how unicorns are depicted, a horse with a horn on its head, narwhals appear like small whale with a long horn on their head. But what’s actually the function of the horn?

Researchers have long tried to find out the real function of the horn. And based on their assumptions, many researchers came up with estimations either it is used as self-defense, sensory organ, or to attract mate from the opposite sex.

Those estimations have now come to the truth. Which one is the true nature? Recently, researchers finally found out the real truth.

The Origin Of Narwhal’s Horn 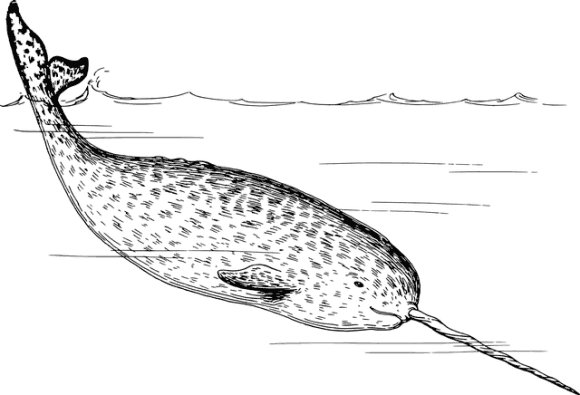 Have you ever seen a narwhal? What a unique creature it is with its horn. The horn appears like a long bone growing right at the center of its head. But don’t you know that the thing we are talking about is literally growing from inside of its head?

The horn of narwhal is actually an exaggerated front tooth of the male animal. It protrudes outside from its mouth as the cetacean grows older. What’s interesting is, the horn will keep on growing until the cetacean dies.

This is the reason why some narwhals can grow a horn up to three meters long. But there is something more peculiar in this case. The horn is actually the exaggeration of its left front tooth only, while the right front tooth remains short like normal tooth.

The horn itself is not like elephant tusk, which is dense inside and outside. Narwhal’s horn is very hard outside, but the inside of the horn is actually soft. This is the opposite of most animals’ teeth composition that’s usually soft on the outside and harder on the inside.

“No big surprise. It’s been opposite in every other way. But to find a tooth that is soft on the outside and has its most dense part around the pulp was completely odd,” clinical instructor at the Harvard School of Dental Medicine, Martin Nweeia. 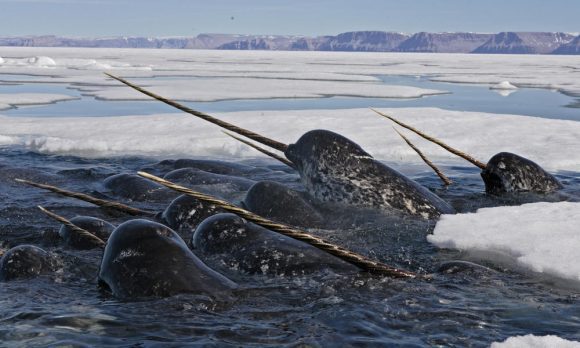 The horn, which Nweeia mentioned as a tusk “essentially built inside out”, is full of nerves inside, and the texture is very porous. “This tooth is almost like a piece of skin in the sense that it has all these sensory nerve endings,” Nweeia told BBC Earth in an interview.

The research was done by capturing several individuals and anchored them to the shore using a net. Their horns were then being encased in special ‘jacket’ that can give external stimuli mentioned above, while heart rate sensors were placed on their bodies.

With external stimuli to their horn, Nweeia discovered that narwhals could sense changes. It was proven with changing heartrate of the animal to different stimuli to the horn. But is it a sensory organ? Well, the researcher still couldn’t draw any conclusion from that.

Female narwhals don’t grow horn, yet they can live to the fullest as good as the male with horn. “But regardless of the reason, the results suggest that narwhals can funnel water into their tusks to measure its salt concentration,” Nweeia said.

A Way To Show Off? 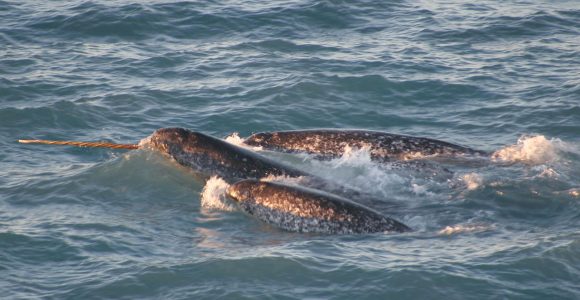 So, narwhal’s horn might be proven to be able to sense outside stimuli. But another research conducted by Zackary Graham from Arizona State University, whose study was published in the journal Biology Letters, might found another use of it.

“Broadly, I’m interested in sexual selection, which is responsible for creating some of the craziest traits in biology. As an evolutionary biologist, I try to understand why some animals have these bizarre traits, and why some don’t,” the researcher said.

Graham’s study found that the horn might also work as a way to show off between individuals. He and his team examined data collected from 245 adult male narwhals and found out that only the biggest and strongest ones can grow extra-long horns.

“The information that the tusk communicates is simple: ‘I am bigger than you,” said Graham. Most likely, the reason is because alpha males and the strongest ones can access more nutrients either by physical competition or seer intimidation.

Furthermore, with longer horns, the strongest ones can show off to their opposite sex and tell them that they are among ‘the best males’ in the group. “We also predicted that if the narwhal tusk is sexually selected, we expect greater variation in tusk length compared to the variation in fluke width,” Graham explained.

A Horn As Weapon?

Funnily, there is also a possibility that the horn is actually a real weapon. A video footage recorded in Canada shows how the cetacean used its horn to stun fish. The video showed a narwhal striking arctic cod before eating it.Just Like California, Arctic Is Burning Too Because Of Climate Change

“Kind of tracking the cod with the tusk, and as the cod was positioned close to the tip of the tusk, the narwhal sort of gave it a quick, hard tap that likely stunned the fish. It looked like it was momentarily not moving, and then the narwhal would move in with its mouth and suck in the prey,” Steve Ferguson of Fisheries and Oceans Canada explained.

In conclusion, all of the assumptions made by researchers about the real use of narwhal’s horn or tusk is right. It can sense things, it can show dominance and attract opposite sex, it can also be used as a weapon to hunt for food.

But why did it take so long for researchers to find out the truth? There is one good reason for that, because narwhals are highly elusive. In fact, there is not a single individual is currently being able to be brought into captivity.

Researchers usually study a species after bringing it into captivity for accessibility reason, but narwhals are too elusive for that. Thanks to advancement of technology nowadays, we can finally find the truth behind narwhal’s horn.

The Un-Bearly Facts About Koala Bears

Unique Ways Indonesia Do To Save Their Tuna Population And Production