You are here: Home / The Species / Let Us Introduce Our Newest Environmental Warrior: Patrick Star!

Our ocean has chosen a new hero. The chosen one is not the bulkiest around, neither the best strategist, nor the fastest animal in the neighborhood. Instead, the new hero is the cousin of Spongebob Squarepants’ best friend, Patrick Star.

The hero we are talking about is a species of sea star the sunflower sea star. The sea star is on a mission to restore a ruin back to its glory days. Well, maybe at least something like that. The real mission is actually to restore ocean kelp cover.

And conduct the mission, what the sunflower sea stars have to do is just eating as much as they want. Pretty suitable job for the cousin of Patrick Star, isn’t it? But how can just eating become an activity that can save the planet?

Here in this article, we are going to talk about this unique job of saving the planet by sunflower sea star. 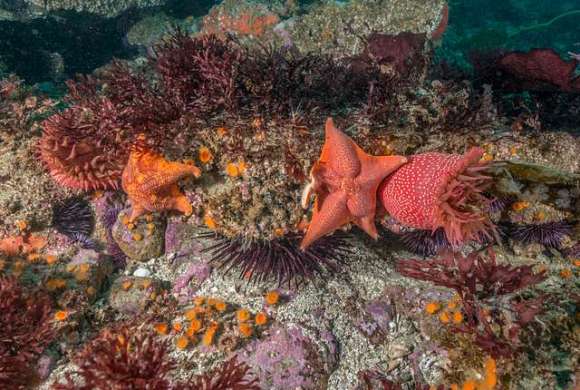 The story starts with a Bizarre Love Triangle from New Order. Just kidding, we are not talking about the beautiful song in this article. But it is indeed a real bizarre love triangle between kelp, sunflower sea star, and purple urchin.

It can be broken down this way: sea star loves eating purple urchin, and it is the natural predator of the creature.  While purple urchin loves the kelp growing inside the water nearby. In addition to that, kelp loves sea star, because it protects them from ‘naughty’ urchins.

Yes, some urchins are actually so naughty that they will eat all the kelps without letting the aquatic plant to regrow. The problem is, this bizarre love triangle doesn’t work when one of them is missing. Things will get weird immediately.

In example, just like hat actually happens today, the population of sunflower sea star is declining. As a result, the population of their lovely snack, the purple urchins, go uncontrolled. It directly affects the number of kelps growing in the neighborhood.

To bring the balance back into the water body, the missing sunflower sea star has to come back to save the day. Yes, just like the story of Avatar Aang confronting Fire Lord Ozai after the Fire Nation invasion to the whole world. 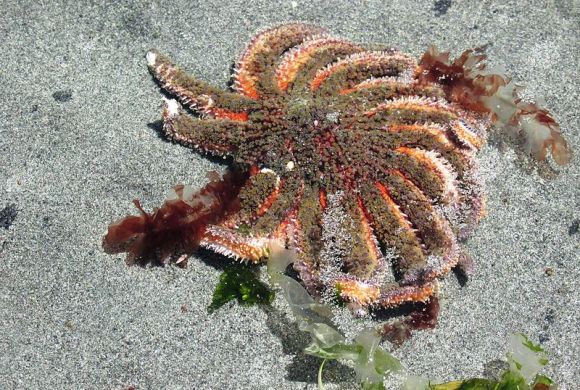 Avatar Aang was trapped in a giant ice when he was missing for 100 years. So, where did the sunflower sea stars go when they were missing? The answer is quite startling, because they literally just melt and become one with the ocean.

In fact, 5.75 billion sunflower sea stars melted between 2013 and 2017, which was actually more than 90% the sea star’s global population. The main cause for that phenomenon is uncontrollable rise of sea temperature.

The sea stars couldn’t survive living in the warmer water, and died because of a disease called ‘wasting’. Warmer water makes the disease spread faster. “What we think is that the warm water anomalies made these starfish more susceptible to the disease that was already out there,” said Joe Gaydos, the science director at the University of California.

The disease has killed a lot of sea stars since 2013, and researchers said that this is the worst disease epidemic in marine animals. “To think that warmer water temperature itself can cause animals to get disease quicker, or make them more susceptible, it’s kind of a like a one-two punch,” Gaydos continued.

And because of losing too many sea stars, Pacific Ocean is now being invaded by purple urchin. But this thing actually creates a domino effect that further even led into a devil loop. Things really went downhill quickly from there. 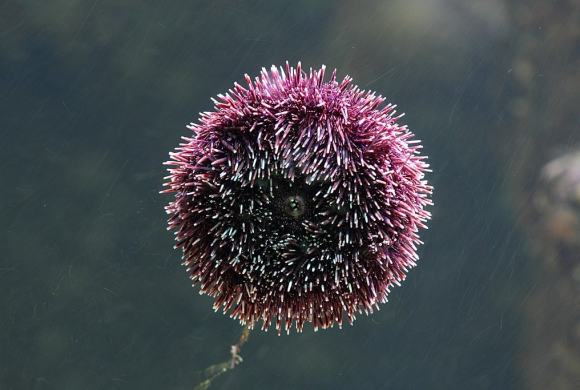 Let’s talk about what happened in the Pacific Coast. Since 2013 when the ‘wasting’ disease took its huge toll on sea star population, the number of purple urchins living in the area went into a boom. The rocks in the area which once were full of sea stars, became full of urchins.

“We see these big urchin barrens where the urchins have gone through and eaten all the kelp,” said Gaydos. “We have higher biodiversity when we have more kelp. So, it’s setting off a cascade. If you looked on land, it would almost be akin to clear-cutting a forest.”

A lot of methods were suggested to clear those naughty urchins of the Pacific Coast, including catching them one by one to make sushi. That was the suggestion from Norwegian company called Urchinomics, but still researchers think the best method is to reintroduce sea stars.

Growing in A Lab 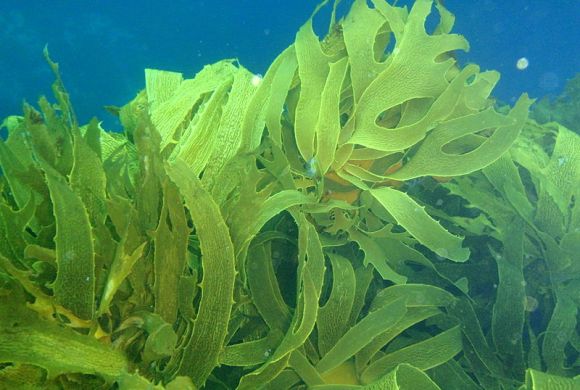 Reintroducing sea stars is not an easy job to do, especially when the population of it in the wild is already rare. There is also no guarantee that they will survive the rising heat because we are still facing global warming.

To solve that problem, researchers are trying to grow sea stars in the lab. The lab-grown sea stars are designed to survive living in the warm water better, and have better resistance to the ‘wasting’ disease that has eradicated their predecessors.

“I don’t see that we’ve got any other options. They’re not capable of bouncing back on their own. We have to do something,” said Laura Rogers-Bennett as quoted from Bloomberg. Rogers-Bennett is the researcher who has documented the kelp die-off.

While the sea star population collapse is caused by a disease known as ‘wasting’, there are many others who have not realized that there is something more dangerous than the disease. It is called irresponsible human activities.

“We are removing key members of the food chain by overfishing, climate change, and other ecological insults. If you don’t look too carefully, an ecosystem looks robust. But then it can take just one more insult to bring the whole structure down,” said Jason Hodin, senior scientist at Friday Harbor Labs where the breeding project is done.