You are here: Home / Hello Earth / What You Need to Know About Australia’s Recent Drought

Drought is not a simple thing, especially for farmers. Australia had its worst drought and driest time last August and September. Forecasts expected that spring rains are going to come, giving a little bit of quench to the arid lands.

Now, Australia has always been a drier country/continent and it has experienced regular droughts. However, it’s getting a lot hotter with not much of rain. As a matter of fact, Autumn of 2017 in southern Australia was the driest for 116 years. And 2017 was also the hottest year ever in New South Wales.

The east coast part of Australia has recorded less than a fifth of the usual rainfall for three months. New South Wales was even declared 100% in drought. The winter crops failed, livestock died, wheat production was at its lowest in a decade, wool clip and wine crush would drop and crop protection companies also suffer an early annual loss.

According to Australia’s Bureau of Meteorology, this drought is in fact the second driest season ever recorded in the country. It will take months to restore soil moisture, since it became so dry. Sometimes it rained, but only lightly and it didn’t solve the problem.

Matt Dalgleish, trading manager of an agricultural consultant called Mecardo, said, “For the grain side of things it’s too little too late and I’d imagine it’s probably the same for sheep areas. There might be some cattle producers, if they’ve still got stock, to get a little bit of growth in pasture but it’s probably not going to be enough to carry them through summer.”

Read also: What you need to know about Global Clean Water Crisis

There are no grazing land for the livestock, so some farmers hand feed their stock so that they will survive. Some weren’t so fortunate. A farmer called Megan Kuhn runs beef cattle and merino sheep. She and her husband had 400 breeding cows which were going to give birth in matter of weeks.

Sadly, some of these cows had to leave the farm because they were sold to an abattoir. The cost of feeding the animals has become unbearable that they resorted to this way. Kuhn said, “There is nowhere to send them to pasture so they are going to be slaughtered.”

“We’re killing a cow and a calf at this late stage of pregnancy. The drought is so widespread there’s just no options left for stock producers to put them anywhere. That’s why it’s so heartbreaking. Australia doesn’t realise. The cattle we’ve got are rapidly diminishing because of the drought,” she continued.

Some farmers even have permission to shoot kangaroos that compete for pasture. And not only that, this drought has led farmers to depression and suicide, it’s horrible for all.

Read also: Climate Change Is Trying To Poison Us With Toxic Weed 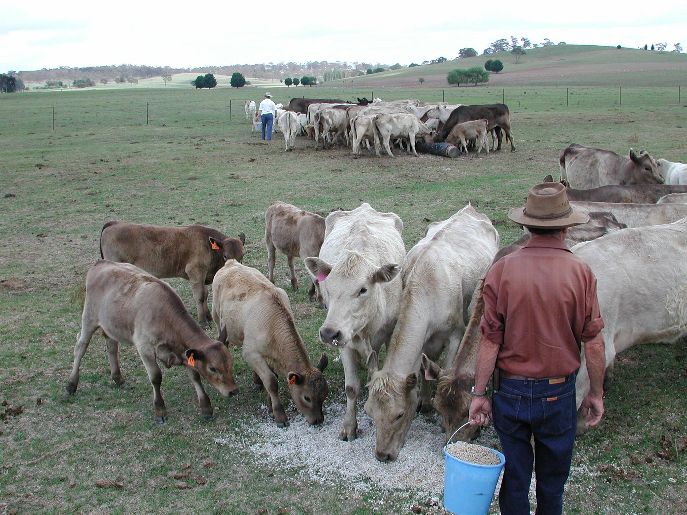 Another sheep farmer from New South Wales, Lindy Piper said, “I have lived here since 1982 and there have been some very tough times and droughts, but this is by far the worst I have ever seen our farm,”

“What concerns me most is the widespread nature of it – from where are we to source grain even if we can afford it? We had no harvest last year and none this year along with most other farmers in south-east Australia,”

“We, my husband and kids and I, have worked very hard all our working lives to improve the land and our sheep enterprise. It is very hard to see the state of the land now. Many farmers cannot take a break because of the constant feeding of stock and are pretty exhausted.”

As if it weren’t hard enough for Australian farmers and livestock, bushfire season in summer is also going to be a threat to dry areas. Australia needs to be prepared for the worst that might happen.

Read also: These Food You Consume Contribute a lot to Water Footprint

The drought that could never end

“These regions experienced increasing intensity and frequency of hot days and heat waves over the past 50 years, in turn increasing drought severity,” said Lesley Hughes, a professor of biology at Sydney’s Macquarie University and councillor with the Climate Council. She further clarified that the source of the problem is something complex.

Hughes also said that the climate change “has contributed to a southward shift in weather fronts from the Southern Ocean, which typically bring rain to southern Australia during winter and spring.”

Because weather that carries rain is shifting away from the Southern Ocean, Australia will expect more droughts, particularly in agricultural areas such as the Murray Darling Basin in New South Wales.

As rain-inducing weather fronts drift away from land to the Southern Ocean, the risk of drought has increased, especially in agricultural heartlands such as the Murray Darling Basin in New South Wales.

Benjamin Henley, a researcher at the University of Melbourne agrees with this. “Climate model projections suggest that with anthropogenic emissions, the storm track will shift south, reducing rainfall [over land] in the south,” he said.

“Higher temperatures during droughts, which influence evaporation rates, can be due to both the lack of rain itself, and the higher probability of warmer temperatures due to climate change,” Henley explained the significance of global warming to Australia’s drought.

Henley has also been researching about rainfall pattern during cool and warm season that has been going on for over 800 years. He and his colleagues want to understand if this recent drought and the previous ones are particularly unusual.

Even though Henley stated that the drought was caused by natural climate variability, he understood that it would get worse with climate change, as rainfall projections kept on drying.

Hopefully rainy season will come soon to the dry areas of Australia and save the lives of the livestock, agriculture, and also people who depend on water. And while we still can, let’s keep on doing positive things for the environment so that this kind of drought won’t happen again in Australia and places around us.

Want to know how you can make a change through simple steps? Check out this article to find out. If you’re from Australia and you have the firsthand experience of this drought, tell us what you have in mind in the comments below.