There is no greater loss than the death of a beloved ones. All of us will experience it at least once because this is the work of destiny. And although it is okay to mourn for the biggest loss in our lives, we have to go on.

But apparently we are not the only species on this earth that can feel the loss. In animal kingdom, there are many other species that can feel it too, especially animals. Yes, animals can also mourn for the loss of beloved ones.

Many animals are known to show empathy for deceased others, despite how savage they seem. And in this article, we will show you how a mother’s love is shown to her deceased child. Here is the story of a mother orca that carries the body of her deceased calf.

Waiting for the birth of your own baby might be the most special feeling you will ever experience as a mother. Nothing is greater than thinking about the baby that you are welcoming, who will hold all of your dreams and hopes.

It is a kind of motherly instinct, and most likely every single female animal on earth (we are scientifically an animal too) are born with this instinct. Thus, human is not the only ones which can catch this feeling.

If you still don’t believe us, we can show you the prove. One of the cruelest animal on earth, killer whales or orcas, are known to show this feeling too. Researchers have found that whales have very strong bond with their calves.

Mother orcas always stay around her calves and train them to do anything. The mothers teach the calves how to breathe air, swim, hunt for food, and cooperative works. Basically everything the calves need to know to be a good whale.

If you are able to follow the growth of a killer whale calf from the birth, you will notice how much attention and love that the mother gives. Thus, it is not strange at all to assume that even before the calves are born, mother orcas have already loved them.

And this is the sad story, a mother orca was spotted to drag the body of her dead calf. It is actually not a new thing, because researchers have spotted such kind of thing happens all the time. So, what’s special about it?

Usually, mother whales only carries the dead body of of her calf for only about a week. However, this mother orca carries her dead calf more than twice the amount of time, exactly 17 days, around wherever she swims.

The mother, known as J35 or Tahlequah, known to give birth to a baby calf at July 24 after one year and a half carrying it inside her womb. As a mother, it was her instinct to nurture the newborn calf by taking it up to the surface, teaching the calf to breathe air.

However, her happiness didn’t last very long, about 30 minutes after birth, the newborn calf died. Grieving after her dead calf, she carried the deceased newborn baby on her forehead, and pushing it towards San Juan Island in Pacific Northwest.

She tried her best not to let the body of her calf drown in the cold water and stayed floating near the surface all that time. Tahlequah swam away, followed by 6 other members of the group towards the island, in a journey of love driven by her loss. 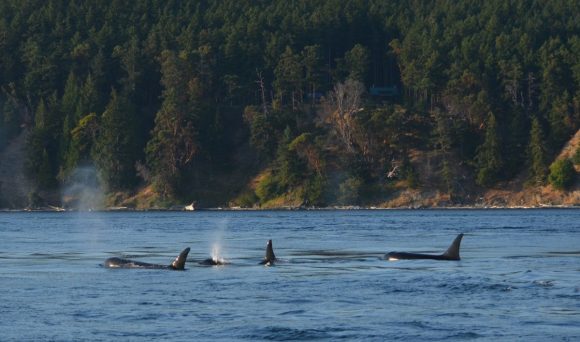 A group of researchers from Center for Whale Research followed the group to observe what they will do to the dead body. Apparently, the group of whales wanted to give a goodbye ceremony to the deceased young member.

“They gathered at the mouth of the cove in a close, tight-knit circle, staying at the surface in a harmonious circular motion for nearly two hours,” as stated by a team member of the researcher group to BBC.

“As the light dimmed, I was able to watch them continue what seemed to be a ritual or ceremony. They stayed directly centered in the moonbeam, even as it moved,” she continued. This is not a strange thing, researchers have known that orcas usually do this ceremony as a farewell to their deceased members of the group.

But the ceremony didn’t stop there, at least for the mother, because she stayed with the deceased baby for longer time. As mentioned before, she continued to carry the body up on her forehead for 17 straight days.

She brought the body everywhere she went to, accompanied and protected by the rest of the group. “Maybe this is just her own way of just getting past the loss of another baby. She’s probably lost two more in the past decade,” said Ken Balcomb, a member of Centre for Whale Research, who studies the Southern Resident whale population.

Seems like there was nothing special about what Tahlequah has done, but researchers said that she set the record for her own tragedy. “It’s got to be tragic for these animals to lose these babies, and it’s happening at a record pace,” said Balcomb.

She did it constantly for 17 long days, like she didn’t ever want to lose her precious calf. “We’ve seen mother whales carry dead babies briefly, for parts of a day. We saw one a few years back for a couple days. But this sets a record,” Balcomb continued.

At the 17th day, Tahlequah set free of her dead calf’s body and let it drown into the deep sea. “Her tour of grief is now over and her behavior is remarkably frisky,” as a statement from Centre for Whale Research said.

Before, for straight 17 days, Tahlequah didn’t participate actively in any group works, like hunting for food or having fun. But after she let the body go, she was sighted to “”vigorously chased a school of salmon with her pod-mates in Haro Strait”.

The cause of the calf’s death is still a mystery up until now, but researchers predicted that it was not really natural. “It is human actions that are responsible for the dead and stillborn calves, the sick and starving adults and the declining condition of the environment in which they live,” said Stephanie Solien, an environment activist.